Home » Politics » No, Nancy Pelosi Was Not ‘Dancing In The Streets Of Chinatown’

When moderator Kristen Welker asked Trump what he would do if the U.S. experiences another surge in COVID-19 cases this winter, the president blamed seemingly everyone but himself — including by falsely claiming that House Speaker Nancy Pelosi (D-Calif.) was “dancing in the streets of Chinatown.”

Trump was referring to Pelosi’s visit to San Francisco’s Chinatown, part of her congressional district, on Feb. 24, several weeks before COVID-19 cases began to surge in the United States. She was there to show solidarity for the neighborhood, walking around with community leaders and eating lunch at a dim sum restaurant, in order to assuage anti-Asian sentiments amid fears of the coronavirus. 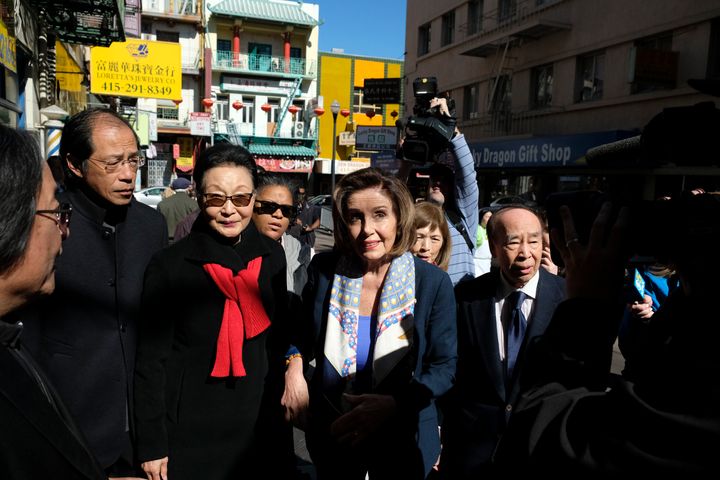 At that point, many Asian-owned businesses around the country had experienced a precipitous drop in sales and patronage because of racism related to the coronavirus, which first appeared in Wuhan, China, and had been spreading across parts of Asia.

Throughout this year, Asian Americans have experienced an avalanche of COVID-19-related racism. Since March, a group of advocacy organizations and scholars called STOP AAPI HATE has collected and received reports of more than 2,700 racist incidents, with respondents from nearly every U.S. state.

This week, the group released a report concluding that Trump is by far the biggest “superspreader” of anti-Asian racism catalyzed by the pandemic. The president frequently uses racist slurs and epithets to refer to COVID-19, and he blames and scapegoats China in order to deflect from his own mishandling of the public health crisis.

Trump has previously trotted out his lie about Pelosi’s Chinatown visit, mischaracterizing and embellishing the story during his White House COVID-19 briefings, according to FactCheck.org. At a White House event in May, he falsely claimed that the House speaker encouraged international tourists to “bring your infection.”

“She’s dancing in the streets of Chinatown, trying to say, ‘It’s OK to come to the United States. It’s fine. It’s wonderful. Come on in. Bring your infection with you,’” he said.

Pelosi did not say that.

The president’s “bring your infection” comment calls to mind racist tropes about Chinese people being disease carriers. These xenophobic attacks have persisted since the 19th century, when Chinese immigrants who arrived in the United States were labeled as harbingers of the “yellow peril.”

During Thursday’s debate, Trump kept playing into these racist fears and stereotypes, among many other racist comments he made on the stage. For example, in response to a question about climate change, he referred to China and India as “filthy.”

Yet, he falsely and bafflingly declared himself to be “the least racist person in this room.”