Home » Politics » Pelosi rips Trump for 'disrespect,' slams McConnell for 'standing in the way' of Democratic agenda at DNC 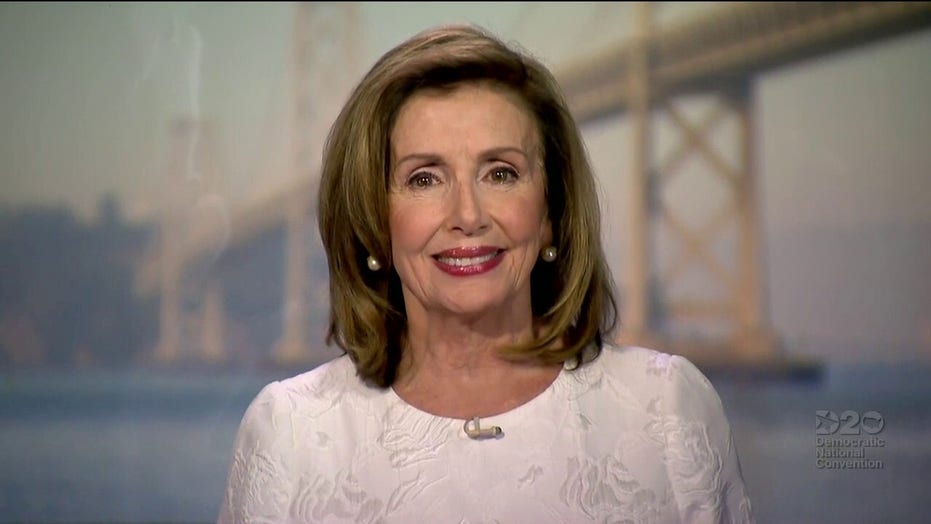 Speaker of the House Nancy Pelosi speaks at the third night of the 2020 Democratic National Convention.

“Who is standing in the way? Mitch McConnell and Donald Trump,” Pelosi, the highest-ranking woman in the federal government, said. “Our nation faces the worst health and economic catastrophe in our history.”

She said McConnell and Trump have been blocking legislation to lower prescription drug prices, rebuild the nation's crumbling infrastructure and update the Voting Rights Act, among other issues.

"We have sent the Senate bills to protect our dreamers, to advance LGBTQ equality, to prevent gun violence, to preserve our planet for future generations, and even more," she said. "All of this is possible for America. Who is standing in the way? Mitch McConnell and Donald Trump."

Pelosi's speech during the convention's third night, when the party will nominate Kamala Harris as vice president, making her the first Black woman to appear on a major political party's presidential ticket, comes amid a high-stakes stalemate between Democratic leaders and White House officials over another coronavirus relief package.

Led by Pelosi, Democrats have pushed for an extension of the $600-a-week unemployment benefits and $1 trillion in aid for cash-poor state and local governments. But Republicans, worried about the nation's ballooning deficit, are arguing for a pared-down stimulus package. The subsequent impasse has put at risk potentially trillions of dollars in aid for American families and businesses.

CNN AVOIDS ON-AIR COVERAGE OF BIDEN'S 'ARE YOU A JUNKIE?' REMARK ABOUT TAKING A COGNITIVE TEST

"Our nation faces the worst health and economic catastrophe in our history," she said. The virus has infected more than 5.5 million Americans, the highest in the world, and killed at least 175,000, according to data from Johns Hopkins University.

The California Democrat, wearing a white jacket in a nod to the suffragist movement, also paid tribute to the 100th anniversary of the ratification of the 19th Amendment giving women the right to vote.

Pelosi is the first and only woman to have served as speaker of the House of Representatives. She held the position from 2007 and 2011 and was elected to the position again in 2019 after Democrats reclaimed control of the House.

She painted Trump as an enemy to women in her speech, saying she's witnessed "firsthand Donald Trump's disrespect for facts, working families and for women in particular — disrespect written into his policies toward our health and our rights, not just his conduct."

"But we know what he doesn’t: that when women succeed, America succeeds," she added.