Home » Politics » Several Democratic senators say they're against cannabis legalization, busting claims that the filibuster is the only obstacle in the way of reform 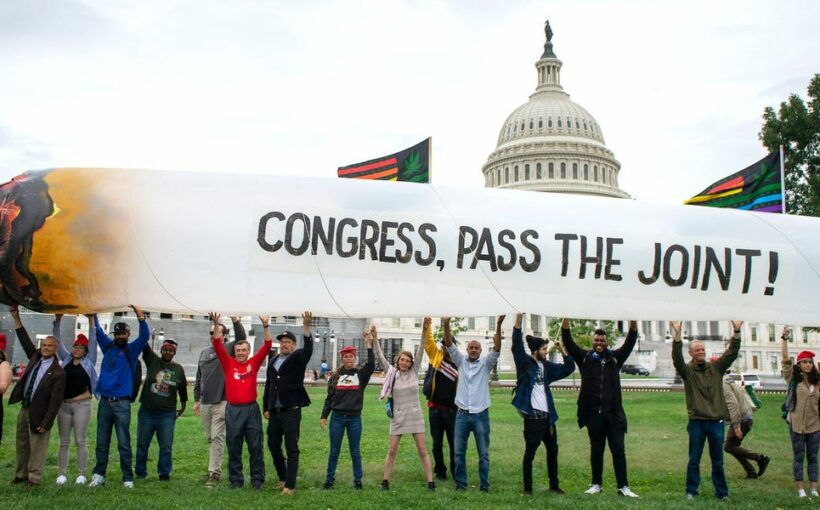 The cannabis industry has had lots to be excited about this year regarding prospects for federal legalization of the drug. Its stocks soared in February after Senate Majority Leader Chuck Schumer announced he’d prioritize ending the federal prohibition on cannabis.

That followed prior gains in response to Joe Biden’s presidential win and Democrats gaining a Senate majority after the January 5 Georgia runoffs.

But Insider interviews with several senators on Capitol Hill show Democrats aren’t united on the issue, and the prospect of decriminalizing marijuana at the federal level this Congress isn’t as high as the industry envisions.

Six Democratic senators said they were leaning against federal legalization or were non-committal.

“I personally am not somebody that thinks it should be legalized,” Sen. Jon Tester, a Democrat of Montana told Insider. “But in the end, the states are usually ahead of us on issues and this is probably one they are ahead of us on.”

His state approved adult use of cannabis through a ballot measure in the November elections, and he said the Senate “ought to have a debate about it.”

Sen. Jeanne Shaheen of New Hampshire said she was worried about what wide-scale availability of cannabis would do in her state, which has been ravaged by opioid addictions, overdoses, and deaths.

“Sadly I think there are real concerns about whether marijuana is an entry-level drug for some people and therefore I would like to see more data on how this is working before moving forward nationally,” she said.

And the Senate’s most conservative Democrat, Joe Manchin of West Virginia, said he was “all for” medical marijuana but added he hasn’t “gotten there yet” on legalizing the drug for recreational use.

“I’m still looking at everything,” he added but declined to explain the reason for his reservations.

With their slim Senate majority and not enough support in their caucus, Democrats would need some Republicans to come on board, but there seems to be a short supply of GOP senators who would back legalization.

The lone vocal Republican proponent of decriminalization, Sen. Rand Paul of Kentucky, said he was puzzled that Democrats hadn’t reached out to him about the effort, calling himself “one of the possible gets.” He added, however, that he did not support adding taxes and regulations to products as Democrats have proposed.

“I’m open to discussion but so far nobody has called,” he said.

Sen. Roy Blunt, a Missouri Republican — who is retiring after his term ends in 2022 —  said that while he’s never been “particularly comfortable” with full legalization, he’d have to see how the bill was written before deciding his stance on the issue.

Two Republicans said the Senate should support businesses already operating rather than decriminalize the drug at the federal level. One of them, Sen. Lisa Murkowski of Alaska, told Insider she was “not so keen” on federally decriminalizing cannabis.

Sen. Susan Collins of Maine, a Republican with a bipartisan voting record, is not in too.

“I can’t imagine it being a priority with all the issues facing our country,” she said. 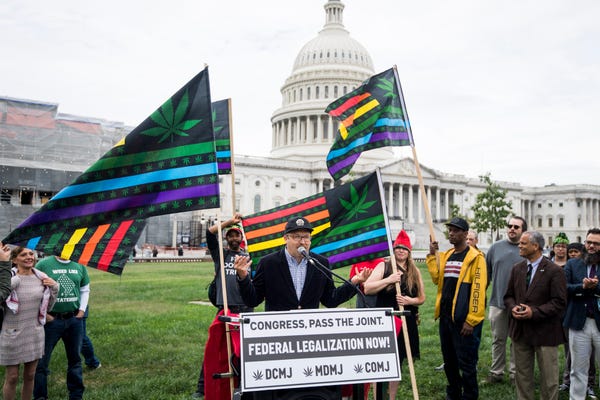 ‘Overestimating the odds of legalization’

Some progressive lawmakers including Rep. Ilhan Omar, a Democrat of Minnesota, along with cannabis industry executives and analysts, have said that the filibuster is the main obstacle to federal cannabis reform.

But the Insider interviews show that decriminalizing cannabis at the federal level would be difficult even if Democrats abolished the filibuster, which sets a 60-vote threshold to pass most legislation.

If they nixed the filibuster, Democrats would still need 51 votes to pass any legislation, including a tie-breaker from Vice President Kamala Harris. Because of the Senate’s 50-50 breakdown, a single Democratic defection can torpedo a bill.

The Democrat-led House last year passed the Marijuana Opportunity Reinvestment and Expungement Act, or the MORE Act, a sweeping cannabis decriminalization measure. The GOP-led Senate did not take up the measure.

Analysts from the investment bank Cowen said in a January note that they didn’t envision the MORE Act — if it were reintroduced — passing without the filibuster being eliminated. They added that investors in cannabis companies like Tilray, Aurora Cannabis, and Canopy Growth were likely “overestimating the odds” of federal decriminalization.

Cowen predicted in another note published Wednesday that a filibuster repeal would result in Democrats going bold on cannabis legislation. By doing so, the bank warned, Democrats would risk losing the support of centrist members of their party.

Banks and credit card companies are prohibited from serving weed businesses because the drug remains illegal at the federal level.

Bayern added that he views federal legalization as more likely in the second half of Biden’s term if Democrats hold on to the House and expand their Senate majority after the 2022 midterms. Curaleaf is the largest cannabis company in the US by market capitalization and has a growing lobbying presence in DC.

Despite the political hurdles, cannabis legalization is popular among voters. Gallup polling last year found 68% of voters support legalization, including 79% of 18-to-29 year-olds. Republicans, however, remain divided on the issue: 52% say cannabis should remain illegal.

Some states such as Arizona and New Jersey voted for legalization in November. And New York Gov. Andrew Cuomo, a Democrat, said Monday that he expects that a deal will get done on cannabis legalization before April 1. 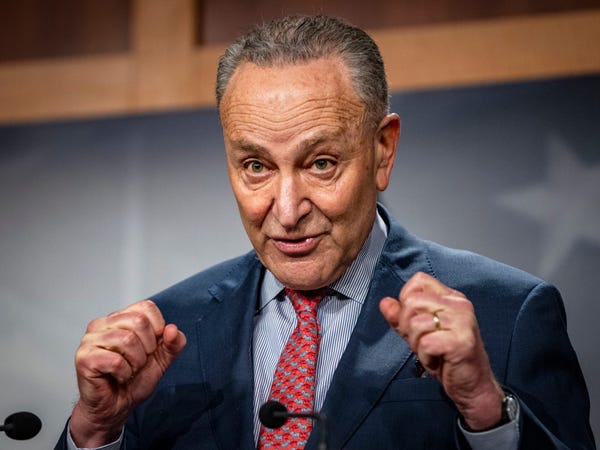 Open to other reforms but not decriminalization

Schumer has said he is working on a new legalization bill with fellow Democratic Sens. Cory Booker of New Jersey and Ron Wyden of Oregon, who leads the Finance Committee.

The senators previewed the yet-to-be-introduced bill in February, which would end the federal prohibition on marijuana and also implement taxes, regulations, and criminal justice reforms.

“I’m in this for the restorative justice elements of it, so it’s not just about legalization, it’s really making sure we’re expunging records, investing in communities that have been disproportionately targeted,” Booker told Insider Monday.

Neither Booker nor Wyden would say how similar their bill would be to the MORE Act. That bill had many of the components Booker, Schumer, and Wyden are talking about. Harris had introduced its Senate companion in 2019 when she was still a senator.

“I have a lot of hope in this Congress,” Booker said. “I can’t give you too much of an update just because conversations are ongoing, but I hope that we are going to make some real strides this Congress.”

Other senators were less certain. Democratic Sen. Jeff Merkley of Oregon, a longtime proponent of decriminalization, said he didn’t think Democratic leaders had polled their caucus about it.

“There is a sense of how modest or how large a bill is going to be,” he said. “So there are some folks that say, ‘Well I support that component but I want to see a bigger bill,’ and, ‘I don’t want to do this piece without it,’ so we have got to resolve those tensions and have a pathway that we can get everybody on.”

Some of the Democrats Insider talked to said they had reservations about all-out legalization. Sen. Ben Cardin, a Democrat of Maryland said he had to “think about” it. Sens. Bob Casey of Pennsylvania and Debbie Stabenow of Michigan, both Democrats, said they hadn’t studied the issue enough.

Some senators signaled they were open to other reforms short of decriminalization, especially those that made it easier for cannabis entrepreneurs to do business. Paul of Kentucky said he thought a bill to let cannabis companies deduct business expenses would get 60 votes in the Senate.

Paul, Cardin, Collins, and Murkowski all said they would like Congress to make sure that cannabis businesses could access banking and financial services rather than continue relying solely on cash.

House Democrats last year tucked a cannabis banking bill into both of their coronavirus aid packages that passed in that chamber. The then-Republican Senate didn’t take up either package, or vote on the Senate version of the cannabis bill, the SAFE Banking Act, introduced by Merkley.

Democrats also did not include it in the $1.9 trillion relief package that Biden signed into law last week. But it’s coming back this Congress: A bipartisan group of House lawmakers re-introduced the SAFE Banking Act Thursday and it’s expected to be re-introduced in the Senate next week.

“My role as I see it is to make sure that everybody who is operating within the law is protected within the law,” said Murkowski, whose home state of Alaska decriminalized cannabis for recreational use in 2014.

She said one issue she was concerned about was potential robberies at weed shops whose customers can’t use debit or credit cards, and therefore keep cash in their stores.

“And right now the biggest challenge that we have within this lawful industry in the state is safe banking,” Murkowski said. “People know that you go to this shop and they have cash, they’ve got lots of cash. It’s not a good situation.”

This story was originally published on March 17 and has been updated to reflect the latest developments.