A co-chair of the Spokane, Washington, chapter of the Democratic Socialists of America says unidentified law enforcement agents arrested him while he was walking to a Black Lives Matter protest last weekend, put him in an unmarked van and detained him for more than a day as federal agents attempted to interview him.

The arrest, which two of the activist’s friends witnessed and confirmed to HuffPost, follows a disturbing trend of law enforcement snatching protesters off the street this summer, often without identifying themselves.

Jeremy Logan — a 40-year-old DSA member, tenants rights organizer, and owner of a painting company ― believes the whole ordeal was either an attempt to pressure him into providing intel on his fellow anti-fascist activists, or retaliation for past statements he’s made criticizing police.

The local sheriff’s office later confirmed to HuffPost that it carried out the arrest. The Spokane DSA is now calling for a “full investigation” into the incident, while the sheriff — who’s made previous statements lashing out at “antifa” — is accusing Logan of lying about what happened.

It all started at around 1:30 p.m. on Sunday, Aug. 30, Logan told HuffPost, after he parked his car near the site of a protest against police brutality in Spokane. As he walked to join up with a few friends on their way to the protest, Logan says he found himself suddenly apprehended by two men, one of whom wore a green tactical vest and was carrying a gun.

About four other men, all in plainclothes, also suddenly surrounded Logan. They threw him into the back of an unmarked silver Dodge Caravan, telling him he was under arrest for an outstanding warrant.

Two of Logan’s friends, William Neville and Quinna B., witnessed the arrest and confirmed his story to HuffPost. “It was scary,” said Quinna, who asked that HuffPost not use her full name.

Logan says the officers never showed him a badge and repeatedly refused to identify the agencies for which they worked. They also made contradictory statements about the alleged warrant, at different times saying it had been issued in Chelan or Okanogan counties. Spokane, where the arrest took place, is in Spokane County.

Logan says the officers drove him in the van to a rendezvous point four or five blocks away, where he was put in a Spokane Police Department car and taken to the county jail downtown.

He was detained until Monday evening, when he was released after his father paid a $500 bond. HuffPost viewed a receipt of the bond payment.

A spokesperson for the Spokane Police Department confirmed to HuffPost that one of its officers transported Logan to jail on Sunday, but said the department was otherwise uninvolved in the arrest.

The Spokane County Sheriff’s Office initiated Logan’s arrest, Cpl. Mark Gregory told HuffPost in an email, “because we learned he had a valid felony warrant.”

“He has made threatening public statements toward law enforcement in the past,” Gregory said, although he would not elaborate on the nature of the supposed statements. (Logan laughed at the accusation that he’d somehow threatened cops. “I’ve been really critical,” he said, “but never made a threat of any kind.”)

Logan, by his own admission, has an open warrant in Douglas County from 2013, due to unpaid fines.

Gregory said the warrant in question stems from a failure to appear in court on charges of drug possession. Although Logan also admits to previous drug-related arrests, he denies having any open warrants for not showing up in court.

Gregory did not answer HuffPost’s questions as to why the sheriff’s office suddenly needed to arrest Logan on a years-old warrant from a different county as Logan was on his way to a protest against police brutality.

In a separate statement, Spokane County Sheriff Ozzie Knezovich lashed out at HuffPost for writing this story.

“I know it is difficult for the Huffington Post to understand the rule of law,” the sheriff said. “They seemed to have forgotten we are a country of laws. They’ve also forgotten their duty to our country to provide unbiased, factual reporting per the protections provided by the Constitution of the United States.” 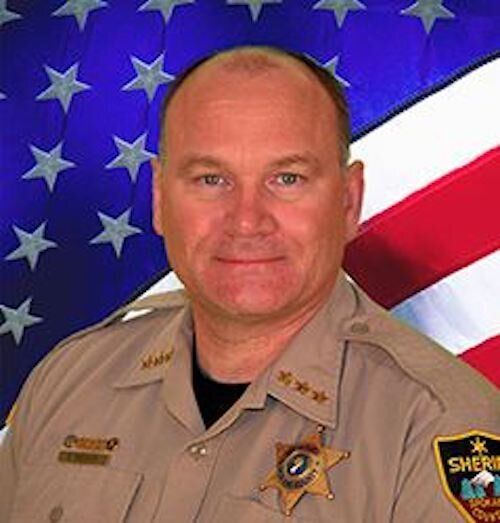 Earlier this summer, Knezovich claimed that “antifa,” or anti-fascist activists, from out of town were responsible for some property destruction in Spokane during a May 31 demonstration after the police killing of George Floyd in Minneapolis. Knezovich has never provided any evidence to support this assertion.

His rhetoric echoes fearmongering by other law enforcement officials across the country about the supposed menace of “antifa” ― a loose and hard-to-define confederation of often anonymous leftists who sometimes confront white supremacists and other far-right groups in the streets.

As thousands of historic uprisings against police brutality have swept the nation this summer (a vast majority of them nonviolent), cops have dubiously tried to tie protesters to “antifa” in an effort to cast them as extreme. President Donald Trump has also referred to anti-fascist activists as “terrorists.”

In this atmosphere, law enforcement has grown increasingly aggressive against protesters.

Logan’s story of his arrest bears striking similarities to the shocking arrests of protesters in Portland, Oregon, and New York, where videos showed armed officers abducting demonstrators off the street and tossing them into unmarked vans.

Logan, like many other protesters this summer, also claims that federal agents attempted to interview him in jail.

While in his cell, he said, he was approached by someone from the sheriff’s office who told him there were two federal agents there who wanted to talk to him.

“Maybe just talk to them,” the man from the sheriff’s office said, according to Logan. “They might have something good for you.”

It was at that moment, Logan says, he suspected his arrest was part of a ploy to get him to give up information about his fellow protesters.

So he refused to speak with them.

The sheriff’s office confirmed that federal agents were at the jail. “It is my understanding agents requested to speak with Mr. Logan the following day, but he declined,” Gregory told HuffPost.

In a statement this week, the Spokane chapter of the DSA called on the Spokane city government to investigate Logan’s arrest and detention.

“We are deeply concerned that the proliferation of unaccountable, non-transparent policing and police-like activity mirrors historical patterns of authoritarianism,” the group’s statement says. “It could also open the door for vigilante, neo-fascist militias to impersonate plainclothes law enforcement and abduct people of political or demographic identities against whom they advocate committing violence.”

Such far-right groups, DSA’s statement noted, are active in Spokane, “where white militias have walked our streets open carrying after peaceful protests.”

In his statement to HuffPost, Knezovich said it is a “great honor to represent a political party.”

“Mr. Logan has chosen to represent his in a negative light by not taking care of his criminal obligations,” Knezovich said, “and then chose to bring more shame by lying about the facts of what occurred during his arrest and using the just cause of equality to do it.”

But Logan said nothing will get in between him and his fellow activists.

“I’m not going to let them sow distrust between me and my comrades,” he said.