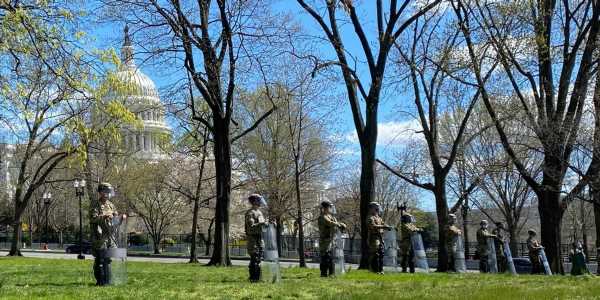 The National Guard deployed an immediate reaction force to the US Capitol Friday afternoon after someone rammed a police checkpoint.

The IRF consisted of soldiers and airmen ready to support Capitol Police, the Guard said in a statement, adding that “due to operational security, we cannot discuss further details regarding the IRF.”

Guard troops are lined up around the perimeter of the Capitol and are wearing face shields to protect from COVID and carrying riot shields. Some appear to have sidearms; however, most wield batons in addition to the shields.

The suspect, who is said to have gotten out of the car with a knife, was shot and has died. One Capitol police officer was died of injuries sustained during the attack and another is hospitalized.

Multiple videos captured National Guard troops responding to the incident at the Capitol.

As the National Guard said in its statement, there are more than 2,300 Guard members in Washington, DC supporting local, state, and federal authorities.

The National Guard presence is significantly smaller than the more than 25,000 Guard members that were deployed to the nation’s capital following the Jan. 6 riot at the Capitol complex and heightened security surrounding President Joe Biden’s inauguration.

There have been allegations that the Pentagon dragged its feet with the National Guard response to the riot, delaying a necessary call to action by 3 hours.

While the Guard presence has diminished since January, it remains elevated due to persistent security concerns.