WASHINGTON ― President Donald Trump’s impeachment defense team wrapped up its opening arguments in the Senate impeachment trial by pleading with senators to try to understand the president’s feelings.

“Put yourself in the shoes of the president,” attorney Jay Sekulow said. “The president of the United States, before he was the president, was under an investigation.”

Trump’s 2016 campaign was under FBI investigation, and then the president wound up being investigated by special counsel Robert Mueller, Sekulow argued.

Democrats allege that the president corrupted U.S. foreign policy for his own personal benefit, ignoring the advice of American diplomats, the law and the U.S. national interest. Their abuse of power charge says the president withheld military aid from Ukraine in order to coerce the country into announcing phony investigations ― one into former Vice President Joe Biden, the president’s highest-polling possible Democratic opponent for 2020, and another into whether Ukraine, and not Russia, was really responsible for interfering in the 2016 election.

“Put yourself in his shoes” has been a recurring theme of the president’s defense, with Sekulow and others repeatedly highlighting reasons the president had to be upset. They argued that Trump didn’t do what he allegedly did, but they also implied that he couldn’t help himself because he was frustrated.

“You can’t view this case in a vacuum,” Sekulow said.

Trump has openly admitted that he wanted Ukrainian President Volodymyr Zelensky to announce “a major investigation into the Bidens.” Trump’s defense has characterized it as a general investigation of corruption that just happened to involve the Bidens.

By recounting the president’s complaints about the intelligence community, his attorneys are suggesting he had good reason to go around the State Department and use his personal attorney, Rudy Giuliani, as his agent in Ukraine. The former acting ambassador to Ukraine testified that Trump used Giuliani to create a “highly irregular” diplomatic channel to Ukraine.

On Monday, Trump attorney Pam Bondi urged senators to consider why the president would want Ukraine to investigate Biden and his son Hunter. Bondi listed various instances of newspapers publishing stories about Hunter Biden’s questionable seat on the board of a notoriously corrupt Ukrainian energy company ― but she did not herself say that the Bidens had committed a crime.

“All we are saying is that there was a basis to talk about this, to raise this issue, and that is enough,” she said. 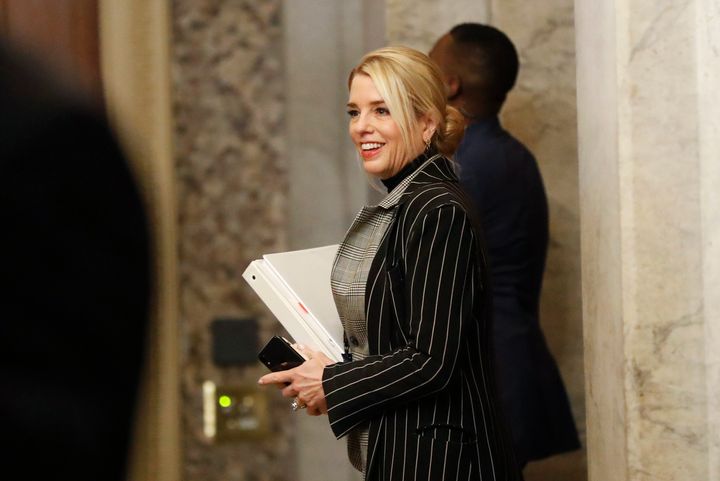 The biggest question about what happens next with the Senate trial is whether enough Republicans will join with Democrats in a coming vote on whether to subpoena witnesses ― with former national security adviser John Bolton’s name at the top of the list. Bolton has reportedly written a book manuscript that essentially confirms Democrats’ allegation that the president abused his power by withholding aid from Ukraine.

A vote could happen as early as Friday, after senators have had two days to question the House impeachment managers and Trump’s defense team.

Following Tuesday’s trial proceedings, Republican senators met behind closed doors to discuss the path forward. Members exiting the meeting, which ran over an hour, were unusually tight-lipped, but Sen. John Cornyn (R-Texas) told reporters afterward that “no final decision” on witnesses had been made.

In a legal analysis presented for Trump’s defense on Monday evening, criminal defense attorney Alan Dershowitz argued that “nothing in the Bolton revelations, even if true, would rise to the level of an abusive power or an impeachable offense.”

Sekulow ran with that argument on Tuesday morning, citing Dershowitz.

“You cannot turn conduct that is not impeachable into impeachable conduct simply by using words like ‘quid pro quo’ and ‘personal benefit,’” he said. Several Senate Republicans have said they agreed.

“There’s this subtext here, which is essentially the president’s defense team saying: Yes, he’s guilty, and we have to fall back on the fallback of all time, which is, ‘So what?’”