The Senate Judiciary Committee hearing Monday was intended to be about Judge Amy Coney Barret's nomination to the Supreme Court, but much of the focus – especially from Democrats – was not on the nominee but on the person who nominated her: President Trump.

Harris is the Democratic vice-presidential candidate running to oust Trump from the Oval Office.

Harris added: "This administration, with the support of Senate Republicans, will be in front of the Supreme Court on November 10th to argue that the entire Affordable Care Act should be struck down." "This whole thing, just like Trump, is an irresponsible botch," Sen. Sheldon Whitehouse, D-R.I., said during the hearing.

"I'm not suggesting you made some secret deal with President Trump, but I believe the reason you were chosen is precisely because your judicial philosophy, as repeatedly stated, could lead to the outcomes President Trump has sought," Sen. Chris Coons, D-Del., told Barrett. "I think that has dramatic and potentially very harmful consequences with regards to the election, the Affordable Care Act and long-settled rights."

Sen. Maize Hirono, D-Hawaii, emphasized Trump's handling of the coronavirus pandemic and mentioned that the White House "has become a COVID-19 hot spot" and that the event at which Trump announced Barrett's nomination has been called a "super-spreader."

"Why does President Trump matter?" asked Sen. Amy Klobuchar, D-Minn. "He is putting the Supreme Court in place, in his words, to quote, look at the ballots."

Klobuchar slammed Republicans for advancing the nomination so close to a presidential election before saying, "This isn't Donald Trump's country. It's yours. This shouldn't be Donald Trump's judge. It should be yours."

"Your participation… in any case involving Donald Trump's election would immediately do explosive, enduring harm to the court's legitimacy and to your own credibility. You must recuse yourself," Sen. Richard Blumenthal, D- Conn., said Monday.

The focus on the president comes as Democrats are going out of their way to avoid personally criticizing Barrett as they did for Justice Brett Kavanaugh, after whose confirmation Democrats lost seats in the Senate. Democrats are also avoiding making the kinds of comments about Barrett's Catholicism as they did in her 2017 7th Circuit confirmation hearing. Sen. Dianne Feinstein, D-Calif., then told Barrett "the dogma lives loudly within you, and that's of concern."

Sen. Dick Durbin, D-Ill., at the time asked Barrett whether she considers herself an orthodox Catholic.

On Monday, however, Durbin slammed the president, aiming to connect Barrett's nomination to his policy goals.

"On Sept. 27 President Trump tweeted he wants to see the Affordable Care Act, quote, terminated in the Supreme Court," Durbin said. "Let's be very honest about this. This president has never suffered an unuttered thought. He gives us 25 tweets a day to tell us what's going through that fertile mind… He made it clear that he wants his Supreme Court and this nominee to join him in eliminating the Affordable Care Act. This is his litmus test." 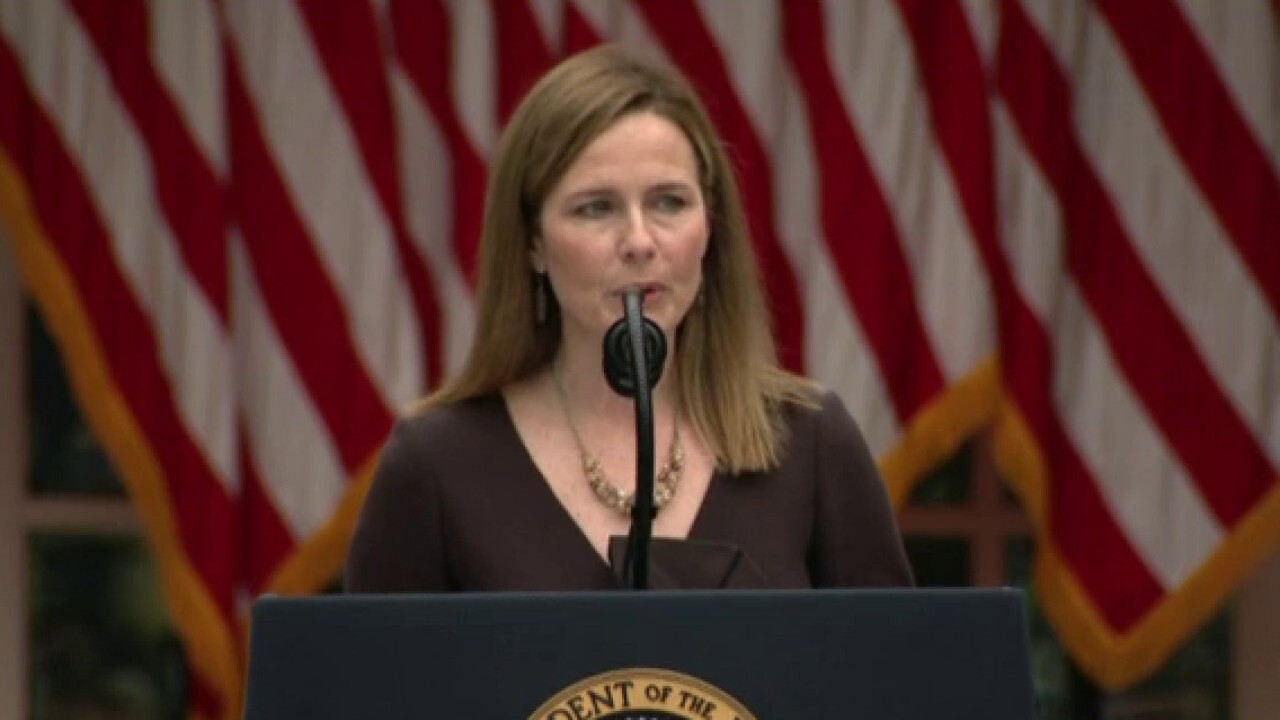 Republicans during the hearing pushed back on Democrats' attempts to pin Barrett down on how she would rule in California v. Texas, a constitutional challenge to the Affordable Care Act (ACA) that will be heard on Nov. 10, just about two weeks after Barrett is likely to be seated.

"These tactics of creating fear and uncertainty and doubt … astound me they dismay me and they disappoint me," Sen. Mike Lee, R-Utah, said of Democrats' dire ACA warnings. "They reflect the fact that we have allowed for the politicization of the one branch of the federal government that is not political."

Lee added: "I will object anytime anyone tries to attribute to you a policy position and hold you to that. You're not a policymaker. You're a judge."

Sen. Mike Crapo, R-Idaho, said of Democratic arguments against Barrett include that, "she's going to be an activist … justice and go in there and change the law. She's not. and we all know that. This is simply the tired and worn-out argument that is made every time a Republican president nominates a candidate… for the Supreme Court of the United States. And it's never been true and it will not be true with Judge Barrett." "A good judge understands it's not the court's place to rewrite the law as it sees fit. It's not his or her place to let policy, personal or moral principles dictate the outcome of a case," Sen. Chuck Grassley, R-Iowa, said. "We are fortunate Judge Barrett's record very clearly reflects this standard. She said, quote, a judge must apply the law as written. Judges are not policymakers, and they must be resolute in setting aside any policy views that they hold in the vote."

Notably, many legal observers think the California v. Texas case is more nuanced than Democrats are making it. They note that Congress' action since the ACA was passed making the individual mandate, which is the element of the law the red states behind the suit say is unconstitutional, less central to the ACA. They believe that made the mandate "severable," meaning that the court would strike down just the individual mandate and let the rest of the ACA stand.

The Barrett hearings are also happening as questions continue to surround Democratic presidential nominee Joe Biden and his Harris over whether they will pack the Supreme Court if elected. The pair has steadfastly refused to tell Americans what they will do on the issue. Multiple Senate Democrats have advocated for court packing, which means adding seats to the Supreme Court by law and confirming justices to those seats that agree with your party politically.

"Lately the left is threatening to pack the Supreme Court in retaliation for this confirmation process," Grassley said in his Monday opening statement. "Even the Democrats' nominee for president and vice president have not ruled out such blatantly partisan policy grabs. Republicans are following the Constitution and the precedent, it seems Democrats would rather just ignore both." Democrats have disputed that Republicans are following precedent, saying that they are busting precedent they set in 2016 when they refused to confirm Judge Merrick Garland to the seat opened by late Justice Antonin Scalia for many months before that year's presidential election. Senate Minority Leader Chuck Schumer, D-N.Y., has called the process "illegitimate" for that reason.

But Republicans note that in most cases where the Senate is controlled by the same party as the president, election-year Supreme Court nominees are confirmed, whereas they are generally not confirmed when the Senate is controlled by a party different from the president. Nevertheless, there has never been a Supreme Court justice confirmed this close to an election, something committee Chairman Linsdey Graham, R-S.C., acknowledged in his opening statement.

The Monday hearing is also happening in the age of the coronavirus, with the senators socially distanced in the hearing room and some beaming in via the internet. The nominee herself is wearing a black face mask that contrasts with her pink dress and would obscure any facial expression she might make in response to a senator's opening statement.

Some of the senators who are appearing remotely have had their phones ding with text messages while they are giving their statements. The first approximately 30 seconds of Harris' opening statement was plagued with poor audio and grating feedback. And Graham was forced to forego the introduction of Barrett by Notre Dame Prof. Patricia O'Hara, who the senator was unable to get on the video-conerencing line. 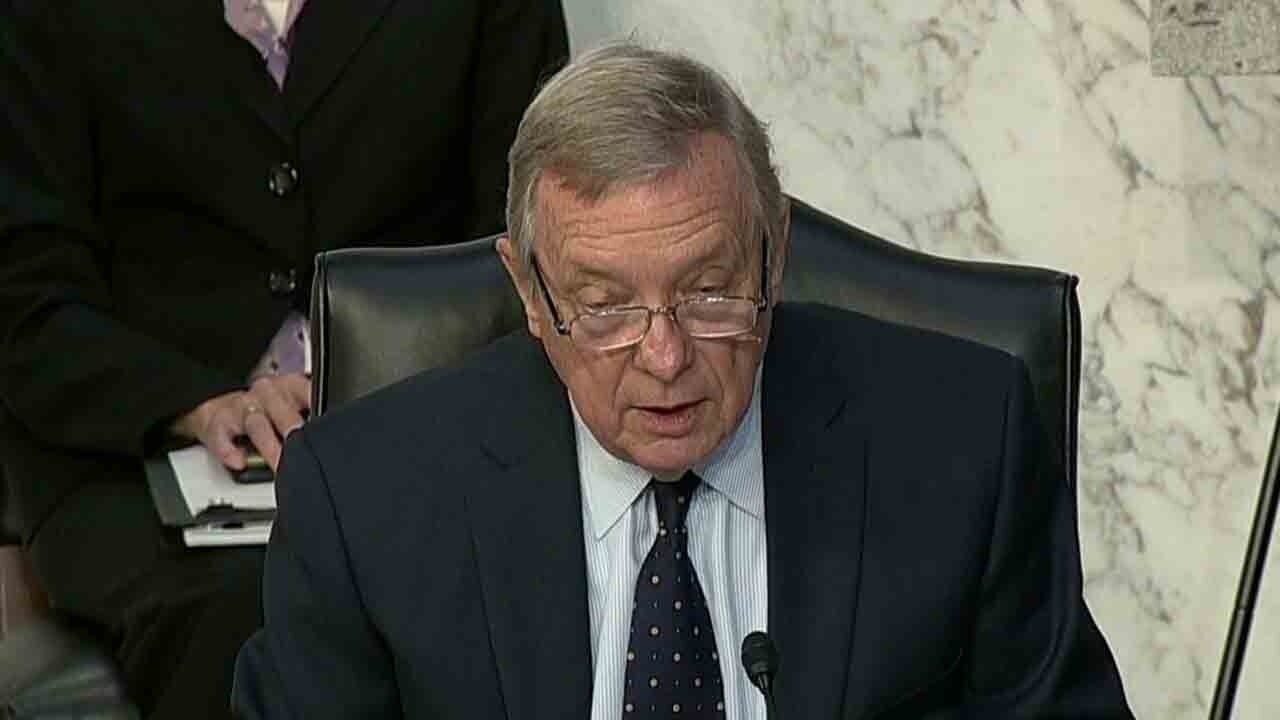 And admission into the hearing room is strictly controlled to prevent coronavirus spread. There have been a couple dozen arrests outside of the building in which the hearing is being held of people trying to get in.

Through the first hearing break, whether because of how the coronavirus protocols forced the committee to operate or because Democrats are trying a different approach for how to handle a Supreme Court nomination, the proceedings have been passionate, but still civil and organized.

"This is going to be a long contentious week," Graham said in his opening statement. "Let's make it respectful, let's make it challenging, let's remember the world is watching."

"I believe we want this to be a very good hearing," Feinstein said in response, saying that she would do her best to make the hearing civil, as Graham asked.

A particularly civil moment happened between Graham and Hirono at the end of Hirono's opening statement. She noted the "care and compassion" her Republicans showed her during her cancer diagnosis as she made a point that Barrett may overturn the ACA.

"Thank you Sen. Hirono, I think it's not just me, I think everybody on this committee and everybody that knows you knows you're passionate about your causes," Graham responded. "We have a lot of political differences but all of us are very encouraged to hear that you're doing well and we'll keep praying for you. You're an asset to the Senate."

Hirono responded: "I appreciate that, thank you, do the right thing … Aloha." But even if the hearing Monday is more orderly than those for Kavanaugh, Democrats aren't pulling any punches when it comes to the president.

She added: "We have a president who divides our country each and every day. He has called our military suckers and losers, He refused to condemn white supremacists. And he had the call to hold up a Bible as a prop in front of a church instead of heading its words to act justly."