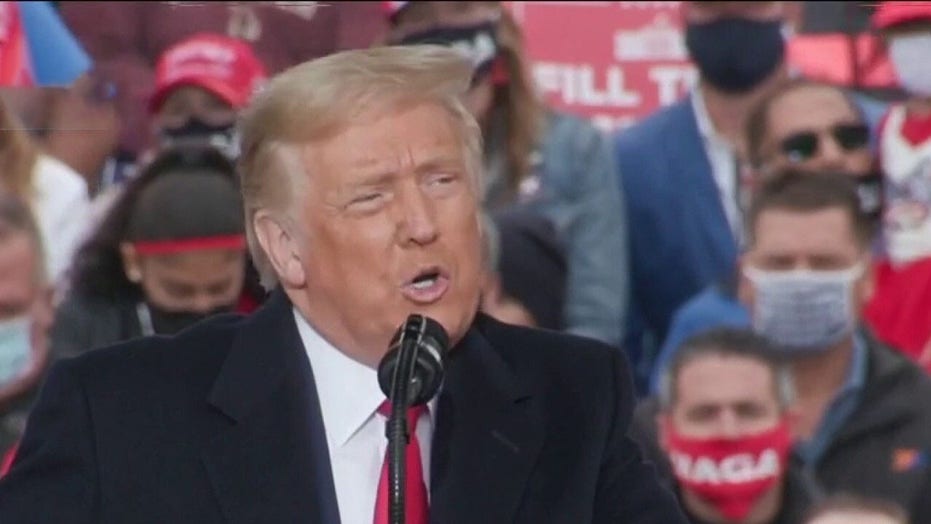 President Trump criticizes Biden’s pledge to phase out the oil industry during a rally in Allentown, Pa.

President Trump warned Pennsylvania residents that a Joe Biden administration would sink their state's economy, while mocking his Democratic rival for what he called a "shocking admission" about his energy policy.

Biden said that he would "transition from the oil industry" after Trump had pressed him on the subject.

"Last week, Sleepy Joe Biden made perhaps the most shocking admission ever uttered in the history of presidential debates," Trump told a crowd at a rally in Allentown. "In other words, he blew it."

Trump went on to say that the Democratic nominee "confirmed his plan to abolish the entire U.S. oil industry," which the president said "That means no fracking, no jobs, no energy for Pennsylvania families."

The president accused Biden of supporting ideas that would lead Pennsylvania to financial ruin.

“He will eradicate your energy and send Pennsylvania into a crippling depression," he said.

Over the weekend, Biden faced questions from multiple local Pennsylvania news outlets over his debate comments, as well as his mixed messages regarding fracking. He claimed that the transition away from oil was already the trend, having nothing to do with his policy proposals. Biden did say he would put an end to existing subsidies and tax breaks for oil companies.

Talking to WBRE, Biden insisted that he "will not ban fracking," repeating his claim that he only supports banning new fracking on federal lands.

During the debate, Trump accused him of changing his stance on fracking over the course of his campaign. Biden denied it and dared Trump to post video of him saying something different.

That night, Trump's campaign shared a montage of clips. They included Biden being asked during a primary debate if there would be any place for coal, fracking or any fossil fuels if he becomes president.

"No. We would work it out. We would make sure it's eliminated," Biden said.