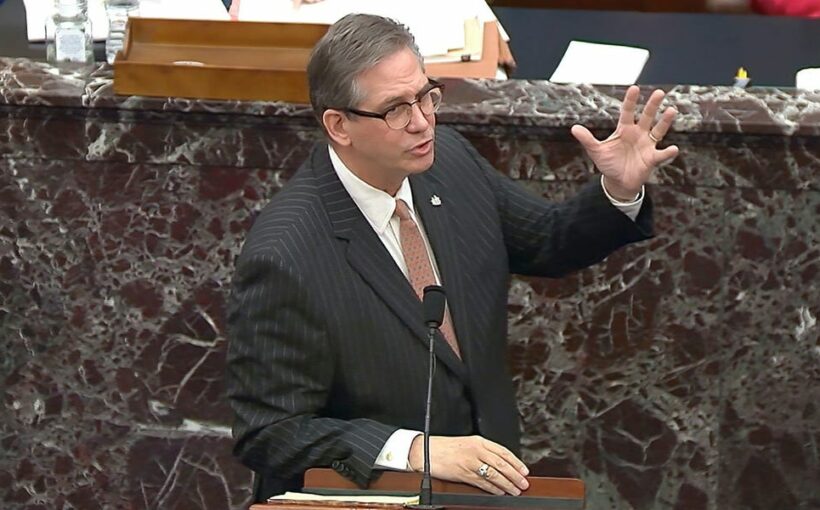 Bruce Castor, one of former President Donald Trump’s impeachment defense attorneys, claimed on Friday that the events of January 6 did not amount to an “insurrection,” despite widespread agreement, including among Republicans, to the contrary.

“Clearly, there was no insurrection,” Castor said. “Insurrection is a term of art. Defined in the law, it involves taking over a country, a shadow government, taking the TV stations over and having some plan of what you’re going to do when you finally take power. Clearly this is not that. What our colleagues here across the aisle meant was incitement to violence, to riot.”

The events of January 6 are widely believed to meet the definition of an insurrection, which is a revolt against civil authority or an established government. Castor attempted minimize the Democrats’ charge that Trump incited an insurrection at the Capitol by claiming his loyalists’ actions amounted only to “violence” or “a riot,” rather than a pre-meditated effort to disrupt Congress’ certification of the election and overturn the results.

At another point in his argument, Castor argued that the Capitol riot was allegedly pre-planned, at least in part, and therefore not incited by the president’s January 6 speech.

Many mainstream media outlets have described the events as an insurrection. The Associated Press’s vice president and editor at large for standards, John Daniszewski, told the publication’s reporters that “mob,” “riot,” and “insurrection” were all accurate descriptions of the events.

Republican leaders, including Senate Minority Leader Mitch McConnell, have also used the term. On the night of Jan. 6, McConnell called it a “failed insurrection.”

Five people died during the Capitol siege, at least 138 police officers were injured, and more than 250 people have been charged with crimes in connection to the insurrection. Federal investigators say they have evidence that some of the rioters planned their attacks ahead of time. The FBI and the Justice Department are investigating “significant felony cases tied to sedition and conspiracy.”

In videos, online posts, and public statements leading up to the siege and in the weeks since, Trump supporters said they were acting on his orders to stop Congress from ratifying President Joe Biden’s victory in the 2020 election. Biden was lawfully elected president. Despite Trump and his allies’ lies about voter fraud and election malfeasance, the 2020 election was the most secure in US history.