Home » Politics » Tucker Carlson says his interview with Rep. Matt Gaetz about the DOJ's investigation into the lawmaker was 'one of the weirdest interviews I've ever conducted' 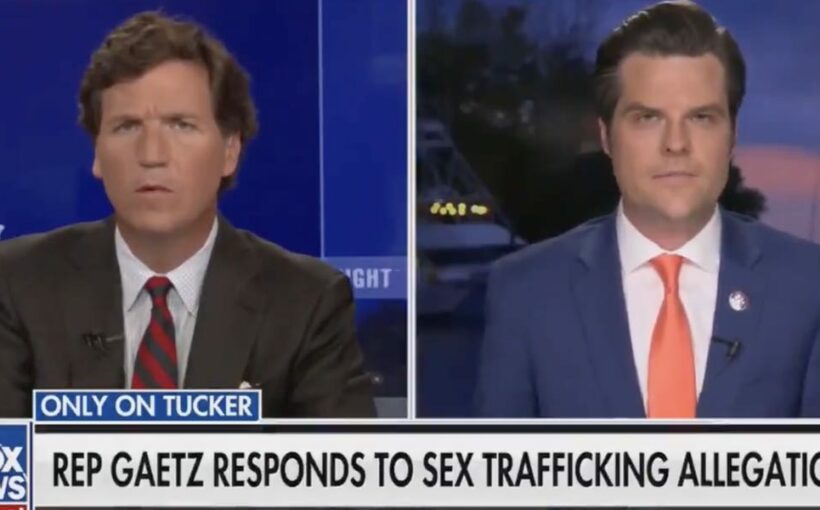 Carlson struggled to make sense of his discussion with Gaetz, saying afterward, “You just saw our Matt Gaetz interview, that was one of the weirdest interviews I’ve ever conducted.”

“That story just appeared in the news a couple of hours ago and on the certainty that there’s always more than you read in the newspaper, we immediately called Matt Gaetz and asked him to come on and tell us more, which as you saw, he did,” Carlson added. “I don’t think that clarified much, but it certainly showed this is a deeply interesting story and we’ll be following it. Don’t quite understand it. But we’ll bring you more when we find out.”

The New York Times first reported on the DOJ’s investigation, and Gaetz confirmed its existence to The Times and the news website Axios. In a series of tweets, Gaetz claimed the investigation was part of an “organized criminal extortion” scheme against him by a former DOJ employee, and he called The Times story “a planted leak.”

It’s unclear if March 16 was the first time Gaetz or his family members were contacted as part of the alleged scheme. But if it was, that would make it unlikely that the DOJ’s inquiry was launched as part of the scheme, because the department’s sex-trafficking probe was launched late last summer and had been well underway by March 16. Insider contacted Gaetz’s spokesperson for clarification on the timeline but did not immediately get a response.

The Times reported that the DOJ’s inquiry into Gaetz is focusing on two encounters he allegedly had with the 17-year-old in 2019.

During his appearance on Carlson’s show, Gaetz said the FBI had “threatened” a “friend” he brought to dinner with Carlson and his wife two years ago.

“I can say that actually, you and I went to dinner about two years ago, your wife was there and I brought a friend of mine, you’ll remember her, and she was actually threatened by the FBI, told that if she wouldn’t cop to the fact that somehow, I was involved in some pay-for-play scheme, that she could face trouble,” Gaetz said.

He continued: “And so, I do believe that there are people at the Department of Justice who are trying to smear me. Providing for flights and hotel rooms for people that you’re dating who are of legal age is not a crime, and I’m just troubled that the lack of any sort of legitimate investigation into me would then permute, would then convert into this extortion attempt.”

Carlson replied: “I don’t remember the woman you’re speaking of or the context at all, honestly.”