London: Former Malaysian prime minister Mahathir Mohamad has stoked anger in Europe for saying Muslims "have a right to kill millions of French people" just hours after a terrorist beheaded an elderly worshipper and stabbed two others to death inside a Nice cathedral.

The outburst earned a rebuke from Australia's former ambassador to France, Brendan Berne, who said the ex-Malaysian leader was a "pious hypocrite".

"As Australians, we know very well that this is a man who likes to provoke," Berne said. "He is a bigot without principles, except those of attacking the Western world." 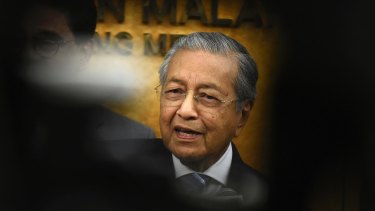 The comment by former Malaysian prime minister Mahathir Mohamad was removed by Twitter after it was found to glorify violence.Credit:AP

In a series of tweets about two hours after two women and a man were killed in the Notre-Dame Basilica in Nice, the 95-year-old told his 1.3 million followers that "angry people kill" irrespective of their religion.

"The French in the course of their history have killed millions of people. Many were Muslims," he said.

"Muslims have a right to be angry and to kill millions of French people for the massacres of the past."

Twitter initially determined that the comment violated its rules against glorifying violence but allowed the tweet to stay up because it "may" be in the public interest. The social media giant later removed the tweet entirely.

"The account must be immediately suspended. If not, Twitter would be an accomplice to a formal call for murder," O said.

In other tweets, said Muslims "have a right to punish the French" but had "by and large" not taken an "eye-for-an-eye" approach.

He also claimed Macron was "primitive" for "blaming" Islam and Muslims for the October 16 murder of Samuel Paty, a school teacher who was decapitated for showing cartoons that were offensive to Muslimsduring lessons about free speech.

Macron did not blame Islam or Muslims for the teacher's beheading but has recently stepped up his condemnation of Islamic extremism in France.

Some 263 people have died in terror attacks in the country since the assault of the office of satirical magazine Charlie Hebdo in 2015.

The French President's plan to tackle the problem has been criticised by Turkish President Recep Tayyip Erdoğan and Pakistani Prime Minister Imran Khan, who have accused the French President of demonising Muslims and endorsed a boycott of French goods.

The former Malaysian leader said the boycott did not go far enough because it "cannot compensate the wrongs committed by the French all these years".

Of that claim, Berne responded: "Believe me, he loves buying luxury goods from LVMH in Paris. He's a pious hypocrite." 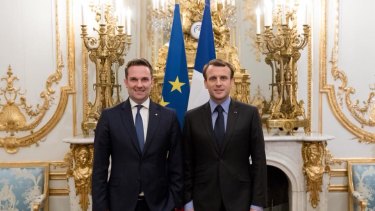 Berne said he felt compelled to publicly criticise the former Malaysian leader because the French do not know his history like Australians do.

"Despite being a statesman of a Muslim country, he does not speak for all Muslims nor all Malaysians who love France," said Berne, who also tweeted some of his comments in French for citizens to read.

"The average French person would be horrified and confused by his statement. They need context."

Former prime minister Malcolm Turnbull, who worked closely with Macron on countering extremism and considers him a friend, last week called the French President "one of the great leaders of our times".

Turnbull endorsed Macron's approach as a good balance between dealing with a problem but not demonising all Muslims.