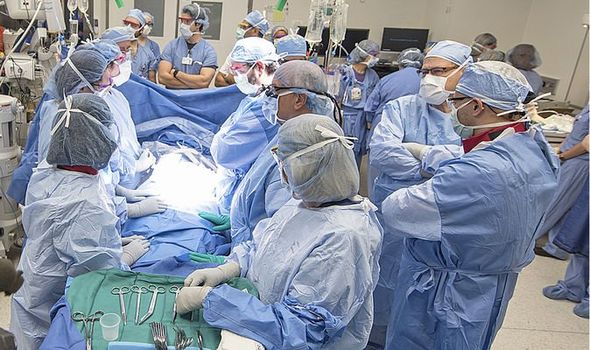 The pioneering transplant birth has brought hope to thousands of women who are unable to conceive because of uterus problems.

The delivery in the US city of Cleveland, Ohio, was the first of its kind in North America and only the second anywhere in the world.

Both the baby and mother, neither of whom have been named, were said to be “doing great” following the caesarean birth at the Cleveland Clinic last month.

“Everything went wonderfully with the delivery and the mother and baby girl are doing great.

“It’s important to remember this is still research. The field of uterus transplantation is rapidly evolving, and it’s exciting to see what the options may be for women in the future.”

Doctors transplanted the womb into the mother in late 2017 and about a year later she became pregnant through in vitro fertilisation (IVF).

The clinic’s transplant surgeon Dr Andreas Tzakis said: “It was amazing how perfectly normal this delivery was, considering how extraordinary the occasion.

“Through this research, we aim to make these extraordinary events ordinary for the women who choose this option.

“We are grateful to the donor. Their generosity allowed our patient’s dream to come true.”

The mother, who is in her mid-30s, was born without a uterus and entered a trial conducted by the clinic for women with uterine infertility.

Transplant team member Dr Tommaso Falcone said of the work: “This was always a question mark that required research.

“But it goes to the idea that a deceased donor can give her uterus and it will function amazingly.”

The clinic has so far transplanted five uteruses, three of which were successful and two of which needed hysterectomies to remove them.

More than a dozen women have had babies with wombs donated from living donors such as friends or relatives.