Huw dare you! BBC newsreader Huw Edwards shocks fans by NOT striking his signature hand-on-desk pose at start of the news ‘for a dare’

BBC newsreader Huw Edwards has shocked fans across the nation after he refrained from striking his signature hand-on-desk pose at the start of the News at Ten last night.

The pose, which is made by the newsreader at the start of almost every BBC News at Ten he presents, has attracted a following online, with a fan account Huws At Ten posting regular photos of the stance.

But viewers were shocked to see Mr Edwards, 59, sitting with his hands clasped on Tuesday night, instead of palms down on the desk with one arm extended out, as he is known for. 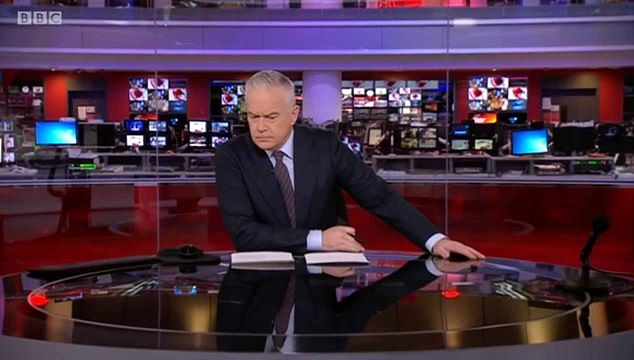 Signature stance: Here newsreader Huw Edwards is seen doing the pose he has become known for whilst presenting BBC News At Ten

Taking to Twitter to share an explanation for his unusual body language Mr Edwards said he had been ‘dared’ to sit with his hands together.

He wrote: ‘It was a dare. A shattering experience. I need a drink.’

Fan account, Huw at Ten, simply shared a screen grab of Mr Edwards making the out of character pose with the caption: ‘!???!???????!? [Shocked emoji]’ 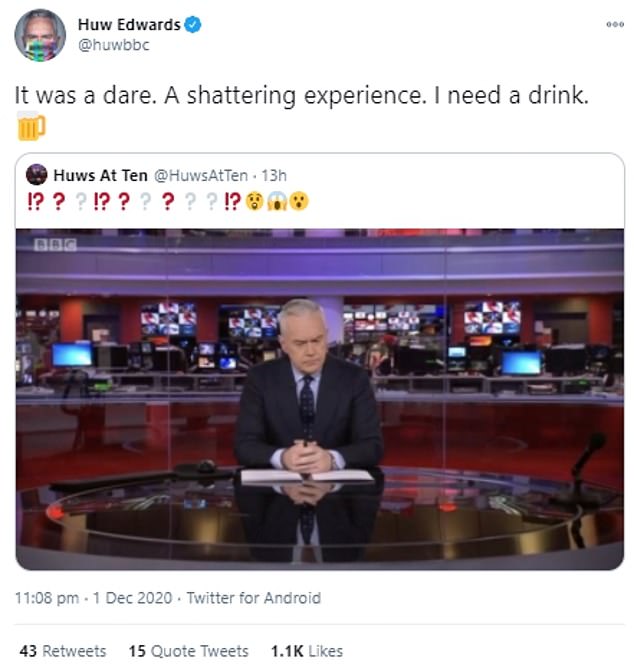 Mr Edwards responded to the shock caused by his change of pose tweeting: ‘It was a dare. A shattering experience. I need a drink.’

Viewer Douglas Cramphorn tweeted daring Ant and Dec to take up the pose: ‘Hi @antanddec – last night the Welsh legend that is Huw Edwards broke the Internet by NOT starting the news in his customary pose (as a dare, allegedly) – so….I dare you boys to adopt the pose in tonight’s show..go on…dare ya!’

The newsreader has attracted the attention of thousands on Twitter and TikTok in recent weeks after David Kifford, a Senior Technical Operator at BBC News, shared a video of a number of presenters, producers and crew ‘doing the Huw’.