Living with a partner from Britain comes with extra angst of late, and not just because of Australia retaining the Ashes. As Britain lurches towards a no-deal Brexit on October 31, my husband is gripped by questions of what the future will hold for his country of birth. Despite considering myself an eternally sympathetic spouse, my mind turns to what such a diabolical outcome for Britain will mean for Australia. 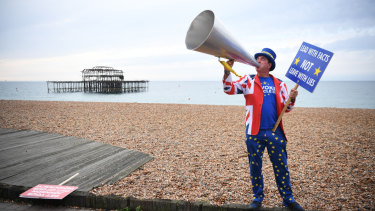 Anti-Brexit protester Steve Bray on a beach at Brighton, where the Labour conference is debating the party’s stance on Brexit.Credit:Getty Images

Does a no-deal Brexit represent a threat to our already meek economy and will it push us into recession? Or will it simply make the next sojourn to Europe and Britain a little more affordable?

Our top economic policymakers have in the past concluded that there is little risk to the Australian economy from Brexit. But this has assumed that there would be a deal between Britain and Europe in place, and the prospect of a no-deal scenario, especially one which has not been planned, requires fresh consideration.

The OECD released a report last week predicting that a no-deal Brexit will reduce the size of Britain’s economy by 3 per cent, and Europe’s by 0.6 per cent over the next three years. On this reading, while Britain is heading for a recession Australia doesn’t have a lot to worry about.

While the OECD is optimistic, there are reasons to think that the economic impact on Europe, and therefore Australia, may be greater than estimated. Concerns have been raised that a no-deal Brexit may be enough to tip Europe into recession.

The immediate economic impact from a no-deal Brexit on Europe has two main sources: supply chains and confidence.

A no-deal Brexit would mean the re-establishment of border checkpoints between Europe and Britain. It would be an abrupt end to the free flow of goods that has existed between Britain and most of Europe since 1973. We can expect our social media feeds to be filled with pictures of trucks stretching hundreds of kilometres; however, it is what is on those trucks that is of greater concern.

Open borders between Britain and Europe have meant that complex supply chains have developed and so roughly half the trade between them is actually goods that are needed to make other goods.

While Europe may find going without British whisky an inconvenience, going without or having to wait longer for goods it needs to produce other goods is a much bigger threat to Europe’s economy. Europe’s capacity to withstand this shock is going to depend on individual businesses' game plan for a no-deal Brexit. If they are ready, then the OECD’s confidence may be warranted. But if they are not, then it may well be underestimating the impact on Europe’s economy.

Confidence is the magic that all economies need. Without optimism that today will be better than yesterday, people stop spending, stop investing and economies stop growing. The pictures of trucks queuing for kilometres, chaos at airports and reports of food or medicine shortages will undermine confidence across Europe. This is already starting with warnings that Ireland will face food shortages under a no-deal Brexit scenario.

Given that the German economy has already recorded one-quarter of negative growth and Italy is facing yet another round of political uncertainty, it will not take much to push Europe into recession. And a European recession, in particular the impact this has on a China already suffering from its trade war with the USA, may be enough to tip the Australian economy into recession for the first time in 28 years.

If such an eventuality unfolds, expect claims from the federal government that there was nothing they could do. That no one could foresee the failure in British democracy that a no-deal Brexit would represent. But good economic management would have had us much more match fit and ready to absorb such a shock.

Stephen Smith didn’t score three Test centuries during the Ashes by turning up out of shape and unprepared, he did it because he trains hard every day to be his very best when it counts. He doesn’t rest on his past successes and become complacent in his future performance. The Federal Government should follow his example, with its ongoing complacency in addressing the underlying weakness of our economy the biggest current risk to our economy.

As my husband is well aware, I do enjoy watching Britain lose at pretty much any sporting endeavour, but watching Brexit is hard, as a once-great country commits an unnecessary act of self-harm driven by a broken ideology. It will be even harder, however, to watch if it also pushes us over the precipice of a recession we do not need to have.

Angela Jackson is an economist at Equity Economics. She tweets at @EconomistAnge.