China said on Tuesday it had suspended barley imports from Australia's largest grain exporter, a ruling that threatens to inflame bilateral tensions.

China's General Administration of Customs said barley shipments from CBH Grain would be halted after pests were found on multiple occasions, the administration said on its official WeChat account. 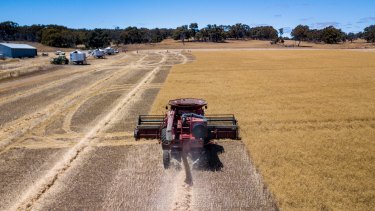 CBH has been hit by a Chinese trade ban.Credit:Hamish Hastie

CBH denied the charge as it said it would work with Australia's government to overturn the ruling.

"CBH has not found any evidence to support the claims," a spokesman for CBH told Reuters.

"CBH confirms that all grain shipments to China have met all government phytosanitary export requirements and is therefore very disappointed to hear of the suspension."

While Beijing's ruling on CBH Grain did not essentially affect trade after the imposition of more than an 80 per cent tariff on Australian barley earlier this year, it cast a shadow over Australian exports to China.

"It is a signal, showing that Australian firms will be in an unfavourable situation. People will be rather cautious when buying Australian goods now," said a China-based grains trader, who declined to be named as he was not authorised to talk to the media.

CBH – a cooperative of Western Australian farmers – is Australia's largest grain exporter, regularly selling millions of tonnes of wheat, barley and canola to Asia and the Middle East.

Australia is expected to produce about 10.6 million tonnes of barley this year, with CBH on course to handle about 30 per cent.

China had until recently bought as much as 70 per cent of Australia's barley exports. But with that market closed, Australian farmers will now be forced to look for alternative markets where growers are expected to earn about A$50 a tonne.

Already inflamed by Australia's allegations that China was meddling in its domestic affairs, relations worsened when Prime Minister Scott Morrison called for an independent inquiry into the origins of COVID-19.

China in May imposed anti-dumping and anti-subsidy duties totalling 80.5 per cent on Australian barley – effectively stopping a billion-dollar trade.

Last month, China said it would investigate whether Australian wine was being dumped into its largest buyer, a review that has since been expanded to include possible subsidies. Australia denies both allegations.