Home » World News » Coronavirus: London's R rate could be as high as 3

London’s R rate ‘is the worst in England’ and could be as high as 3: Government-run Covid-19 surveillance study claims the capital’s outbreak is doubling every 72 hours

Coronavirus is spreading fastest in London, according to a study that claims the R rate in the capital is almost as high as three and infections are doubling every three days, compared to 1.6 and nine days across England.

Research by Imperial College London, which today estimated a staggering 100,000 people are catching Covid-19 every day, found the city has a ‘scary’ rate of spread.

The paper predicted that the R rate – the average number of people each carrier infects – is higher than two in London, the South East, East and South West, which are mostly not subject to any local lockdowns.

And of those places London has the highest prevalence of the virus at 0.89 per cent, suggesting more than 80,000 of its nine million people are infected at any given moment.

And cases are doubling every three days in the city, compared to every nine days nationwide.

The city is in a Tier Two local lockdown, meaning people are banned from meeting indoors with anyone they don’t live with, except at work.

Infection rates vary across the city – from 223 positive tests per 100,000 people in Ealing to 103 per 100,000 in Lewisham – but all areas face the same rules because people travel around so much.

Scientists behind Imperial’s study came out in favour of a national lockdown, which has now been adopted in France for a second time, and said the results show that current social distancing rules aren’t doing enough; Britain, they said, should ‘think about changing the approach’. 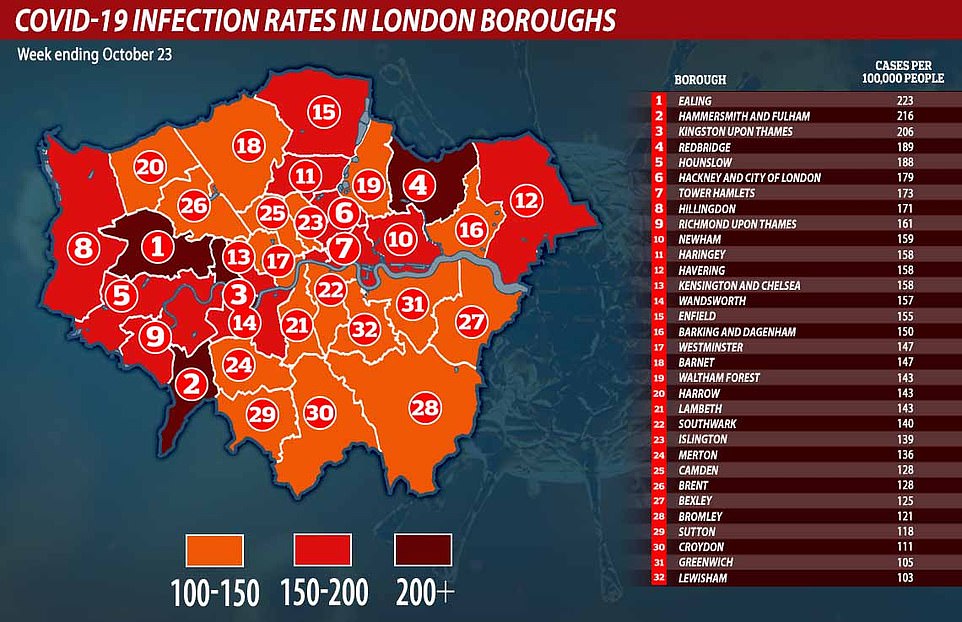 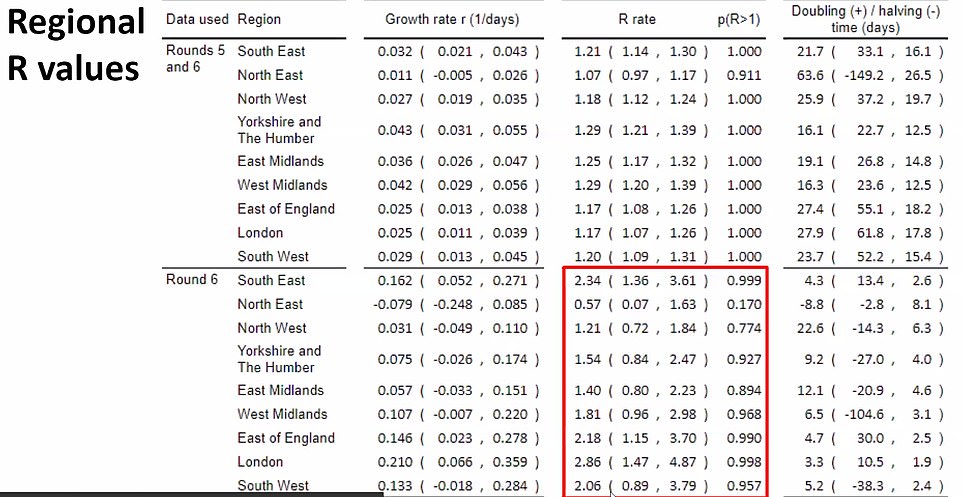 The study found that the virus’ reproduction ‘R’ rate – the average number of people each Covid-19 patient infects – was 1.6 across England in the most recent week, compared to 1.16 in the previous round. The R is thought to be hovering between 1 and 1.5 in the north and greater than two in the South East and South West. In London it’s estimated to be nearly three 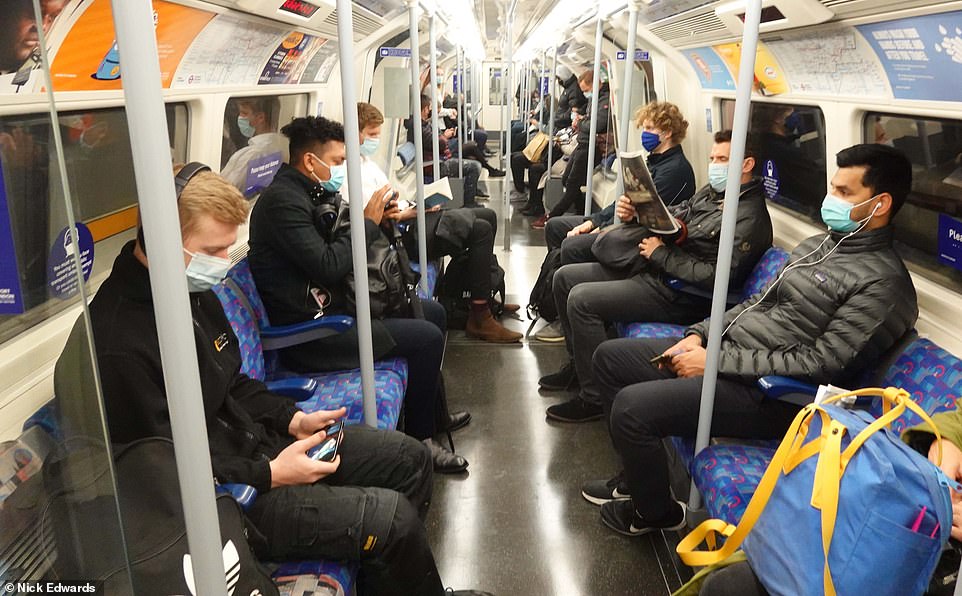 Scientists say the coronavirus spreading faster in London than anywhere else in England. The capital currently has Tier Two lockdown rules which ban people from socialising indoors

‘I think what our study shows is there would be genuine benefits to some kind of national policy,’ Professor Steven Riley, an infectious diseases expert at Imperial College told Radio 4’s Today this morning.

‘If we’re going to end up using those restrictions that have been brought in elsewhere in Europe today and yesterday… we should think about timing. And sooner is better than later for these.

HOW DO R RATES DIFFER ACROSS ENGLAND?

The REACT study by Imperial College London estimates England’s regional R rates between October 15 and 26 to be as follows:

The research was based on 85,971 swab tests done across England between October 15 and 26, of which 863 were positive. Using this information the researchers calculated around 1.28 per cent of the population is infected.

Rates of positive tests in London show some boroughs have comparable numbers of infections per person than the national average – 230 positive tests per 100,000 people – while others have fewer than half as many.

Ealing, Hammersmith and Fulham and Kingston upon Thames, all in the west of the city, have rates higher than 200 cases per 100,000 – but none have as many as England as a whole.

Croydon, Greenwich and Lewisham, in the south and east of the city, have fewer than half as many cases as the national average, however, with a per-person rate lower than 115 per 100,000.

The city was lumped under the same rules because, Mayor Sadiq Khan said, the population moves around so much that it would be too difficult to try and separate them.

Higher R rates were found across the southern regions of England, which have not faced as many local lockdowns as the Midlands and the North.

London and parts of Essex are in Tier Two restrictions but the majority of the East, South West and South East face only national social distancing rules and are allowed to socialise in groups of six.

Meanwhile, the R rates are lowest in the North West and North East, which have strict rules because their outbreaks are the worst in the country.

The North East, which includes Newcastle and Middlesbrough, is the only place in the country where the outbreak is shrinking, with an estimated R of 0.57.

In a bid to control the virus in London, which was struck by disaster in the first wave of the epidemic in the spring, the Metropolitan Police has said it is sending out extra patrols to enforce social distancing laws.

The Met has sent extra officers to the badly-hit boroughs of Hammersmith and Fulham and Hackney to conduct extra patrols in the worst-affected areas in the capital to help clamp down on breaches of regulations. 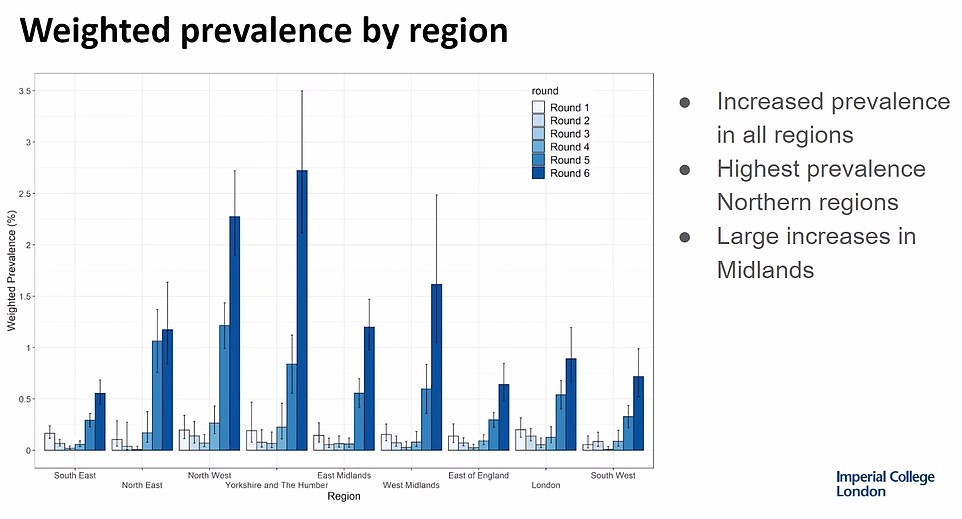 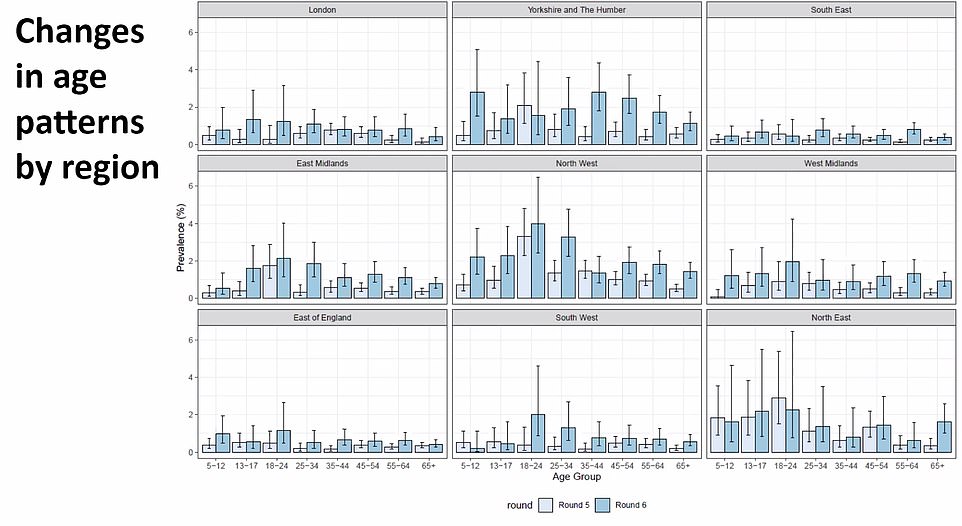 The REACT-1 study – commissioned by the Department of Health – has been swabbing tens of thousands of people since summer. The latest findings from the most recent phase (round six, in dark blue) show increases in transmission in every region of England

It comes as data released by the National Police Chief’s Council today revealed around two-thirds of coronavirus fines have been handed to those under the age of 35.

Under the new clampdown, officers will target those making the most ‘deliberate, dangerous or flagrant of breaches’ and who risk putting others lives in danger.

Also among the worst-affected areas in the capital are Ealing, Kingston Upon Thames, Redbridge, Hounslow, Hillingdon and Tower Hamlets.

Deputy Assistant Commissioner Matt Twist, the Met’s lead for Covid-19 response, said: ‘This approach does not mean that other areas of London will see a reduction in existing patrols to clamp down on rule breaking.

‘However, in those areas of London where the transmission rate is at its highest, we will be doing our part to help shut down reckless breaches of the regulations.

‘I know the vast majority of Londoners are sticking to the rules which are designed to keep everyone in our communities safe. But, there is a small minority who have a disregard for the health of our communities and it is those individuals who we will be targeting with these new patrols.

‘We have been, and continue to listen to our communities and explain to them our policing approach, and have been regularly reviewing our deployment plan according to the latest infection rates by PHE.

‘This remains under constant assessment and where we see an increase in reported cases we adapt our response to reflect that.

‘Extra patrols have, this week, been deployed to Hammersmith and Fulham and Hackney, and we will continue to monitor the reported cases to ensure we are doing all we can, working with our communities, to tackle the further spread of this disease.

‘We are now approaching the Halloween weekend; another significant date in the annual calendar for celebrating, which is going to be different this year with parties unable to go ahead as normal.

‘As much as the restrictions may seem disheartening, we want to remind people that they are in place for an important reason, to keep everyone safe.’

The REACT-1 study that produced the worrying statistics about London also estimated there were around 96,000 people getting infected every day in England by October 25.

The experts behind the research warned cases were just weeks away from surpassing levels seen during the darkest days of the pandemic in March and April. Previous projections have estimated there were slightly more than 100,000 daily cases in spring, which led to over 40,000 deaths in the first wave.

The study warned infections are doubling every nine days, suggesting there could be 200,000 daily cases by the first week of November.

Imperial researchers said it was possible that the recent wet and dreary weather had played a role in the surge in infections, by driving people indoors where the virus spreads more quickly. But they warned it was more likely a small dip in adherence to social distancing rules across the board had opened the door for the highly infectious disease to spread more rapidly.

Imperial’s best guess is that 1.3 per cent of everyone living in England was carrying the disease by October 25, the equivalent of one in 75, or 730,000 people. Covid-19 prevalence was highest in Yorkshire and The Humber (2.7 per cent) and the North West (2.3 per cent).

The study, which will likely be used to pile more pressure on No10 to impose a national lockdown, also estimated the virus’ reproduction ‘R’ rate was around 1.6 across England in the most recent week, compared to 1.16 in the previous round. Experts have repeatedly warned it is critical the reproduction rate stays below the level of one to prevent cases from spiralling.

It comes after another 310 Covid-19 victims were recorded last night and 367 the day before, in the highest daily toll since the end of May. But the 26,688 infections reported yesterday was actually the first week-on-week fall in a month — though the central testing programme is missing asymptomatic and mild cases of the virus, which make up the vast majority of infections. 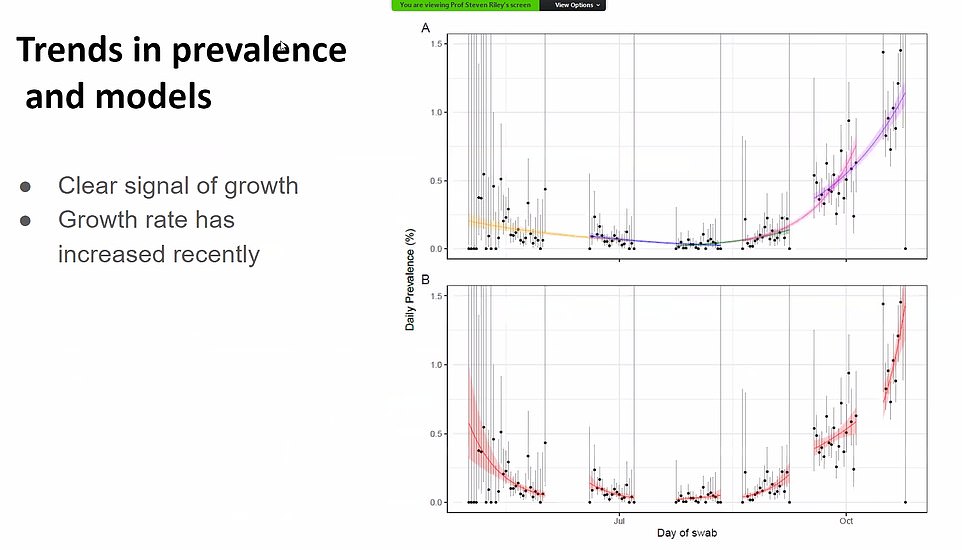 Researchers sent swabs to 85,971 volunteers in England between October 16 and October 25. In total, 863 were positive (1.28 per cent) – more than double the 0.6 per cent the week before. Pictured: How cases have surged since summer, according to findings from all six phases of the study 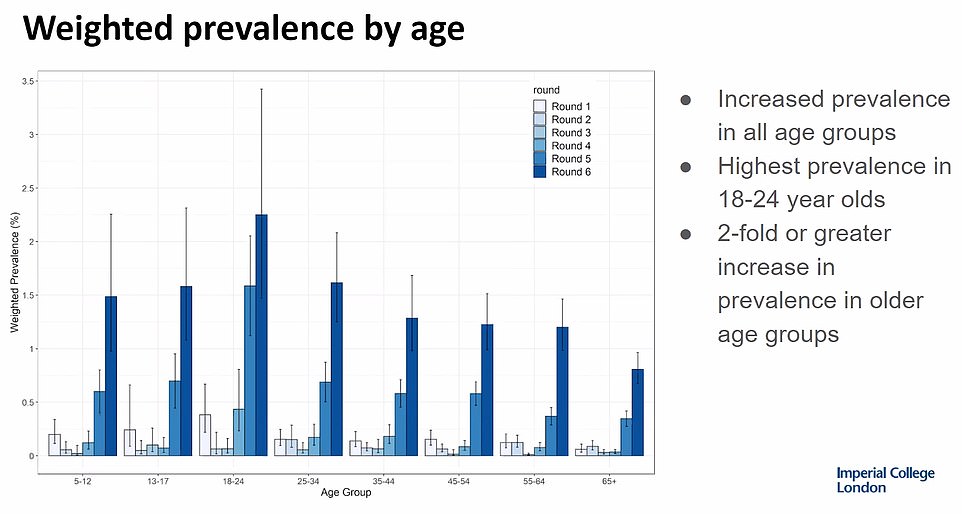