North Sydney Council has vowed to transform Kirribilli into the "jacaranda village of Sydney" as tourists once again flock to take photographs under the suburb's famous purple blooms.

Even in the face of COVID-19, hundreds have descended on to McDougall Street in recent days to take photos for social media, as the spot becomes increasingly popular with tourists and Instagram influencers.

Last year, a number of residents complained to the council over the flurry of tourists and this year is proving no different. 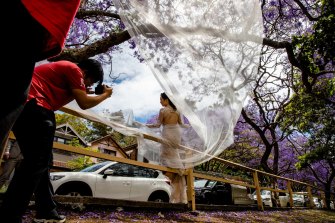 North Sydney Council is looking to capitalise on the social media trend and many more trees are to be planted in the area.Credit:Edwina Pickles

"I'm quite frankly disappointed about that," Cr Gibson said. "The jacaranda season is a happy season. I am just delighted to see visitors come to Kirribilli and come and support our local shops."

As a result of the popularity, North Sydney Council has created a blueprint to capitalise on the social media trend and tens more trees are to be planted in the area in the coming months.

Cr Gibson said jacaranda trees had recently been planted in nearby Holbrook Avenue and council was awaiting final approval to plant up to a dozen more along Broughton and Ennis roads.

"We are going to make the jacaranda the signature tree of Kirribilli," she said. "This is something joyous, something beautiful and the residents of Kirribilli should be eager to share what we have."

Due to the pandemic, the street isn't seeing busloads of international tourists like normal but it has instead seen a swarm of brides and international students this year.

Sydney couple Jimmy Kinarta, 24, and Yenny Ciady, 25, who are getting married in Indonesia next year, headed down the street on Monday for a "pre-wedding photoshoot".

"It was really busy; there were another three or four couples there when we went," Mr Kinarta said. "We saw the location from some photos on social media so we decided to go." 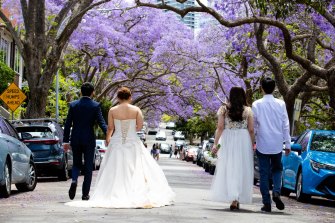 Due to the pandemic, the street isn’t seeing busloads of tourists like normal but it is instead playing host to swarms of brides and international students this year. Credit:Edwina Pickles

Kirribilli resident Jan Howlett, 80, has lived on McDougall Street for 25 years and said that while it was "rather dangerous at times" the trend didn't worry her.

Ms Howlett said police cars had been patrolling the area during recent days and that hundreds of people had been on the street from 7am on Sunday.

"I'm quite happy to see all these people because they do get a lot of joy," she said.