For Joey Scandizzo, the prospect of waiting another fortnight to reopen his business is devastating.

Mr Scandizzo employs more than 150 staff across his nine Joey Scandizzo Salon hairdressing outlets and he was one of many business owners to express dismay at the prospect that stage four restrictions could remain in place until the end of the month. 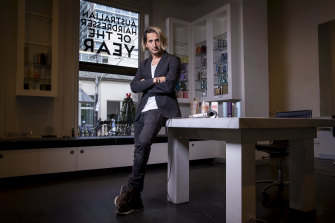 Joey Scandizzo is worried that an extension to stage four restrictions will severely damage the hairdressing industry.Credit:Wayne Taylor

Premier Daniel Andrews refused to clarify the timetable on Thursday after a draft plan was leaked suggesting little change would be made to restrictions when the government's "road map" is released on Sunday.

"I understand we are in a pandemic, but we need to work together to get through this. The possibility of an extension cannot happen, that will kill our industry," Mr Scandizzo said.

He said there was still a significant amount of financial stress on business owners even with the economic support on offer to Victorian companies.

"There's still a lot of bills including rent, insurance, accumulating annual leave, super and orders for stock that can’t be used or sold," he said.

Mr Scandizzo said his major concern was for the wellbeing of his employees.

"I think the major thing is, it's the mental health of our staff, our hairdressers are quite active, they like to talk to people and they're always constantly dealing with people," Mr Scandizzo said.

"To be locked up at home and only be allowed out for an hour is really taking a toll on a lot of our staff and their mental health."

BODA Hair Boutique founder Martha Kourtidou said her business was booked out for the next six months on the assumption she would be able to reopen her salons from September 13 under stage three restrictions.

"This will have a huge impact on our business, we can’t keep living in a world in which we don't know what's going to happen," Ms Kourtidou said.

"If the government decides to go through with this, then I think out of respect for everybody, not just business owners, we need a road plan, we need a map."

Ms Kourtidou said the lack of clarity on reopening meant her business couldn't plan for the future.

"We have no clarity at all, we don’t know how to roster our team, what our new working environment looks like, how many clients we are allowed to have, or when we can book them in," Ms Kourtidou said.

We have no clarity at all, we don’t know how to roster our team, what our new working environment looks like, how many clients we are allowed to have, or when we can book them in.'

She said she was neutral about the merits of extending the rules and that her focus lately had shifted as she became more concerned about the mental health of her staff.

"My priority right now is to connect with people as much as I can and offer support, as no one has lived through this before," Ms Kourtidou said.

Melbourne Sports Podiatry owner Steve Singh had to close one of his clinics during the first lockdown and has continued to operate as a sole trader for two days a week, seeing only emergency clients.

"I've had to limit the services I provide because there's a lot of ambiguity around what patients are classified as emergency," Mr Singh said.

While his business could survive another two weeks, it was the long-term that worried him after Parliament extended the government's state of emergency powers for another six months earlier this week.

"The hard thing is, it's not necessarily the two weeks that's going to be the worst thing, it’s the bill being passed for six months," he said.

Mr Singh said a lot of businesses were investing in reopening and the possibility of another lockdown was worrying.

"The government can shut it off at the click of a finger, businesses may not be able to survive another lockdown," Mr Singh said.

Bat Your Lash owner Nadia Eizadi said she had lost more than $50,000 since closing her salon in March.

"We should have just gone into stage four from the beginning," Ms Eizadi said.

"I can’t even imagine what the extension would do. I just really want to get back to work and start paying off debts," she said.

If you or anyone you know needs support call Lifeline on 131 114, or Beyond Blue's coronavirus mental wellbeing support service on 1800 512 348.