Home » World News » From the Archives, 1985: Booby Island, a crossroads of Australian civilisation

Tiny Booby Island once a crossroads of civilisation

Archaeologists have discovered what they believe is the only site where five cultures associated with the settlement of Australia cross paths.

Paintings and graffiti in caves on tiny Booby Island, on the western boundary of Torres Strait at the junction of the Arafura and Coral seas, have yielded proof that the island was a “cultural crossroads”. 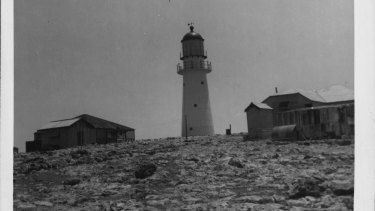 The caves are littered with paintings by Torres Strait Islanders. European sailors have also left their mark. Captain Bligh recommended that a food cache be established on the island when he called during his epic voyage in an open boat following the mutiny on the Bounty.

A team of marine archaeologists from the Queensland Museum has just returned from an expedition which discovered evidence that Macassan sailors, Melanesians from the Papua New Guinea mainland and Arnhem Land Aborigines also sailed in the area.

Extensive investigation of some of the cave drawings has revealed an Aboriginal painting of a Macassan prau, a unique vessel with telltale double rudders and triangular sails used by beche de mer fishermen out of Sulawesi.

The archaeologists also found evidence of Arnhem Land Aboriginal motifs and a drawing they dubbed the “mystery man”. At first they thought it might be of a Dutch East Indies sailor because of an arrow-like symbol near its head. But investigations back in Brisbane showed the “mystery man” had links with ceremonial figurines from the PNG mainland.

The curator of the Queensland Museum’s maritime archaeology section, Mr Ron Coleman, said yesterday the painting were a storehouse of cultures that sailed the Australian coast.

“Little Booby Island is a small flat rock sitting in the strait and yet the paintings show it was a cultural crossroads,” he said. “Until we found the painting of the ship it had always been that the Macassans stopped on the western side of the Gulf (of Carpentaria). The thing that clinched it for us was the double rudder. Not it’s a new ballgame in an archaeological sense.”

Mr Coleman, who has been leading the expedition diving on the Great Barrier reef wreck of the Pandora, the ship that was bringing captured Bounty mutineers back to England, went to Booby Island to investigate claims that a body wearing brass plates consistent with early Dutch explorers had been discovered in one of the caves.

“We did find a few scraps of iron and a few bones that turned out to be pig, probably the remnant of the cache for shipwrecked sailors, and little more. But the discovery of the paintings more than made up for our disappointment,” he said.

Booby Island is a piece of land 500 metres square.

It was given its name because of many brown gannets, or booby birds, meeting there.

When he became Governor of the colony of New South Wales in 1806, Captain Bligh proposed that shipwrecked sailors and castaways be sustained by a cache of salt meat, ship’s biscuits and fresh water to be hidden in one of the caves that he had seen on the island.

Thirty years later a sort of post office was established in the cave for passing ships and “Booby Island Depot” became “Post Office Cave”, the second post office to be established in Australia. A lighthouse was built on the island in 1890. It remains Australia’s northernmost manned lighthouse.

During the days of early European settlement, Torres Strait islanders were feared by whites as headhunters. But the islanders avoided Booby Island because their oral tradition spoke of a young woman being abandoned on the rock in a war between islands. She survived by metamorphosed into an evil witch, a “puri-puri” who destroyed men through her insatiable lust for sexual pleasure.

Mr Coleman spent some weeks during his latest expedition talking to islanders about their oral history. He found skull remains in one of the caves after being told that 100 warriors were buried after a war 100 years ago.