US President Donald Trump has defied concerns about his COVID-19 diagnosis to hold a public event at the White House in a bid to boost his election prospects.

Two weeks after the White House became the site of a coronavirus outbreak, hundreds of invited guests gathered on the South Lawn today for a “peaceful protest” centred on one of the President’s favourite policy topics: law and order. 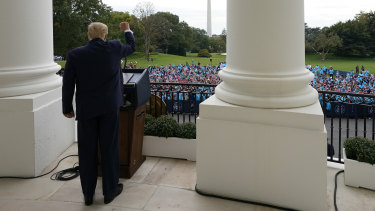 Speaking from his balcony days after being discharged from hospital, Trump delivered a buoyant, but short, speech to black and Latino supporters, claiming that if Joe Biden and the left win in November “they’ll launch a nationwide crusade against law enforcement”.

While he did not address his illness directly, Trump thanked “all the doctors and labs and scientists working so hard”, as well as the crowd who came out to see him.

“You get it,” he told the audience, most of whom were wearing masks but not socially distancing.

“I just want to thank you. Get out and vote – we’ve got to make this bigger than four years ago… This is the single most important election in the history of our country.” 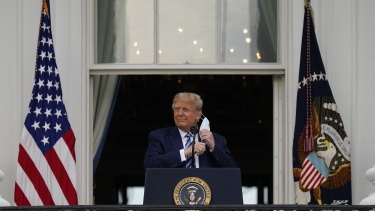 The event was the first public gathering Trump has held since contracting the virus, which has so far also killed more than 200,000 Americans and infected dozens of people within his orbit.

It took place amid ongoing concern about the President’s health and the safety of attendees, with experts warning that returning to public events too soon could risk infecting more people.

While the President has repeatedly claimed he feels “great”, the state of his health remains unclear due to inconsistent information and ongoing secrecy from his administration.

During a televised “medical evaluation” on Fox News on Saturday (AEDT), for instance, Trump insisted that “I didn’t have a problem with breathing” after he got the virus – even though his doctors had admitted he was forced to have supplementary oxygen after his levels dropped.

He also said that he was no longer on medication and had been tested again for the virus but was not sure if he was still infected, claiming he had not yet seen the results by that stage.

“I know I'm at either the bottom of the scale or free,” he told Fox News.

With three weeks until the election, Trump has been keen to escape the confines of the White House and return to the campaign trail as soon as he can.

Today's event was as much a show of strength over his condition, as it was an appeal to black and brown communities, most of whom have traditionally voted for the Democrats. 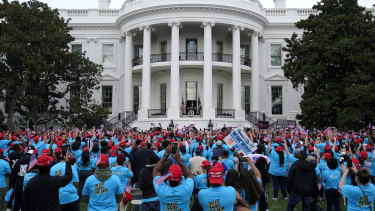 The crowd gathered in front of the White House. Credit:Alex Brandon

The speech lasted for about 15 minutes, with Trump using it to thank police, spruik his administration's criminal justice reforms, and talk up his so-called "Platinum Plan" which promises record reinvestment in black communities over the next four years.

The attendees were part of a group known as “Blexit”, which aims to convince African Americans to leave the Democrats. Most were wearing matching blue T-shirts emblazoned with the group’s name.

Following today’s event, the President is expected to fly to Florida on Monday for one of his trademark rallies.