Home » World News » ‘He will try and sneak or steal his way to victory’: Obama goes after Trump in forensic attack

Milwaukee: Former president Barack Obama and the Democratic Party's 2016 nominee Hillary Clinton have pleaded with progressive voters to show up at the polls on election day, warning them that Donald Trump will try to cheat his way to victory on November 3.

In a strikingly forceful speech, Obama said that Trump "will tear our democracy down if that’s what it takes to win" while Clinton said the President would try to "sneak or steal his way to victory". 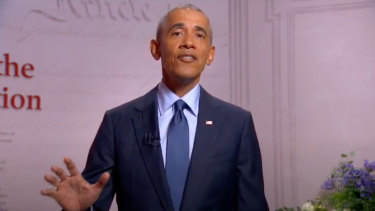 Former president Barack Obama delivers a stinging rebuke of Donald Trump as a threat to US democracy.Credit:Democratic National Convention

"I am also asking you to believe in your own ability – to embrace your own responsibility as citizens – to make sure that the basic tenets of our democracy endure.

"Because that’s what at stake right now: our democracy."

Following on from his wife's speech on the first night of the convention, Obama delivered his harshest verdict yet of his successor.

"Donald Trump hasn’t grown into the job because he can’t," Obama said. "And the consequences of that failure are severe. 170,000 Americans dead. Millions of jobs gone while those at the top take in more than ever. Our worst impulses unleashed, our proud reputation around the world badly diminished, and our democratic institutions threatened like never before."

Clinton launched a similar attack, saying Trump had proven a worse president than she had imagined when she campaigned against him four years ago.

"I wish Donald Trump knew how to be a president because America needs a president right now," she said.

"Remember in 2016 when Trump asked, 'What do you have to lose?' Well, now we know: our health, our jobs, even our lives, our leadership in the world and, yes, our post office."

Noting that she won more votes than Trump but lost the electoral college, Clinton said: "Remember, Joe and Kamala can win three million more votes and still lose. Take it from me. We need numbers so overwhelming Trump can’t sneak or steal his way to victory." 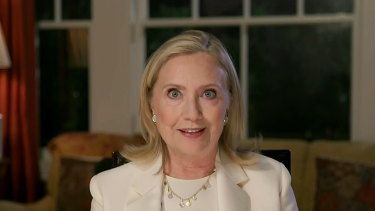 Hillary Clinton said Democrats could not take victory for granted, as many did in 2016.Credit:DNC

Clinton said: "This can’t be another woulda-coulda-shoulda election.

"For four years, people have said to me, 'I didn’t realise how dangerous he was. 'I wish I could go back and do it over.' 'I should have voted'."

In her speech Democratic House Speaker Nancy Pelosi predicted that the party would win the White House, control of the Senate and expand its majority in the House of Representatives.

"We will elect President Biden, whose heart is full of love for America, and rid the country of Trump’s heartless disregard for America’s goodness," Pelosi said.

"Joe Biden is the President we need right now: battle-tested, forward-looking, honest and authentic. He has never forgotten where he comes from and who he fights for."

Referring to her reputation as a policy wonk, Massachusetts Senator Elizabeth Warren said: "Joe Biden has some really good plans – plans to bring back union jobs in manufacturing and create new union jobs in clean energy. Plans to increase Social Security benefits, cancel billions in student loan debt, and make our bankruptcy laws work for families instead of the creditors who cheat them.

"These plans reflect a central truth: our economic system has been rigged to give bail-outs to billionaires and kick dirt in the face of everyone else."