The men were identified from online video and security cameras as being among 100 thugs dressed in white shirts who hunted and hit democracy protesters returning from a march with metal poles and canes on Sunday evening.

The men were arrested for illegal assembly but police said more charges could follow. 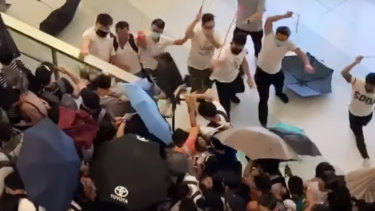 The South China Morning Post reported several of the men "had triad backgrounds", and that members of Wo Shing Wo and 14K triads were involved in the attack, in which 45 people were injured.

Professor Tit-wing Lo of the City University of Hong Kong said the two triad groups active in the Yuen Long area were Wo Shing Wo and 14K, and the attack occurred on Wo Shing Wo territory. But he said others involved in the attacks were likely villagers hired for money. Local media reported some arrested men were unemployed or labourers. 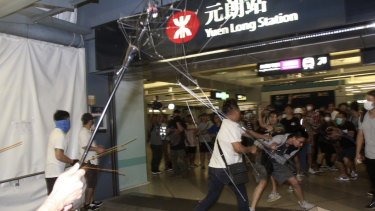 Local pro-Beijing politician Junius Ho, seen on video shaking hands with some of the white-shirted men after the attacks, denied he was behind them.

Ho stormed out of a TV debate on Tuesday with pro-democracy politician Eddie Chu, after grabbing Chu and shaking him to demand he call off any more democracy protests.

But in a backlash to Ho, petitions were circulated at his former school – Hong Kong's Queens College – and in the racing industry, calling for him to be suspended from the Jockey Club and expelled from the Legislative Council. The Law Society said it was investigating a complaint against Ho.

Police commissioner Stephen Lo said the first police to arrive at Yuen Long, 35 minutes after emergency calls for help, didn't intervene because they "felt their safety could not be guaranteed". The local police station pulled down its shutters. Witnesses complained on social media that even when riot police arrived at 1am they were seen talking to the attackers and failed to conduct identity checks.