Berlin: Early in the pandemic, as thousands of American troops began NATO manoeuvres in Germany, Attila Hildmann did a YouTube search to see what it was all about. He quickly came across videos posted by German followers of QAnon.

In their telling, this was no NATO exercise. It was a covert operation by US President Donald Trump to liberate Germany from Chancellor Angela Merkel's government — something they applauded.

"The Q movement said these are troops that will free the German people from Merkel," said Hildmann, a vegan celebrity cook who had not heard of QAnon before last spring. "I very much hope that Q is real." 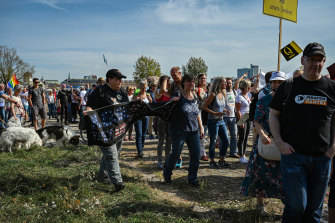 In the United States, QAnon has already evolved from a fringe internet subculture into a mass movement veering into the mainstream. But the pandemic is supercharging conspiracy theories far beyond American shores, and QAnon is metastasising in Europe as well.

Groups have sprung up from the Netherlands to the Balkans. In Britain, QAnon-themed protests under the banner of "Save Our Children" have taken place in more than 20 cities and towns, attracting a more female and less right-wing demographic.

But it is in Germany that QAnon seems to have made the deepest inroads. With what is regarded as the largest following — an estimated 200,000 people — in the non-English-speaking world, it has quickly built audiences on YouTube, Facebook and the Telegram messenger app. People wave Q flags during protests against coronavirus measures. 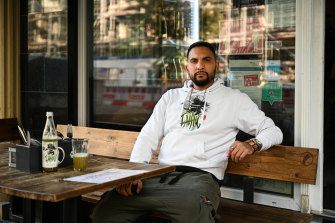 Attila Hildmann at his vegan restaurant in Berlin. He had not heard of QAnon before last spring. “I very much hope that Q is real,” he said.Credit:Lena Mucha/The New York Times

And in Germany, like in the United States, far-right activists were the first to latch on, making QAnon an unexpected and volatile new political element when the authorities were already struggling to root out extremist networks.

"There is a very big overlap," said Josef Holnburger, a data scientist who has been tracking QAnon in Germany. "Far-right influencers and groups were the first ones to aggressively push QAnon."

Officials are baffled that a seemingly wacky conspiracy theory about Trump taking on a "deep state" of Satanists and paedophiles has resonated in Germany. Polls show that trust in Merkel's government is high, while the far-right Alternative for Germany party, or AfD, has been struggling.

"I was astonished that QAnon is gaining such momentum here," said Patrick Sensburg, an MP in Merkel's conservative party and member of the intelligence oversight committee. "It seemed like such an American thing. But it's falling on fertile ground."

The mythology and language QAnon uses — from claims of ritual child murder to revenge fantasies against liberal elites — conjure ancient anti-Semitic tropes and putsch fantasies that have long animated Germany's far-right fringe. Now those groups are seeking to harness the theory's viral popularity to reach a wider audience.

QAnon is drawing an ideologically incoherent mixture of vaccine opponents, fringe thinkers and ordinary citizens who say the threat of the pandemic is overstated and government restrictions unwarranted. Not everyone who now aligns with QAnon believes everything the group espouses, or endorses violence.

Until a few months ago, Hildmann was popularly known merely for his restaurant and cookbooks and as a guest on television cooking shows.

But with 80,000 followers on Telegram, he has since become one of QAnon's most important amplifiers in Germany. He is a noisy regular at coronavirus protests, which drew more than 40,000 people in Berlin this summer, to bridle against what he considers to be a fake pandemic concocted by the "deep state" to strip away liberties.

He calls Merkel a "Zionist Jew" and vents against the "new world order" and the Rothschild banking family. He no longer recognises Germany's postwar democratic order and darkly predicts civil war.

During a recent interview at his vegan restaurant in an upmarket neighbourhood of Berlin, admirer after admirer — a civil servant, a mail carrier, a geography student — approached to thank him, not for his food, but for raising awareness about QAnon.

Experts worry that activists like Hildmann are providing a new and seemingly more acceptable conduit for far-right ideas.

"QAnon doesn't openly fly the colours of fascism, it sells it as secret code," said Stephan Kramer, head of domestic intelligence in the eastern state of Thuringia. "This gives it an access point to broader German society, where everyone thinks of themselves as immune to Nazism because of history."

"It's very dangerous," Kramer added. "It's something that has jumped from the virtual world into the real world. And if the US is anything to go by, it's going to gain speed."

The QAnon conspiracy theory emerged in the United States in 2017, when a pseudonymous online poster claiming to hold the highest US security clearance — Q — began dropping cryptic messages on the message board 4Chan. Global elites were kidnapping children and keeping them in underground prisons to extract a life-prolonging substance from their blood, Q hinted. A "storm" was coming, followed by a "great awakening."

For historians and far-right extremism experts, QAnon is both a very new and a very old phenomenon. Made in modern America, it has powerful echoes of the European anti-Semitism of centuries past, which was at the root of the worst violence the continent has known.

The idea of a bloodsucking, rootless elite that abuses and even eats children is reminiscent of medieval propaganda about Jews drinking the blood of Christian babies, said Miro Dittrich, a far-right extremism expert at the Berlin-based Amadeu Antonio Foundation.

"It's the 21-century version of blood libel," Dittrich said. "The idea of a global conspiracy of elites is deeply anti-Semitic. 'Globalists' is code for Jews."

The ignition switch for QAnon's spread in Germany was "Defender-Europe 2020", a large-scale NATO exercise, said Holnburger, the political scientist.

When it was scaled back this spring because of the coronavirus, QAnon followers contended that Merkel had used a "fake pandemic" to scupper a secret liberation plan. 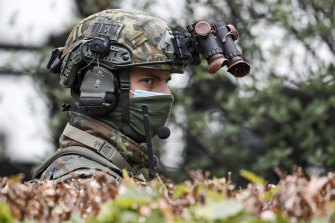 Annual NATO exercises were used by QAnon conspiracy theorists to push the idea of an army led by Donald Trump restoring the German Reich.Credit:AP

Then one far-right movement, known as the Reichsbürger, or citizens of the Reich, jumped onto the QAnon traffic online to give greater visibility to its own conspiracy theory.

The Reichsbürger, estimated by the government to have about 19,000 followers, believe that Germany's postwar republic is not a sovereign country but a corporation set up by the allies after World War II. The QAnon conspiracies dovetailed with their own and offered the prospect of an army led by Trump restoring the German Reich.

On March 5, the elements of the two movements fused into a common Facebook group, followed a week later by a Telegram channel.

Two weeks later, in the middle of the lockdown, the German pop star Xavier Naidoo, a former judge on Germany's equivalent of Australian Idol, joined a QAnon group and posted a tearful YouTube video in which he told his followers about children being liberated from underground prisons. A far-right influencer, Oliver Janich, reposted it to his tens of thousands of Telegram followers.

Since then, the biggest German-language QAnon channel on Telegram, Qlobal Change, has quadrupled its followers to 123,000. On YouTube, it has more than 18 million views. Overall, the number of followers of QAnon-related accounts on all platforms has risen to more than 200,000, estimates Dittrich of the Amadeu-Antonio Foundation.

In the country of the Holocaust, promoting Nazi propaganda or inciting hatred is punishable by up to five years in jail, and two years ago the government passed strict legislation designed to enforce its laws online.

But conspiracy theories and lies are not illegal unless they veer into hate speech and extremist content, and officials admit they have found QAnon's spread hard to police.

Some QAnon followers are well-known extremists, like Marko Gross, a former police sniper and the leader of a far-right group that hoarded weapons and ammunition.

But many are people who in the early days of the pandemic had nothing in common with the far right, Dittrich pointed out.

"You could see it in real time in the Telegram channels," he said. "Those who started in April with worries about the lockdown became more and more radicalised."

These days you see it on the streets of Germany, too.

Michael Ballweg, a Stuttgart-based software entrepreneur who founded Querdenken-711, the organisation that has been at the centre of protests against coronavirus restrictions, recently started referencing QAnon.

An eastern youth chapter of the AfD has used "WWG1WGA," an abbreviation for the QAnon motto "Where we go one, we go all," on its Facebook pages.

Asked about the dangers of QAnon, the federal domestic intelligence service replied with an statement saying that "such conspiracy theories can develop into a danger when anti-Semitic violence or violence against political officials is legitimized with a threat from the 'deep state.'"

The biggest risk, say experts like Dittrich and Holnburger, may come when the promised salvation fails to arrive.

"Q always says: 'Trust the plan. You have to wait. Trump's people will take care of it,'" Holnburger said. "If Trump does not invade Germany, then some might say, 'Let's take the plan in our own hands.'"

Get our Coronavirus Update newsletter for the day’s crucial developments at a glance, the numbers you need to know and what our readers are saying. Sign up to The Sydney Morning Herald’s newsletter here and The Age’s here.