The Cathedral Church at the Dadivank monastery is packed.

The Armenian chant, or sharakan, used during Holy Mass sounds especially melancholy this Sunday – a beautiful tenor voice filling the small domed space as members of the congregation wipe away tears.

Perhaps they have lost loved ones in this war. Perhaps they grieve their nation’s defeat.

Perhaps it is grief that this holy place for Armenian Christians will pass into Azerbaijani hands on Wednesday. 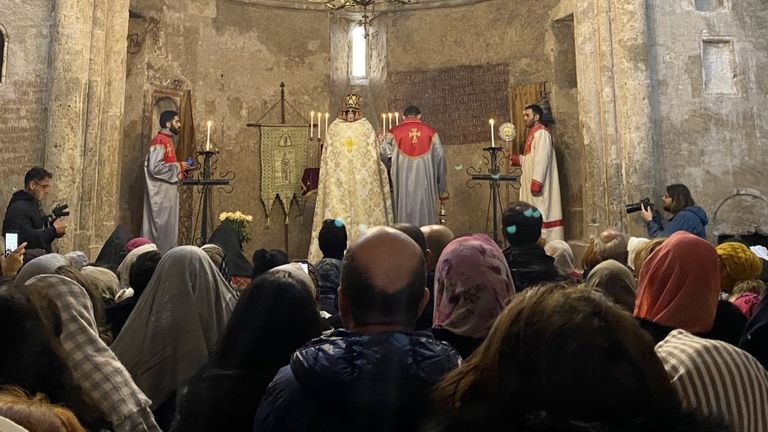 This is the last Sunday when the medieval monastic complex at Dadivank remains de facto theirs.

“It is our heritage and we should look after and protect it,” says Sona Khachaturyan who has come to visit from the Armenian capital, Yerevan.

“Unfortunately it will become part of Azerbaijan. It’s painful but I don’t want to say goodbye because I’m sure I’ll be back.”

The Russian tricolour flag flies at the entrance to the monastery complex.

A Russian tank sits in the courtyard, barrel pointing at the oncoming traffic. 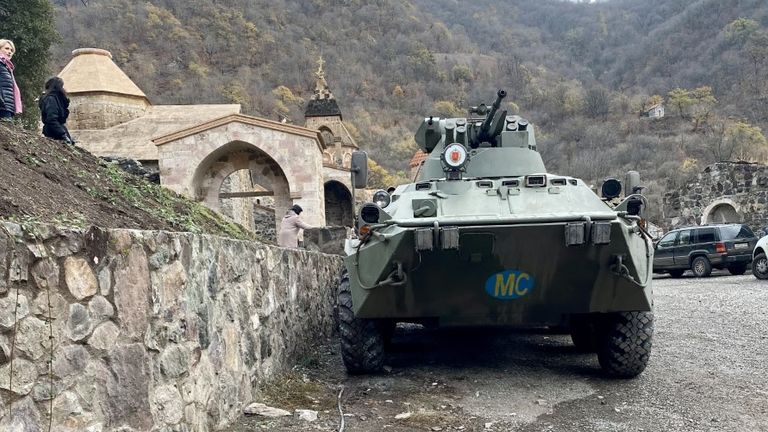 Azerbaijan has promised that Armenian Christians will be provided with continued access to Dadivank and other religious sites in territories that will soon be theirs.

The Russians are here to make sure they keep their word.

“Azerbaijanis are not Turks but they behave like them,” says Father Shmavan, who came from Yerevan to help officiate the service.

“The Ottoman Turks promised that everything would be okay but when the Young Turks came to power they started the Armenian genocide.

“There were a lot of promises made by the Aliyev dynasty starting with Heydar and finishing with Ilham Aliyev, but they don’t keep their promises.” The deportation and mass killing of around 1.5 million ethnic Armenians as the Ottoman Empire collapsed is a wound which will never heal for Armenians and the huge Armenian diaspora.

It was the bogeyman in Prime Minister Nikol Pashinyan’s wartime rhetoric.

Turkey and Azerbaijan are the only two states which still refuse to recognise the genocide.

No wonder Father Shmavan has little faith in their promises.

Now the fear and the language of cultural genocide is reappearing. 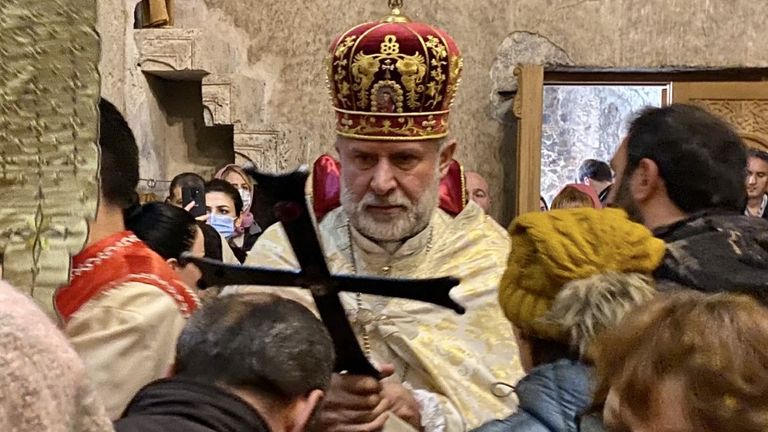 Much of Armenia’s cultural heritage was destroyed when Western Armenia was absorbed into Turkey in the first part of the 20th century.

With the territorial losses incurred as a result of this war, Armenia is squeezed again.

These ancient sites though are impressive for their resilience. During Soviet times when Kalbajar was in Azerbaijani hands, locals kept their cattle in the Dadivank monastery.

The layer of soot from the fires they burnt helped preserve the 12th century frescoes underneath which were only revealed during renovations in the early 1990s. We decide to visit the 4th century monastery complex at Amaras.

It is still under Armenian control but is situated in the south eastern corner of Nagorno-Karabakh where Azerbaijan has recaptured a lot of territory. It is isolated and precarious.

The little white church at its centre is surrounded by thick, fortified walls. When Eastern Armenia was under Russian control in the 19th century, Amaras was a frontier fortress.

Now again it is a militarised zone. The Azerbaijani positions are three kilometres away, at the top of the hill on the horizon.

The Russian flag flies over the ramparts but an Armenian unit is stationed here for now. The entrance is through a hole in the wall. 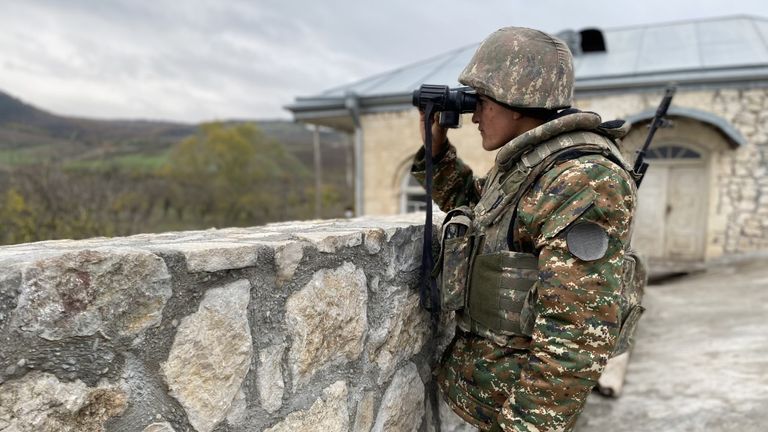 The soldiers have barbecued a pig and invite us to eat with them inside the fortified walls. There is no electricity so we eat by the light of our mobile phones.

“It is surprising that you see me eating at a table because all my friends are still in the trenches,” says Artak Hovhannesyan.

“If you stand at this monastery and look right, left and behind the trenches are still full.”

The Russian peacekeepers have an initial mandate of five years but that will most likely be extended.

Despite their presence, both sides will need to keep their trenches manned. As this conflict re-freezes, this kind of military effort is needed to maintain the new status quo.