Former foreign affairs minister Bob Carr says if the federal government allows the United States to extradite WikiLeaks founder Julian Assange for exposing war crimes, it will set a precedent that could allow any Australian living abroad to be delivered into the clutches of third countries and prosecuted for breaching national security laws.

Mr Carr, who as foreign minister said it "wouldn't be a matter of concern to Australia" to make a case on Mr Assange's behalf, made his comments as Amnesty International Australia handed a petition of 400,000 signatures to the US consulate asking for the charges against Mr Assange to be dropped. 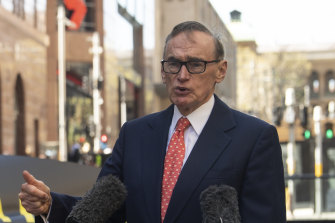 "If America can get away with this — that is digging up an Australian in London and putting him on trial for breaching their laws — why can't another government do the same thing? For example, an Australian campaigning for human rights in Myanmar, that Australian in theory could be sought by the government of Myanmar and brought back to Myanmar from London and put on trial there for breach of their national security laws."

He also said Australia needed to examine whether it wished to continue bilateral ties with China following the expulsion from that country of two Australian journalists.

US President Donald Trump became one of Mr Assange's biggest cheerleaders after WikiLeaks published emails stolen from the Democrats in 2016 and allegedly offered Mr Assange a presidential pardon if he agreed to say that Russia was not involved in leaking the emails.

But last year his administration expanded the indictment brought by the Obama administration to include crimes under the Espionage Act. The current indictment against Mr Assange is unrelated to the Russian email hack, but has to do with his role in publishing military cables obtained by former intelligence analyst Chelsea Manning.

These included evidence of US military helicopters firing on civilians during the Iraq war, information about Guantanamo Bay detainees held without trial and civilian casualty figures. It also included the names of people who had provided information to the US government.

The Obama administration reportedly considered espionage charges but abandoned the notion due to the implications it might have for the right to free speech, which is protected under the First Amendment of the US constitution.

In 2013, Mr Carr was asked in budget estimates whether Australia had expressed a diplomatic view that Mr Assange was entitled to protection under the First Amendment. He replied: "It would not be a matter of concern to Australia to make a case for him, no. Why would we do that?"

But he said on Tuesday these comments were made at a time that the extradition of Mr Assange was not under active consideration.

Chamira Gamage from Amnesty International Australia said the petition was among Amnesty's biggest petitions of all time.

Foreign Minister Marise Payne has been approached for comment.