Mosques across the country could start sounding the daily call to prayer through loudspeakers following a series of unofficial pilot programmes.

Scores of communities were allowed to use public address systems to alert the faithful during the holy month of Ramadan, which ended last night.

Several councils gave permission for the call – known as the adhan – to be broadcast each evening to help followers keep in touch with their places of worship during the lockdown.

Mosque elders are now planning to apply to councils to make the adhan a permanent fixture after Ramadan. 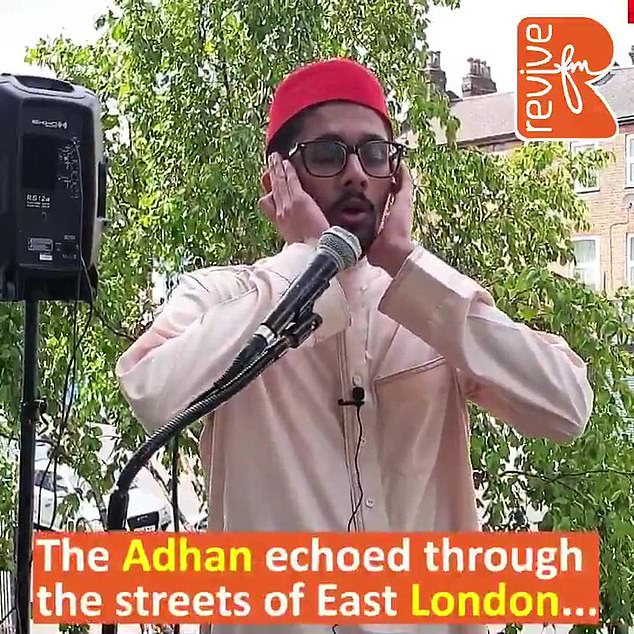 Mosques across the country could start sounding the daily call to prayer through loudspeakers following a series of unofficial pilot programmes. Pictured: Newham’s Minhaj-ul-Quran mosque, in London, hopes to make the call to prayer every day

Allama Sadiq Qureshi, who is an imam at the Minhaj-ul-Quran mosque in Newham, East London, said: ‘We want this practice to continue in the future.

‘But at the same time, we must be bothered about our neighbours, we need their permission. If they are happy, then we are going to start it.

‘Just one symbolic adhan per day, if Newham council allow us. Just one adhan at the day time, at dhuhr [afternoon prayer], then it will be really good.’

He said the Newham Muslim Forum, a local umbrella body of mosques, is considering making the application after Ramadan.

At least 25 mosques in London and dozens more across the country have joined over the past four weeks.

The initiative began when Kensington and Chelsea Council in London gave permission to the borough’s biggest mosque, known as the Al-Manaar, to start broadcasting out the nightly reminder. 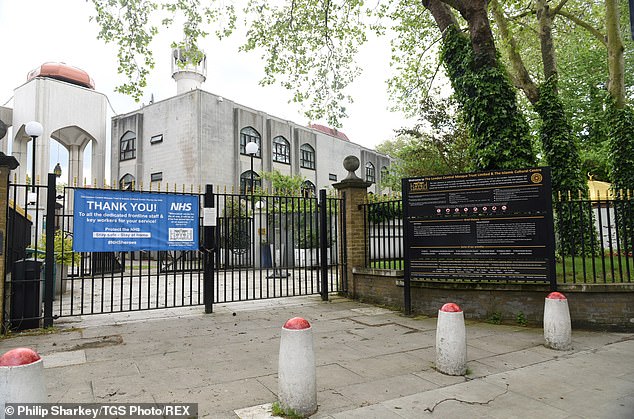 Scores of communities were allowed to use public address systems to alert the faithful during the holy month of Ramadan, which ended last night. Pictured: London Central Mosque, near Regents Park

Following that, Waltham Forest Council in North-East London allowed nine mosques in the borough to broadcast the adhan every evening and again on Friday afternoons to mark the beginning of the most important ceremonial prayer of the Muslim week, known as jumuah.

One of the biggest mosques in the borough, the Waltham Forest Islamic Association (WFIA), sounded the adhan loud enough for it to be heard within a one-mile radius.

Video footage was posted on social media showing the muezzin – the cleric who makes the call to prayer – reciting from the rooftop of the mosque.

Other mosques in the borough have placed concert-style speakers on their front doors to make the call.

Yesterday, Raja Ilyas, the general secretary of the WFIA, said: ‘My wish is that if we can recite adhan at least at jumuah or one time [per day], but it’s my wish.

‘I can’t force my wish on anybody, especially on the local council and local residents – it’s my wish being a Muslim.’

Meanwhile, council leaders have said the response they received from the community has been broadly positive, although there were some complaints.

Cllr Elizabeth Campbell, the Conservative leader of Kensington and Chelsea Council, said: ‘Allowing the adhan to be broadcast has helped encourage people to stay home and stay safe while maintaining the sense of togetherness and community.

Elsewhere, a cleric performed the adhan as a one-off outside the towers of Canary Wharf for the evening prayer. Other venues included Chesham, Buckinghamshire and Preston, Lancashire.

In Islamic countries, the adhan is broadcast from mosques five times a day for each of the daily ceremonial prayers.

The first call happens at dawn and the last one, known as isha, takes place around bedtime.

Until now, most mosques in Britain have been banned from using loudspeakers on noise pollution grounds. 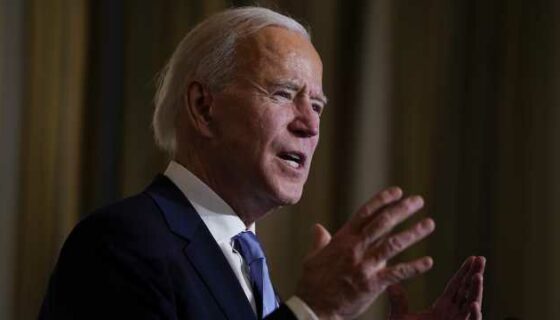