The NSA spied on the Danish government and European defense contractors to gain information on its fighter acquisition program, according to Danish media reports.

The US intelligence agency allegedly targeted Denmark’s Ministry of Finance and Ministry of Foreign Affairs before the country selected the American Lockheed Martin F-35 stealth fighter for its New Fighter Program in 2016.

An internal whistleblower in the Danish Defense Intelligence Service (FE) made the allegations, according to the country’s public broadcaster DR. 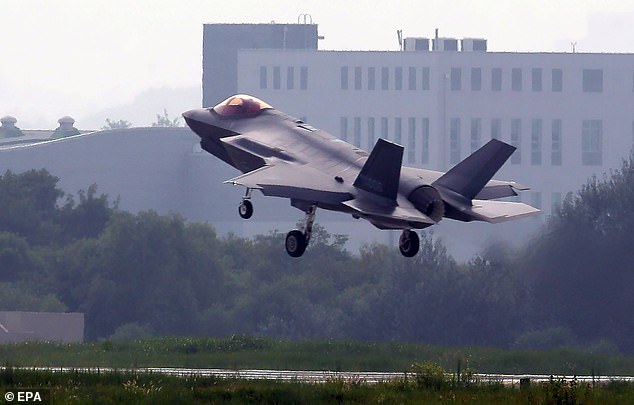 The NSA allegedly targeted Denmark’s Ministry of Finance and Ministry of Foreign Affairs before the country selected the American Lockheed Martin F-35 stealth fighter for its New Fighter Program in 2016. Pictured: A F-35A stealth fighter lands at an air base after a training flight in Cheongju, South Korea

The NSA was able to tap fiberoptic communication cables passing through Denmark under an existing intelligence-sharing agreement between the two countries, the whistleblower said.

It wanted to gather information on Danish defense company Terma in a ‘targeted search’ ahead of the country’s decision to replace its current fleet of F-16s with F-35s in June 2016, the source alleged.

The NSA reportedly used it to access Danish communication cables and FE databases to gather information on Eurofighter GmbH and Saab, who were also contending for a contract in the Fighter Program.

DR said it was unable to determine exactly what information the NSA was looking for or how the US intelligence service may have used the information about the fighter companies.

But concerns about the breach of trust led to the broadcaster’s source making two internal reports to FE.

The reports allegedly warned the NSA was also targeting a number of Denmark’s ‘closest neighbors,’ including France, Germany, the Netherlands, Norway, and Sweden.