Home » World News » Post-Brexit border chaos 'could cause queue of 7,000 lorries in Kent'

Leaked Government report warns post-Brexit border chaos could cause queue of 7,000 lorries in Kent, two day delays for freight to make it to the EU and long waits for Eurostar trains

Post-Brexit border chaos could result in a queue of 7,000 lorries in Kent with heavy goods vehicles having to wait two days to make the crossing to the EU, according to a leaked Government report.

A ‘reasonable worst case’ scenario put forward by the Border and Protocol Delivery Group also warned Eurostar passengers could have to wait an extra two hours for trains.

The report, seen by The Guardian, suggested that between 50 and 70 per cent of large businesses will be ready for post-Brexit customs arrangements on January 1. 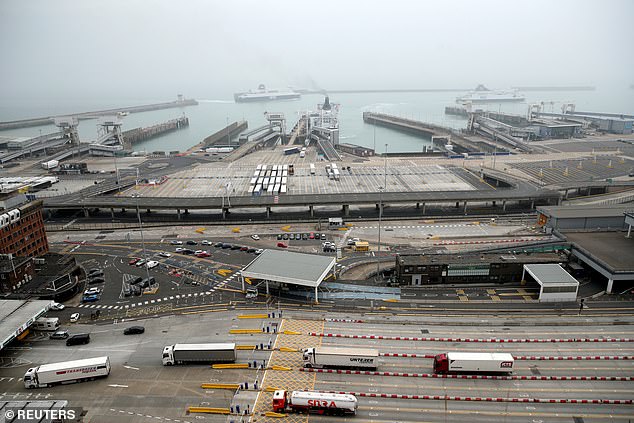 A leaked Government report suggested post-Brexit border chaos could result in a queue of 7,000 lorries in Kent. The Port of Dover is pictured on August 14

Meanwhile, only 20 to 40 per cent of small to medium sized firms will be prepared when the transition period comes to an end in December.

Under the ‘reasonable worst case’ scenario, based on between 30 to 60 per cent of lorries being ready for new border arrangements, the report estimated ‘a maximum queue of 6,500 HGVs may develop in January’.

However, it warns that could grow to 7,000 by the first week of February because of ‘sustained disruption’.

The report added:  ‘In each case it is estimated that HGVs could take two days to reach the front of the queue.’

It also warns of ‘significant disruption’ for Eurostar passengers in the event the UK and EU split without agreeing terms on their future relationship.

It cites modelling from last year which suggested new border controls could result in ‘queues of many thousands’.

The 46-page report, dated last week, also said an essential IT system used by hauliers will not be tested publicly until the end of November, just one month before the transition period ends.

The emergence of the report comes less than a week after road haulage chiefs warned MPs there is an 80 per cent chance of ‘chaos in Kent’ on January 1 because the Government has failed to put in place an adequate post-Brexit customs system.

Richard Burnett, chief executive of the Road Haulage Association, said ministers were in ‘denial’ about the prospect of a border meltdown as lorry drivers are forced to adapt to new paperwork.

However, a Cabinet Office spokeswoman said in a statement the Government was using a ‘stretching scenario’ in the leaked report as opposed to a prediction.

She said: ‘As a responsible government we continue to make extensive preparations for a wide range of scenarios, including the reasonable worst case.

‘This is not a forecast or prediction of what will happen but rather a stretching scenario. It reflects a responsible government ensuring we are ready for all eventualities.’