A waste disposal operator has been fined $82,610 for illegally dumping building materials and household rubbish on a rental property in Diggers Rest, before blaming the landlord for the mess.

It is not the first time Alex Anasis, who has owned a string of skip-bin hire businesses over the past decade, has run afoul of the Environment Protection Authority. 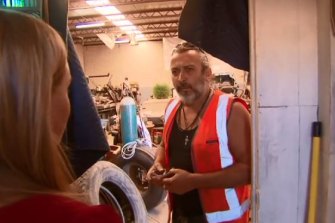 The 45-year-old was fined $62,000 at Sunshine Magistrates Court in 2016 when Brimbank Council launched action over similar dumping at another rental property in Ardeer.

The former owner of the now defunct Dirty Harry's waste disposal business has also been the subject of investigations by the EPA, WorkSafe and local councils over links to illegal dump sites in Dallas, Campbellfield and Heidelberg.

At Moorabbin Magistrates Court on Monday, magistrate Therese McCarthy ordered that Mr Anasis must also pay $1000 in costs to the EPA, which used drones to monitor trucks dumping waste at the rural property in Diggers Rest that was later traced to a business in Heidelberg.

Ms McCarthy noted the need for deterrence and denunciation when handing down her sentence, warning "people should be sent a strong message that this type of conduct is unacceptable".

Mr Anasis maintained his innocence when contacted by The Age, insisting he had been engaged by the owners of the Diggers Rest property to clean up the site.

"All my evidence fell on deaf ears, no one was listening ," he said.

Mr Anasis also blamed the owner of an Ardeer site, Bill Patten, who has been saddled with a million-dollar clean-up bill after leasing the land to Mr Anasis in 2014.

In 2015 Mr Anasis was ordered by the Victorian Civil and Administrative Tribunal to remove tonnes of rubbish, covering the area of a soccer pitch, from Mr Patten's property. 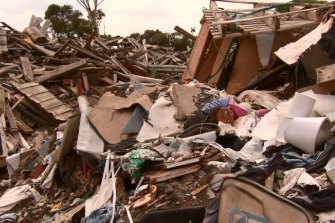 Rubbish piles at the Ardeer property.Credit:Nine

Mr Anasis failed to comply with the order and now Brimbank Council is pursuing Mr Patten.

"Tell your mate from the council to go and get f—ed and leave us alone," Mr Anasis said in the letter to Mr Patten in August 2015.

"I know we have made a bit of a mess, but if your [sic] thinking of going further to court then ring me Bill and I will asign [sic] all my debt to you and I will walk away.

"All my trucks and machinery are owned by the banks. I have no home, nothing at all in my name."

Mr Patten said tenants – rather than landlords acting in good faith – should be held responsible for criminal behaviour.

"There is an obvious loophole that is being exploited by unscrupulous operators and now I'm being pursued to clean up the site," Mr Patten said.

"This will eventually cost me my entire superannuation. I'll probably end up bankrupt and having to walk away from the property with nothing."

Our Morning Edition newsletter is a curated guide to the most important and interesting stories, analysis and insights. Sign up here.