Is Rishi Sunak propping up failing firms with taxpayers’ cash? The number of businesses going bust falls almost 40 per cent in the third quarter of 2020 compared to this time last year

Rishi Sunak was accused of propping up failing businesses with taxpayers money today amid figures showing a dramatic decline in insolvencies during the coronavirus pandemic.

The Chancellor has ploughed billions into securing the jobs of millions of workers through furlough payments and schemes underwriting business loans for thousands of firms.

But the Government’s Insolvency Service (IS) shows that the number of firms going bust in the third quarter of 2020 was 39 per cent down on the same period in 2019, before the coronavirus pandemic struck.

The agency said that several steps taken by the chancellor, including financial relief and orders for the legal system to go easy on struggling firms, have had an affect on the numbers.

Former minister Sir Desmond Swayne said the figures suggested natural failures of businesses were being prevented by the government ‘at huge expense’.

‘If they are not viable, and many businesses will not have been viable, that is an enormous bill that we are all going to have to repay over a long period of time. Best we get on with it,’ the Tory MP told MailOnline. 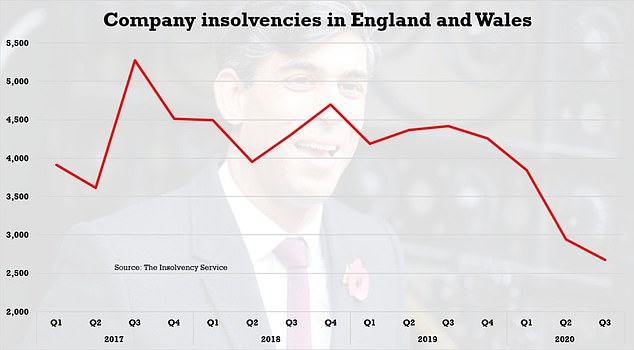 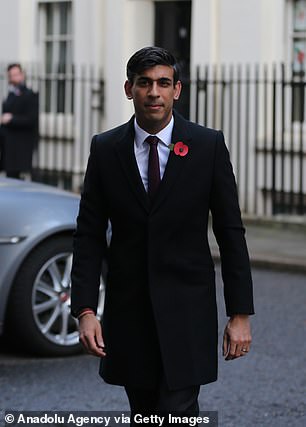 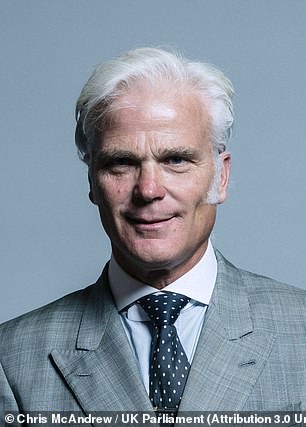 The Chancellor (left) has ploughed billions into securing the jobs of millions of workers through furlough payments and schemes underwriting business loans for thousands of firms. But Former minister Sir Desmond Swayne (right) said the figures suggested natural failures of businesses were being prevented by the government ‘at huge expense’ 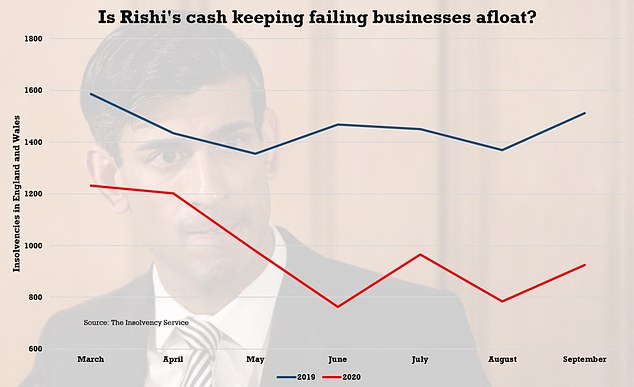 In another extraordinary policy shift set to cost the government £40billion and slammed as ‘wasteful and poorly targeted’ by experts, the Chancellor admitted the recovery had ‘slowed’ and businesses now faced ‘uncertainty’ stretching into next year.

The move raised fears that the country is in for a longer haul than ministers have been admitting, as the blanket lockdown in England is due to lift on December 2.

Rishi Sunak confirmed last week that the furlough scheme will be extended until the end of March, with employers only having to contribute national insurance and pension costs.

The Bank of England estimated that 5.5million people could be placed on furlough.

As the Treasury estimates costs of a billion pounds a month for every billion workers on the scheme, that would suggest a bill of £5,5billion a month – or £27.5billion to the end of March.

The Resolution Foundation think-tank says the monthly cost could be even higher at £6.2billion a month – implying a total of £31billion.

Grants for the self-employed are being increased from 40 per cent of average previous profits to 80 per cent between November and January.

The Treasury says the grants are expected to cost £7.3billion over that period – with another round to come between February and April.

Up front funding for the devolved administrations will increase by £2billion, calculated based on central government spending.

Mr Sunak said the scheme offering a £1,000 bonus for firms who bring back furloughed workers beyond February will ‘fall away’ because of his other announcements.

That could potentially save the Treasury £8billion. However, Mr Sunak promised that another scheme will take its place later.

Workers will now be able to get furlough at 80 per cent of their usual wage until the end of March, up to a ceiling of £2,500 a month, with employers only having to contribute national insurance and pension costs.

In a Commons statement, Mr Sunak also confirmed that grants for the self-employed will be paid at 80 per cent of average previous profits for November to January, rather than 40 per cent.

But in a report on the third quarter of 2020 at the end of October, before he extended the furlough again, The Insolvency Service said that his interventions on the economy were impacting on insolvencies.

It said a 9 per cent quarter-on-quarter fall had been driven by a fall in Creditors’ Voluntary Liquidation (CVL), where the directors of a company deliberately shut it down.

It noted: ‘The reduction in company insolvencies compared to the same quarter last year was likely to be partly driven by Government measures put in place in response to the coronavirus (COVID 19) pandemic, including:

‘As the Insolvency Service does not record whether an insolvency is directly related to the coronavirus pandemic, it is not possible to state its direct effect on insolvency volumes.’

Last week it was revealed British banks have prevented fraudulent coronavirus loans worth more than a billion pounds being paid out to criminals trying to game the pandemic support system.

Almost 27,000 dubious applications to the Bounce Back Loan Scheme were blocked by lenders over concerns they could be fraudulent, the British Business Bank said in evidence to MPs.

The figure, revealed to the Public Accounts Committee, equates to 2.5 per cent of the cash handed out under the £40 billion scheme.

And it will inevitably raise questions about how many more fraudulent claims were able to access the cash.