A student was shocked when he peeled a banana to find it was ‘double barrelled’ with not one but two fingers inside the skin.

Student Tom Symes bought a bunch of bananas from his local Tesco, but failed to notice that one was considerably larger than the others.

The 24-year-old was perplexed when he opened the banana, his favourite fruit, to find two inside, merged together.

He eventually overcame the surprise and ate one of the fingers before giving the second to his mum. 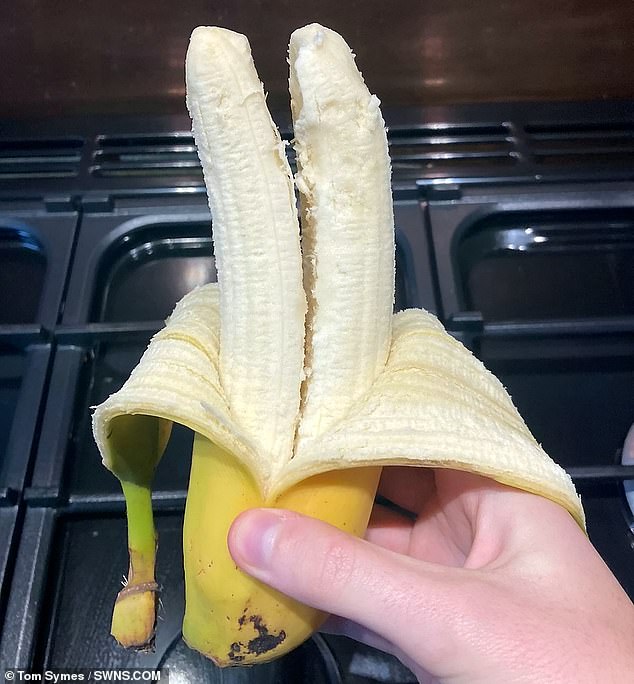 Student Tom Symes, 24, was perplexed when he opened a banana, his favourite fruit, to find two inside, merged together

The shocked student said: ‘I was immediately astonished by its girth. Upon opening, it was revealed to be a double banana in one skin.

‘I was surprised and dumbfounded at first. I thought it might have been a bit rotten so I was glad to see there were no spiders’ eggs inside.’

Tom, from Horsham, West Sussex, bought the banana from his local Tesco at Broadbridge Heath on Friday.

He did not spot the double-banana in the supermarket because it was in the middle of the bunch. 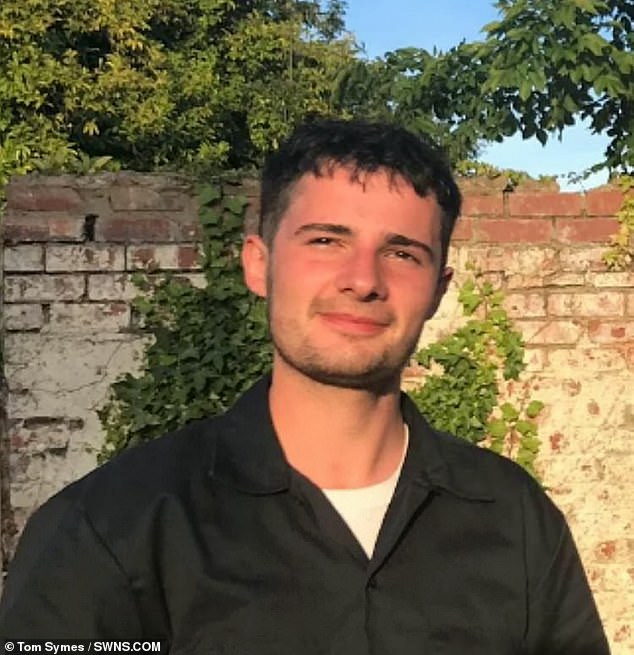 Tom had bought a bunch of bananas from his local Tesco near Horsham, but failed to notice that one was considerably larger than the others

Tom said: ‘I didn’t realise what I had in my basket until I got it home. When I opened it I saw that the bit where they joined in the middle was really weird. It was completely flat.

‘I was sceptical about eating it, but then I thought ‘waste not want not’ and I gave the other one to my mum.

‘We found it funny at first, but then realised it was still just a banana at the end of the day.’

Tom, who had studied climate change, did not know twins could occur in fruits as well as animals. 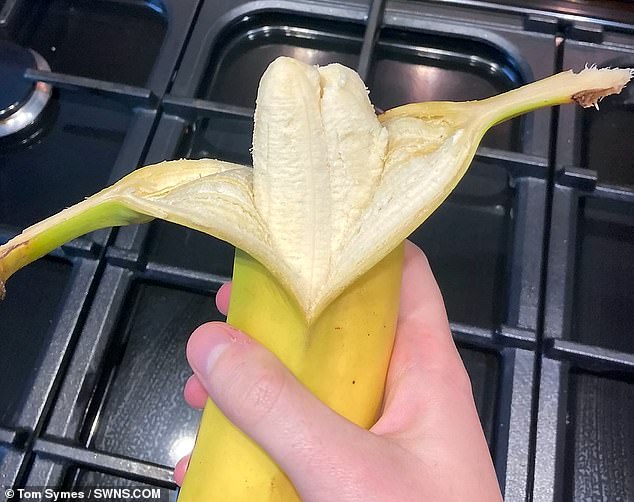 While one friend told him finding a double banana brought good luck, the unemployed student said he had had no such good fortune, and even had a seagull poo on his head during a trip to Brighton a few days later

He said: ‘I felt bad for not preserving it. Nature does weird things, I’m sure there’s weirder than this though.’

Tom had recently finished his masters degree in environmental governance and said he is currently applying for a job, so far without success.

He said: ‘I had been hoping for some luck in finding a job. After I opened the double banana someone told me it was good luck, but I didn’t get any good luck from it.

‘In fact, that weekend a seagull pooped on my head on a trip to Brighton. It was hardly the best of luck. But then again, that’s supposed to be good luck too.’

According to experts around five per cent of bananas can grow into ‘double fingers’ but most are discarded.

While double bananas are understood to be very rare, in extremely rare cases four finger bananas can grow.