Home » World News » Tears of joy from boy, 9, as he eats first McDonald's since lockdown

Now THAT’S a Happy Meal! Moment nine-year-old boy weeps with joy as he tucks into his first McDonald’s after months of lockdown in Singapore

This is the heartwarming moment a nine-year-old autistic boy broke down in tears after his mother brought him his first McDonald’s since the start of lockdown.

Mum Wati filmed herself showing her son Adam Bin Mohammad Irwan, 9, the McDonald’s takeout on May 18.

The fast food giant reopened on May 10 in Singapore after weeks of closure.

The video begins with Wati sat in her car. ‘Hello guys. I’m [getting] McDonald’s. It’s a surprise!’ she said.

She brings the food into the house and leads Adam into the kitchen where the food is spread out on the table.

At the outset Adam thinks his mum is playing a prank.

‘I thought you wanted to scare me,’ he said, before giving his mum a hug, who is quick to reassure him. 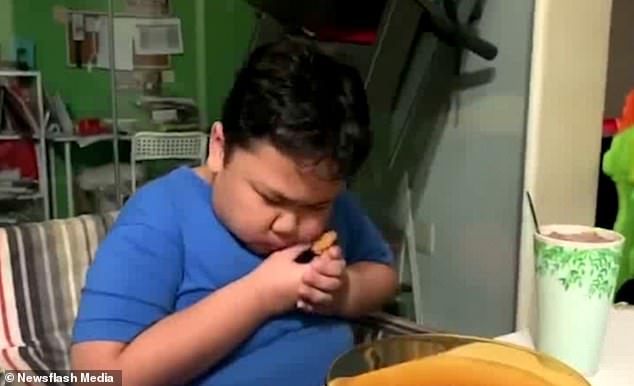 ‘I didn’t want to scare you! I wanted to surprised you. Look, what is it?’ she said

Adam is then filmed eating some chicken nuggets. At one point he puts one of the nuggets up to his face as if to hug it. 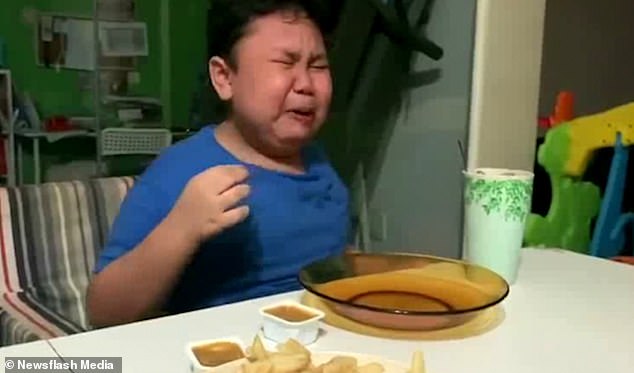 Mum Wati shared the video on Facebook. She added that McNuggets with fries and ice cream was Adam’s favourite meal

He is heard thanking his mother through tears, delighted to see his favourite meal and overcome by the situation.

Mum Wati shared the video on Facebook, where it has been viewed over 73,000 times, much to the delight of users.

She added that McNuggets with fries and ice cream was Adam’s favourite meal.

She also said that her son has sensory sensitivity and mild autism that caused his ‘overreaction.’