Shalom House is the toughest – and most successful – drug rehabilitation centre on the planet if you believe its founder, Peter Lyndon-James.

The program is tough. Conditions are tough. Lyndon-James is tough.

So what if you're a drug addict desperate for help, but you can't afford to pay? 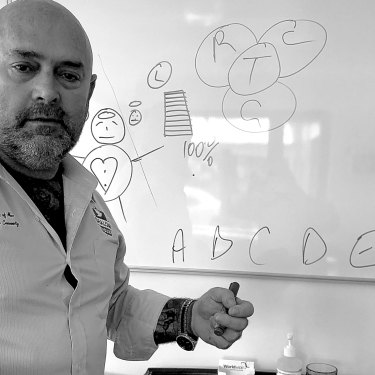 There's no free ride in his house, and Shalom House, with its various offices, workshops and residential dwellings scattered in Perth's picturesque foothills, is all his house.

Besides, why should society pay for the mistakes of drug addicts?

Since 2012 Lyndon-James has been putting his residents through their paces, but only if he deems an applicant worthy of his efforts.

The rehab founder estimates he accepts around one in 20 people who apply for the program, and he makes no apologies for making it hard to get in.

"If you're not 150 per cent serious about changing your life, I can't help you," Lyndon-James says.

Once accepted into what Shalom House's website refers to as the "strictest rehabilitation centre in Australia", the real tough stuff begins.

Residents hand over enduring power of attorney to Shalom House, and Centrelink payments cover their board and lodging.

There is absolutely no smoking – or drinking, or any illicit drugs, of course – new intakes won't see family members or children for at least a couple of weeks or so, every resident will be put to work, and the men will have their heads shaved and piercings removed.

"I'm trying to get my fellas into work; back into the community," Lyndon-James says.

"Do you think anyone's gonna hire a bloke with a mohawk and a hundred facial piercings?"

Up until about five or six months ago, Shalom House only took men as program participants.

Now there's a program and residence for women, and while Lyndon-James calls them his "princesses", and says he's a bit softer with "the ladies", Shalom House is no picnic for them, either.

'Good stuff comes out of this place'

It was this custodial term the current Shalom House resident credits as having saved her life. 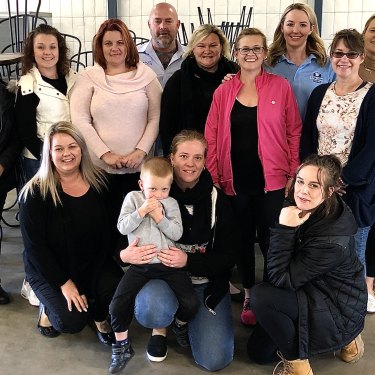 The Shalom House women's program includes couples and children, and started when Nicola – far right – refused to take no for an answer from Lyndon-James.Credit:Kate Hedley

Before her release, there was no women's program at Shalom, and if it wasn't for Nicola refusing to take "no" for an answer from Lyndon-James, there may never have been one.

"She wouldn't go away," Lyndon-James says.

"I told her I couldn't help, but she wouldn't leave. She's the one who started the ladies' program."

"Good stuff comes out of this place," Nicola says.

The women, who are separated from the men, live, cook, and work together.

During the day they sort rags and work on setting up the cafe they hope to open next year.

Every one of the seven current female Shalom House residents, has a backstory littered with drug addiction, domestic violence, brushes with the law, tragedy, and hopelessness.

Brittany, who has been clean for 11 years and who is helping the women set up the cafe, spent five years using meth and "benzos".

"I thought there was no way out, but there is absolutely hope."

Brittany said finding God set her free, and working alongside the women at Shalom – which was founded and is run on Christian principles, according to Lyndon-James – is what keeps her on the straight and narrow.

"I can never tell my story without God," she says.

As the newest sign-up for Shalom House's women's program, Krystal is still finding her feet. But the 33-year-old mother of three is full of hope. 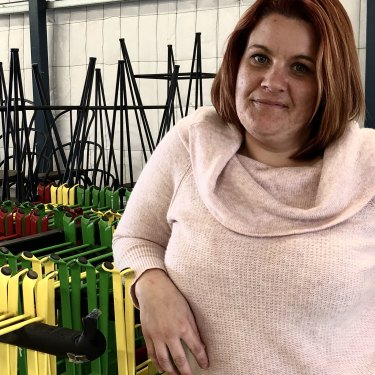 "That first two weeks with no contact with my kids broke me," she says.

"But if I wasn't here I'd be close to going back to jail."

Involvement in a ram raid and a burglary saw Krystal – who was injecting about $100 worth of meth each day – end up in prison.

"I was petrified," she says. "There was a lot of hatred in my heart."

Krystal acknowledges the program, and Lyndon-James himself, are tough, but "if we need it, we need it," she says.

She says she will stay at Shalom House for "as long as it takes", and if that means years, she's ready to commit.

"I just want to be able to have my family and kids be proud of me," Krystal says.

"It's been a long time since my parents have been proud of me."