Campaign spokesman Tim Murtaugh has confirmed the news, which was first reported by Politico magazine.

Stepien, who joined Trump at Tuesday’s first presidential debate, plans to quarantine until he recovers. 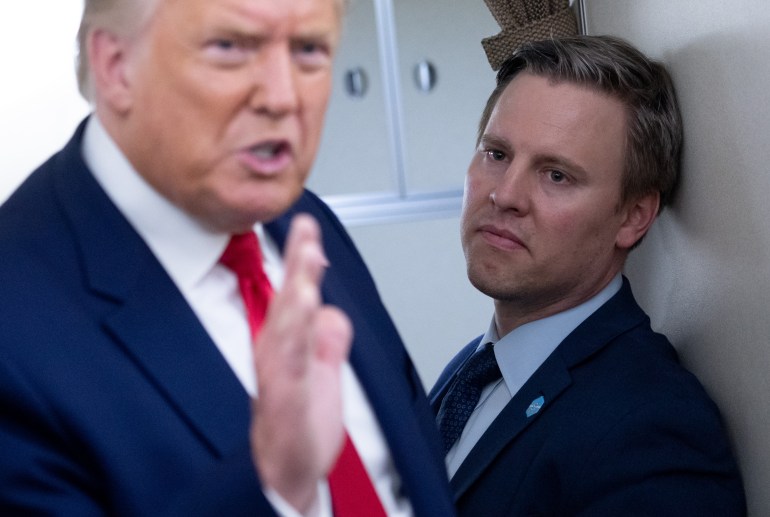 Trump is being treated with remdesivir and is “resting comfortably” after being admitted to hospital following his coronavirus diagnosis, according to his doctor.

“This evening I am happy to report that the president is doing very well,” Sean P Conley said in a statement released by the White House.

“He is not requiring any supplemental oxygen, but in consultation with specialists we have elected to initiate remdesivir therapy. He has completed his first dose and is resting comfortably.”

After being hospitalised with COVID-19, Trump tweeted that he thought he was doing well.

Kellyanne Conway, a former counsellor to Trump, said she had tested positive for COVID-19.

“My symptoms are mild (light cough) and I’m feeling fine. I have begun a quarantine process in consultation with physicians,” Conway tweeted.

Republican Senator Thom Tillis of North Carolina said he has tested positive for the coronavirus after taking a rapid antigen test.

He said he has no symptoms but will be isolating.

Tillis, who is up for re-election in November, is the latest person to be diagnosed with COVID-19 after attending the Supreme Court nomination ceremony in the White House Rose Garden for Amy Coney Barrett. Tillis was wearing a mask at the ceremony.

Peter Mathews, a professor of Political Science at Cypress College in California, said the president’s move to Walter Reed was significant, adding that it is important to know what plans are in place for any transfer of power.

“The fact that he’s been transferred to Walter Reed is a major development. He could have been quarantined in the White House and waited it out there. It could be they are being very cautious as he’s the president, but still, you have to take these things seriously and look at what is being put in place by this administration to make sure there’s a smooth transition,” Mathews told Al Jazeera.

“There’s two ways to go and there’s a precedent when President Ronald Reagan had to go in for surgery, he signed a letter saying he’s turning over power to Vice President George H W Bush for eight hours and then he would resume after that. And it worked out pretty smoothly. That’s one way, with the president voluntarily signs a statement.

“Another way is when the president is incapacitated, and it seems very clear that he is, the vice president has to lead and call the cabinet has to vote by majority vote to proceed to transfer of power to the vice president. When that happens, the president can challenge it if he’s available to do that, then it goes to Congress where it is voted by a two-thirds majority in each house to transfer the power over. So there’s a couple of options here and it all depends on how President Trump comes through right now as far as his physical health goes.” 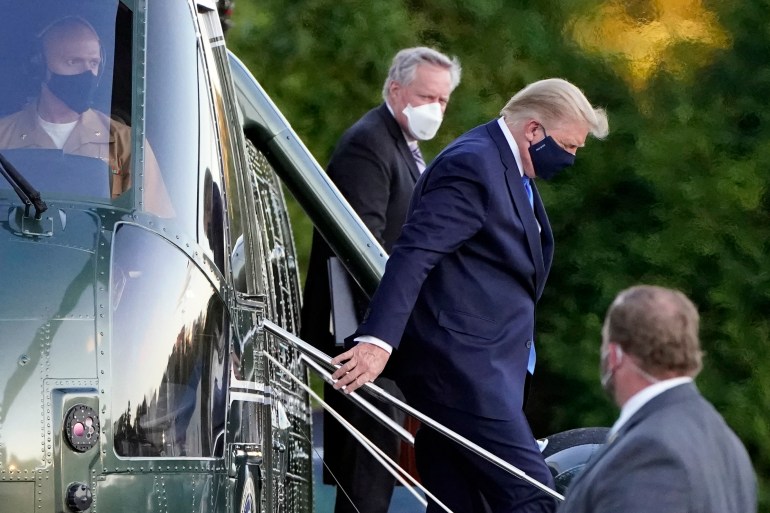 Esther Choo, an emergency physician and professor at Oregon Health and Science University, told Al Jazeera that Trump has a number of risk factors for severe COVID-19.

“He falls into several categories of people who tend to experience more severe symptoms of COVID-19 and to need hospitalisation, his age, his obesity, the fact he’s male – there seems to be a male predominance in severe disease and hospitalisation and ICU care and fatalities.”

And referring to Trump’s doctor revealing that the president has high calcium in his coronary arteries, Choo said: “He has some coronary heart disease. So he has more than one risk factor, but that’s across the population and how that plays out in an individual person, we never know.

“He also has some positive things – he doesn’t smoke, he doesn’t drink alcohol and also importantly, he’s extremely wealthy and privileged.”

North Korean leader Kim Jong Un sent a message of sympathy to Trump and his wife Melania, wishing they would recover from the COVID-19 illness, state media reported.

“He sincerely hoped that they would recover as soon as possible. He hoped they will surely overcome it,” the Korean Central News Agency reported. “He sent warm greetings to them.”

For all the key developments from yesterday, October 2, go here.