With under two months to go until the US election, the US President has seen his popularity suffer in the polls. The latest opinion surveys place the incumbent well behind his Democratic challenger Joe Biden setting the stage for the US to turn a wall of blue on November 3. 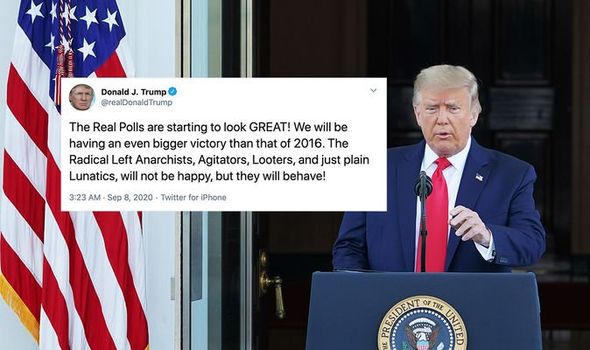 However, taking to Twitter, Mr Trump has dismissed polls which show him set to lose the US election.

Citing data which he did not share with his 85million Twitter followers, the US President claimed to have seen information which put him on course for a second term in office.

He said: “The Real Polls are starting to look GREAT!

“We will be having an even bigger victory than that of 2016.

“The Radical Left Anarchists, Agitators, Looters, and just plain Lunatics, will not be happy, but they will behave!”

According to aggregate pollsters FiveThirtyEight, the Democrat nominee Joe Biden is seven and a half points ahead of the incumbent.

A CBS/YouGov poll released at the weekend even showed Mr Biden to have a 10 point advantage nationally over his Republican rival.

Mr Trump has tipped to lose the 2016 election to Hilary Clinton before pulling off a shock result.