Home » World News » US fires map: When will the US fires stop? How long do wildfires last?

Raging wildfires across the United States have been burning for several weeks and now they have burned almost five million acres of land which is the same size as the US state of Connecticut. But when exactly will these fierce blazes stop and typically how long do wildfires last?

The wildfires have killed at least 36 people thus far and destroyed thousands of buildings and structures.

Record-breaking temperatures and a lack of rain have only exacerbated conditions.

The US President Donald Trump was branded a “climate arsonist” by his Democratic presidential competitor Joe Biden after Mr Trump dismissed concerns over climate change on Monday. 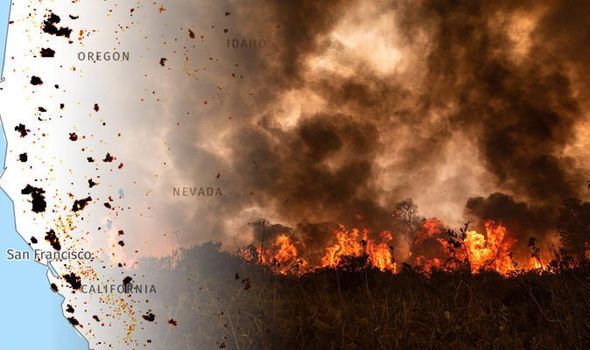 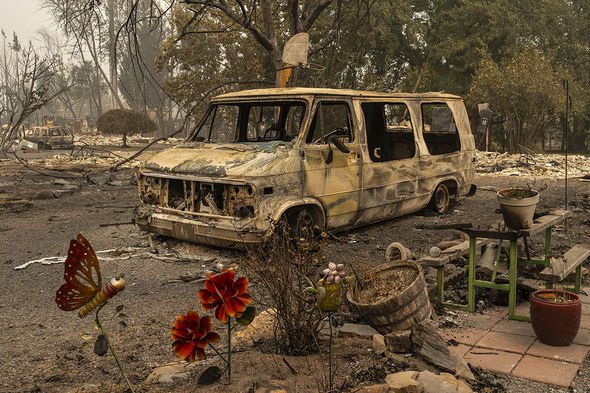 Mr Trump claimed the widespread destruction of wildfires was due to poor land management.

When asked by a reporter in California whether climate change was a factor in the massive wildfires, Mr Trump said: “I think this is more of a management situation.”

He also claimed that other countries had not dealt with the same level of forest fires, despite intense blazes hitting Augustral and the Amazon rainforest in the past year which experts have attributed to climate change. 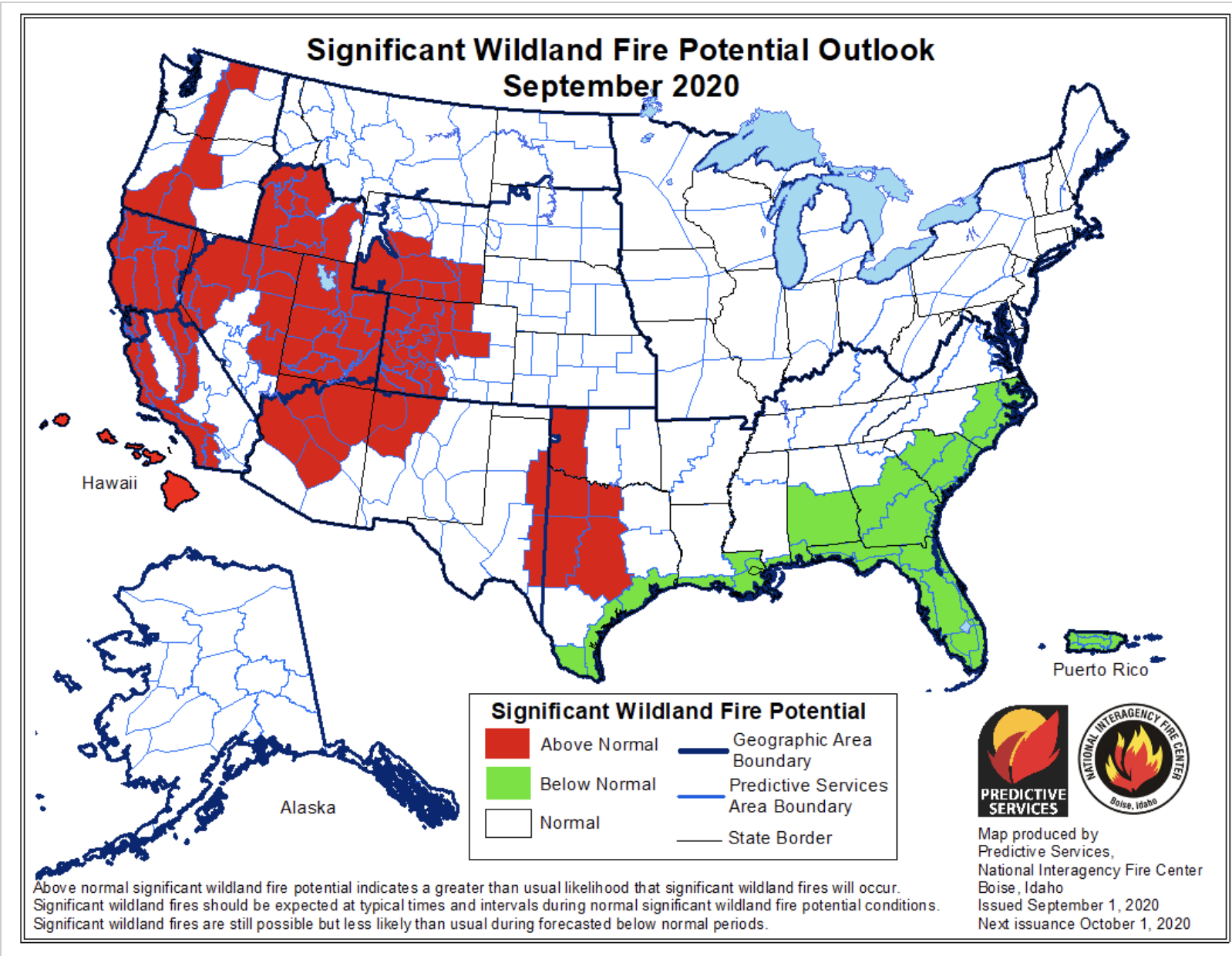 Californian Authorities claim at least 25 people have died since August 15.

These officials said the strong southerly winds and low humidity could add to the fire risk on Monday.

The US National Weather Service also issued a “red flag warning” for other areas of the West Coast, including Jackson County, Oregon, where the Almeda Fire has destroyed hundreds of homes.

DON’T MISS
End of the world: Hurricane Laura is a biblical sign of the end times [INSIGHT]
California fires: Why are fires in California getting worse? [EXPLAINER]
California Wildfire: Mass evacuations amid terrifying forest blazes [PICTURES]

In Oregon, the wildfires have burned almost 200,000 acres of land.

At least 10 people have been killed by the rampant blazes and many others are reported missing.

One child has died in Washington, where there were five large fires on Sunday.

In a statement on Friday, Washington Commissioner of Public Lands Hilary Franz said: “My heart breaks for the family of the child who perished in the Cold Springs fire. 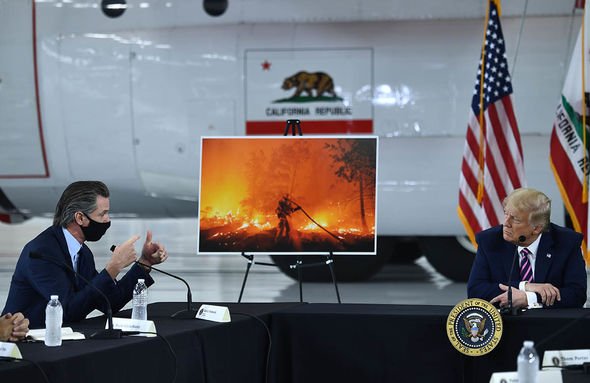 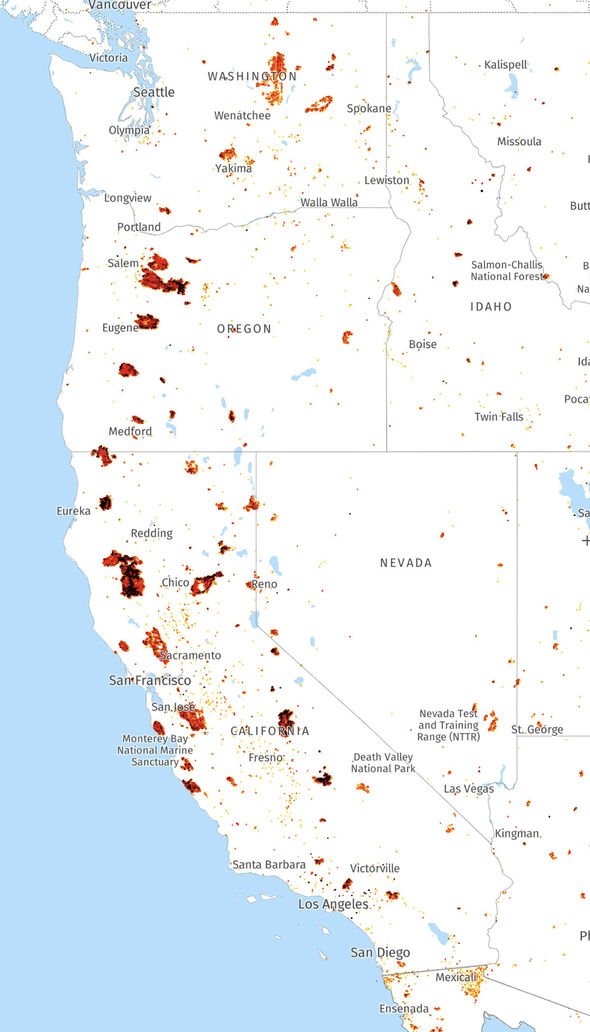 When will the US fires stop? How long do wildfires last?

The fire season in the US lasts from June through September.

The 2020 wildfire season promises to be particularly devastating because the summer was one of the hottest on record and drought conditions were widespread.

Firefighters tackle these ferocious wildfires by depriving them of one or more of the basic elements which enable a fire.

The fire triangle is a simple model to explain the necessary ingredients for most fires and is made up of heat, fuel and an oxidising agent, usually oxygen.

One traditional method used to stop US wildfires is to douse them with water and spray fire retardants.

Fire crews work in teams to clear vegetation from the land around a fire to contain it and starve it of fuel and the resulting tracts of land are called firebreaks.

Firefighters also endeavour to control burning by creating backfires to stop a wildfire.

This method involves fighting fire with fire and essentially removing undergrowth, brush and litter from a forest and therefore depriving it of fuel.