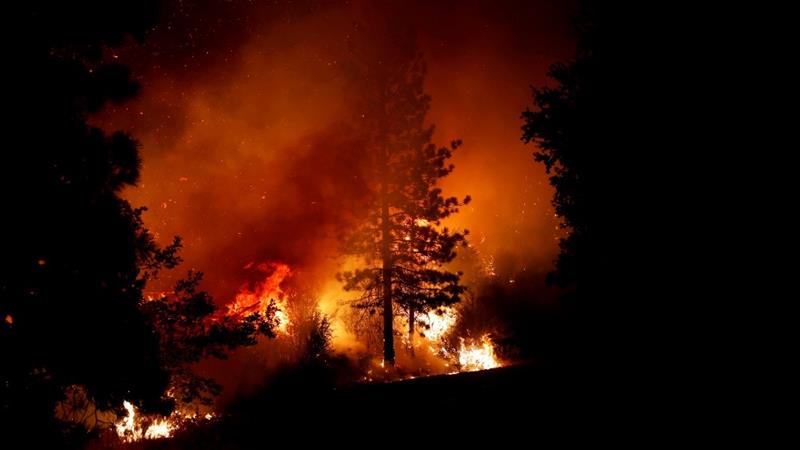 San Francisco, United States – As deadly wildfires continue to burn in the US, from the Pacific Northwest down to the California-Mexico border, LeRoy Westerling has a sombre projection for beleaguered residents and exhausted firefighters: “It’s going to get worse.”

Westerling, a climatologist at University of California Merced (UC Merced) who has spent more than two decades studying wildfires and the weather that drives them, said a lot of vegetation has yet to burn – and dead trees and brush provide fuel to the fires.

Climate change has made the current blazes more severe than in previous years, he said.

“The west is an arid region, and with climate change, a dry region is getting drier,” Westerling told Al Jazeera.

The deadly wildfires on the US West Coast have forced hundreds of thousands to flee their homes. In California alone, nearly 15,000 firefighters were working on Friday to contain more than two dozen major wildfires across the state.

Experts such as Westerling point to a combination of factors linked to climate change they say are spurring the blazes across the region and making it more difficult for emergency crews as they battle the flames.

The western US has seen less rain and snowfall in recent years, which means forests dry out quicker when the summer heat comes, Westerling explained, and that means the fire season is longer “because [the forest] dries out earlier”.

Westerling said the current fires are plume-driven, which means the flames are shooting up into the sky and may generate their own thunder. “That’s why we see big cloud formations over these fires. They’re creating [their] own weather system that enhances the spread of the fire.”

Allen Schauffler, lead anchor at Central Oregon Daily News who has covered wildfires in the area since 1987, said he has noticed fires worsen over the past decades.

“It just seems that fire seasons can start earlier, last longer and burn hotter than when I started. Also, more people have built more homes in the boondocks [isolated areas] and so there’s the potential for more property damage and more loss of life,” Schauffler told Al Jazeera.

He said this year’s fires in Oregon come after a period of drought and a string of high-desert lightning storms.

About 500,000 Oregon residents have been evacuated from their homes – more than 10 percent of the state’s 4.2 million people, the AP news agency reported on Friday, citing the Oregon Office of Emergency Management.

Schauffler said resources have been stretched thin as the state tries to cope with mass displacement and firefighters battle the blazes.

“It’s not just sheds and homes and gas stations going up in flames. It’s lives and towns and human connections and memories and culture,” he said.

CJ Martinez, a resident of Talent, Oregon, a small town in the south of the state near the border with California, said his apartment and truck were destroyed in the wildfires.

Martinez, who was caring for an elderly parent in California when the fire engulfed his home, said he was shocked to hear the news. “I had to tell my manager [and my] colleagues in real-time that I had just lost everything,” he told Al Jazeera.

“I just blurted out, ‘I just heard from my landlord that my truck burned and my apartment, there’s nothing left. I guess that means I’ve lost everything.’ I was numb.”

While the impact of the fires has already been devastating for so many people, Westerling said the burning season is just getting started – and strong winds that typically begin in late autumn are expected to make the situation even more difficult to control.

He pointed to 2017 fires in Santa Rosa, in California’s Sonoma County, which forced more than 200,000 residents from their homes and burned 149 square kilometres (57.5 square miles) of land, and the deadly 2018 fires in northern California’s Butte County as examples of how wind – and a lack of rain – can worsen things.

Some US politicians, such as California Republicans Devin Nunes and Tom McClintock, have baulked at the suggestion that climate change is making the wildfires worse. But the state’s Democratic Governor Gavin Newsom recently rejected that discourse.

“I quite literally have no patience for climate change deniers,” Newsom said during a news conference in the fire zone on September 8. “It’s completely inconsistent, that point of view, with the reality on the ground, the facts as we are experiencing.”

For his part, Westerling said a warming planet creates the dry conditions that propel the fires – and paints a bleak picture for the future. “The fire problem is not going away.”