Tropical Storm Zeta strengthened into a hurricane on Monday and was expected to bring torrential rains to the Yucatán region of Mexico, offering further evidence that not only has this hurricane season been extremely active, it has also been extremely wet.

Zeta is the 27th named storm of the season and the season is far from over: Storms could continue to form for another five weeks, and possibly longer. That is one shy of the record set in 2005, when 28 storms grew strong enough to warrant names.

The National Weather Service said Zeta could dump up to a foot of rain on some parts of the Yucatán by Tuesday. The storm was then expected to cross the Gulf of Mexico and hit the United States, where the forecast was for up to 6 inches of rain in the coastal Gulf States.

If the forecasts hold, Zeta will continue a pattern that has been playing out this year where much of the damage from storms has come not from wind but from water. And that destructiveness is linked to climate change.

Of the 27 named storms so far in 2020, only four have been major hurricanes, rated Category 3 or higher. (In 2005 there were seven major hurricanes, also a record.) Seventeen of 2020’s storms never got above tropical storm strength, with winds below 73 miles per hour, but heavy rains accompanied many of them, starting with Tropical Storm Bertha, which brought 14 inches of rain to parts of South Florida in late May.

All tropical cyclones pick up moisture as they develop and travel across the ocean. But global warming has raised average air temperatures, and warmer air holds more moisture. Studies of specific storms, including Hurricane Harvey, which brought four feet or more of rain to the Houston area in August 2017, have found them to be affected by human-induced climate change.

But greater moisture is only one way in which storms can be wetter. Global warming also appears to be causing some storms to slow down and stall so that over a given time they drop more rain over a smaller area.

Zeta was traveling at a fairly typical speed of about 10 miles per hour on Monday, and was expected to speed up as it approached the United States. 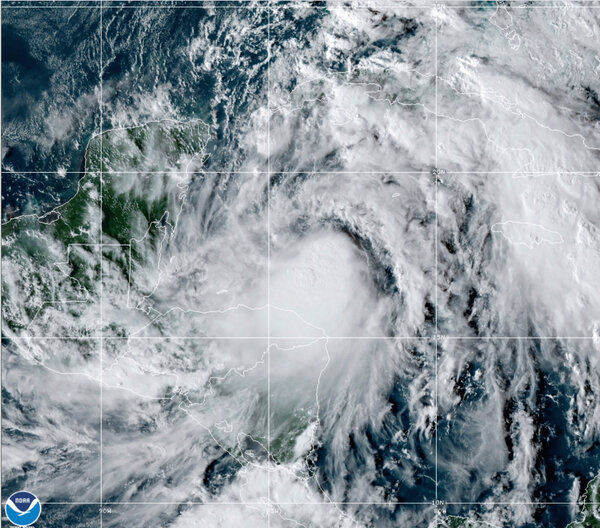 But last month, for example, Hurricane Sally brought staggering rain totals to Alabama and the Florida Panhandle, although it never was rated higher than a Category 2 storm and was weakening when it struck the coast. Climate change quite likely made Sally more dangerous by slowing it down to about 3 m.p.h. and feeding it more moisture, setting it up to pummel the region with catastrophic rainfall totals of more than two feet in some areas.

“When a storm moves slower, it lingers longer over the same location,” said Kimberly Wood, a geoscientist at Mississippi State University. “A rain rate of, say, an inch an hour — that’s not so bad if the rain only lasts 30 minutes. But if it lasts for half a day, that adds up quickly.”

Sally was not an isolated example of a stalling hurricane. “There is increasing evidence that storms are slowing down,” Dr. Wood said.

That evidence comes in part from a 2018 study that showed that hurricanes near the Gulf and Atlantic coasts were increasingly likely to stall. The study also found a clear signal of more local rainfall, said one of the authors, James P. Kossin, a researcher with the National Oceanic and Atmospheric Administration. “And it was associated with increasing frequency of stalled systems,” he said.

Researchers increasingly see a link between stalling of hurricanes and climate change. Rapid warming in the Arctic has reduced the difference in temperature between that region and the tropics, leading to a weakening and slowing of the jet stream and related winds that drive hurricanes’ forward movement.

Hurricanes also sometimes meander, Dr. Kossin said. Hurricane Harvey moved back and forth over the area, increasing the deluge. Sally was heading due west, parallel to the coast, on Monday when it made a sudden right-angled turn to the north early Tuesday.

Such movements may also be linked to slowing atmospheric circulation, Dr. Kossin said. “You won’t really get meandering until you get a slow storm,” he said. “They don’t go zipping around like go-karts.”

While Sally’s winds were not as intense as the strongest hurricanes — maximum sustained speeds early Wednesday were about 105 m.p.h., about 50 percent slower than a Category 5 storm — by lingering for longer, the storm may also have boosted storm surge, the wind-driven buildup of water that can quickly flood coastal areas, often with devastating results.

But storm surge can be influenced by many other factors, including the timing of tides and the shallowness of a bay or another body of water. In this case, Sally’s slow speed “contributed more to the extreme rainfall flooding than to the surge flooding,” said Rick Luettich, a professor at the University of North Carolina and a principal developer of the leading surge model used by forecasters.

Dr. Luettich said the storm’s surge was close to projections of about five feet. But another characteristic of some hurricanes that is linked to warmer oceans, the rapid strengthening of a storm before landfall, “gave the water a bigger push” than earlier forecasts called for, he said.

Hurricanes are not the only kind of storms affected by climate change, and not the only kind that can bring catastrophic flooding to the Gulf Coast or other regions. Record rain from a low-pressure system in August 2016, a large storm but one that did not rotate like a hurricane, led to floods in Baton Rouge, La. A gauge east of the city received 26.5 inches of rain in three days.

That storm prompted an attribution study, research that tries to determine the extent, if any, of climate change’s influence on an extreme weather event. It found that climate change had increased the likelihood of such a storm along the Gulf Coast in any given year by 40 percent since 1900. In the current climate, there is a 3 percent chance in any given year of a similar storm.

“The risk of extreme precipitation events in this region has gone up,” said Sarah Kapnick, a researcher at NOAA’s Geophysical Fluid Dynamics Laboratory in Princeton, N.J., who worked on the study.

“There’s a basic theoretical understanding underlying all of this,” Dr. Kapnick said. With warming “you get more water vapor in the sky.”

“So when you get these storms, be they hurricanes or summer storms, they have the potential to hold more water in them,” she added. “And that water has to go somewhere.”