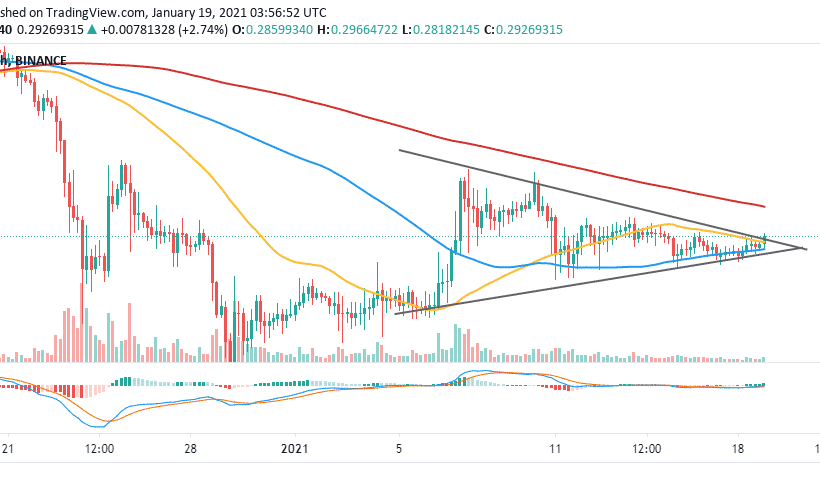 Ripple is still trading under $0.3 despite the massive bullish signals as covered on Monday. Whales are currently streaming into the project mainly due to the prevailing low price and the improving technical picture.

The cross-border transfer token was dealt a massive blow after the United States Securities and Exchange Commission (SEC) filed a lawsuit against the issuing company, Ripple Labs Inc., and its top executives. The lawsuit aims to find Ripple guilty of breaching the Securities Act by selling unregistered tokens.

XRP tumbled massively following the lawsuit and has spent the last four weeks fighting for recovery. At the time of writing, XRP is trading at $0.29 while battling the uphill battle at $0.3.

The 4-hour XRP/USD chart shows that the price has stepped above the 100 Simple Moving Average and the 50 SMA, which is a huge move for the token. Moreover, a symmetrical triangle pattern has come into the picture, suggesting that the expected breakout above $0.3 will be so massive that XRP may rally to $0.48.

Symmetrical triangle breakouts have precise targets measured from the highest to the lowest price points within the pattern. The distance found is then added to the breakout point.

Meanwhile, the Moving Average Convergence Divergence or MACD adds credibility to the improving uptrend. The indicator follows the trend of an asset and is used to show the strength of the momentum. As the MACD crosses into the positive territory, Ripple gets ready for the massive liftoff.

Note that a breakdown from the triangle pattern would be of the same magnitude as the breakout to $0.48. Therefore, some of the critical support levels at 100 SMA, $0.28, and $0.27 must hold to avoid potentially massive declines.