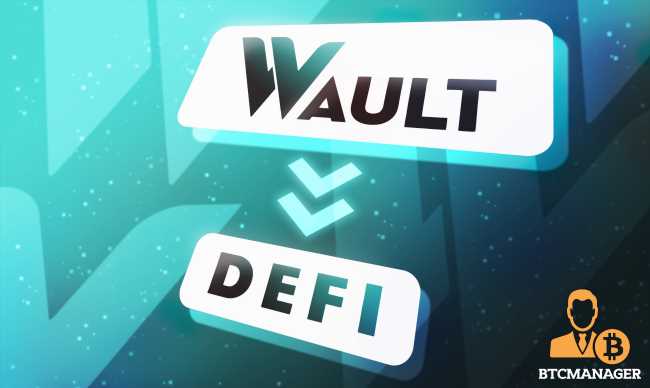 Decentralized Finance, or simply DeFi, is all about simplicity, end-user control, and the promotion of financial inclusion.

It operates parallel to the red-tape constricted legacy systems, and developers are doing everything in their power to port over viable projects to a decentralized base layer.

Wault Finance Simplifies the Complexities of DeFi for Retail Users

Of the many DeFi protocols, Wault Finance stands out.

First launched on Binance Smart Chain (BSC), Wault is now cross-chain, compatible with other EVMs like Polygon where it has also since launched.

According to the project’s creators, their overarching objective was to ease adoption and use by bringing together all of DeFi’s exciting features in an intuitive and easy-to-use platform.

DeFi on Ethereum alone commands over $55 billion USD. If it were a blockchain project, it would be the most active and valuable. In the burgeoning BSC, DeFi projects manage over $27 billion at the time of writing.

PancakeSwap may be ahead of the pack, but Wault Finance has claimed its spot in the top-10 with a market capitalization of $30.6 million and a TVL of $360 million, as Defistation data shows. However, Wault Finance’s TVL has reached as high as $1.5 billion at one point. In Polygon, Wault Finance is the fifth most valuable project and more active than SushiSwap—which is quite a feat. As of July 6th, there were over 15k WEXpoly holders.

This is an impressive performance especially considering Wault Finance is a relatively new project, launching in Q1 2021. Outside of transaction fees which is one of the many reasons why many projects shifted from Ethereum to BSC and Polygon, Wault Finance has a suite of products. Within the platform, users can access staking, yield farming, trading, and investing all in one place.

These services are accessible via Wault Finance’s three main product offerings. They are:

WaultSwap is a DEX—but not a typical swapping protocol. The platform is differentiated because of its low cost and multi-chain element. Accordingly, users can easily and quickly swap tokens in the BSC and Polygon ecosystems cheaply. In fact, at .2%, WaultSwap has the lowest trading fees of the major DEXes on both blockchains. What’s more is 100% of protocol fees earned from trading are shared with token holders through buyback and burn of the WEX and WEXpoly tokens(Polygon version of WEX token).

The DEX is non-custodial, meaning users don’t have to reveal their information. With hundreds of millions of dollars in liquidity, Wault’s low price impact is also comparable to the top DEXes. Typical of other DEXes, users can be liquidity providers in supported pools in Polygon and BSC, getting rewarded with high APYs, reaching into the hundreds.

The second product offering, Wault LaunchPad, is where DeFi projects can crowdfund and launch. It launched in March 2021, and already, several projects have carried out their IDOs, returning over 10X to investors. Holders of Wault Finance’s WAULTx tokens get early access to potential projects by staking their WAULTx tokens before investing.

The third product, Wault Locker, is a dApp, that acts as a vault where users can lock their funds and liquidity for a specific period. It is beneficial for projects who want to build trust with their followers by locking up team or liquidity tokens. To access the Locker, users only pay 0.2 percent in service fees.

In their quest to serve retail DeFi users, Wault has been striking deals with projects and listing at various exchanges, the latest being at Gate.io and MXC. The team is also continuously building, reaching milestones as per their roadmap.

Wault Finance has recently dedicated 1 million USD for a Moon Fuel Grant Program to stimulate the development of its ecosystem.

This grant is for new projects that apply and consequently list on Wault Swap. Funds would be to offer support for various marketing and technical activities such as code auditing.

Also, within the first 72 hours of listing and trading, Wault Swap will channel 100 percent of trading fees to buyback and burn the token, increasing scarcity, therefore boosting prices during the sensitive launch period.

There is also the WPool program which has attracted 13 partner projects in a short time.

All in all, Wault Finance is a DeFi protocol that is growing fast, certainly one to watch for investors and users alike.