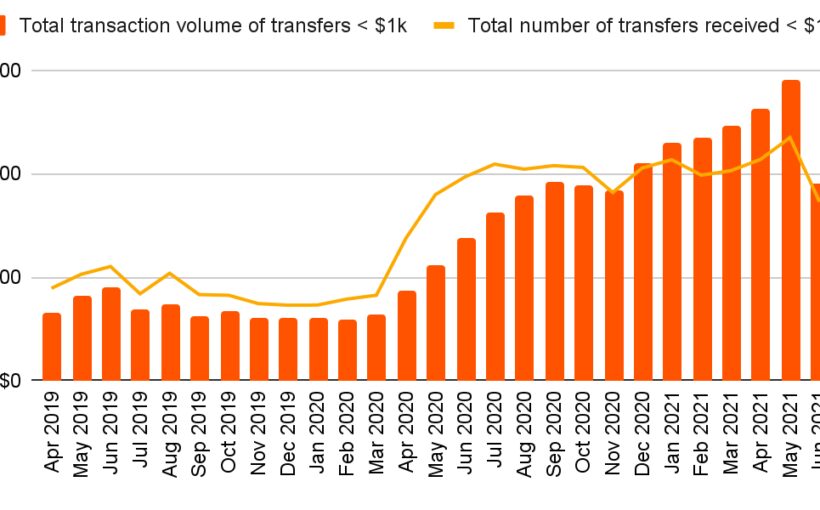 The continent of Africa has received $105.6 billion worth of bitcoin and other cryptos within one year between July 2020 and June 2021.

The vast majority is for remittances according to Chainalysis, which tracks blockchain crypto movements to get insights based on data analysis.

The continent has received some $100 million a month in crypto as pictured above, withChainalysis stating “cryptocurrency remittance payments have grown consistently since April 2020.”

“Informal P2P trading is huge in Nigeria on Whatsapp and Telegram. I’ve seen young people and businessmen in these groups carry out transactions for several millions with popular OTC merchants,” says Adedeji Owonibi, CEO and founder of a Nigerian blockchain consultancy company Convexity.

Escaping fiat inflation is one reason for the growing crypto adoption, with such inflation leading to many African countries imposing capital controls of as low as $500.

“If you’re working with a partner in China to import goods to sell in Nigeria or Kenya, it can be hard to send enough fiat currency to China to complete your purchases. It’s often easier to just buy bitcoin locally on a P2P exchange and then send it to your partner,” says Artur Schaback, COO and cofounder of Paxful.

All this suggests bitcoin is becoming a bigger and bigger part of Africa’s economy, a continent that often lacks banking infrastructure as we know it.

Smart phones have proliferated however, with that sufficient to open access to an entire global economy through bitcoin and other cryptos to the point now the continent is receiving $100 billion, a significant sum for their economy.