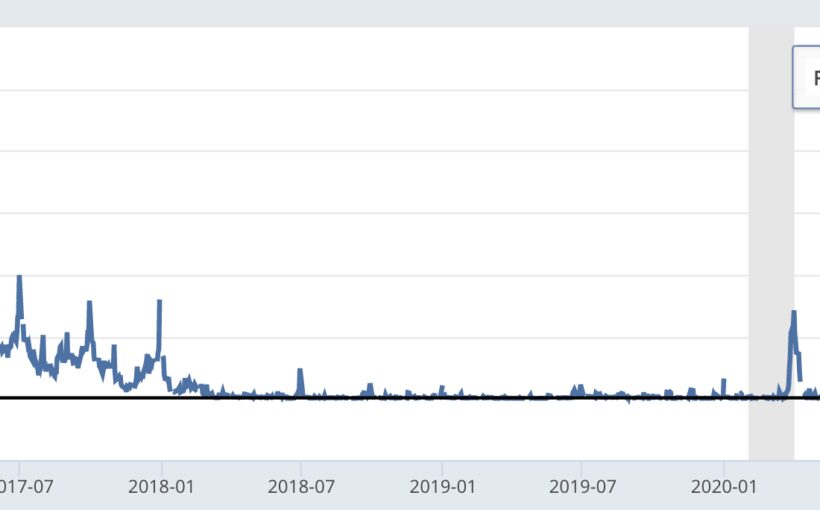 There are numerous reasons, including potentially the fact money parked at the Fed in Reverse Repurchase Agreements has crossed $1 trillion for the first time.

Reverse repos are short term purchase agreement where banks give cash to Fed in return for bonds with the Fed currently paying them 0.05% interest during the duration of that agreement.

The big question is why this is now finding so much usage with the dominant explanation being that there’s just too much cash flowing around in the system.

Banks don’t know where to park it and apparently they have no better place than a facility which pays 0.05% in interest, with the stock market plunge in China potentially being one contributor to this surge (pictured).

An estimated $1 trillion has been lost in value in Chinese stocks trading in Asia and USA with that money potentially now temporarily parking before finding a new investment.

Some may have gone towards bitcoin or are on their way, but some suggest this reverse repo surge may continue, potentially hitting $2 trillion.

Deposited cash for banks is a liability so they try and balance by turning that liability into a bond asset, but it may be demand for bonds is now so high that it overspills to repo reserves.

That still however implies people are holding too much cash instead of investing it, with the velocity of money continuing to plunge:

That’s while stocks have added another $26 trillion globally, or 30% of its previous all time high, with house prices increasing as well, as are commodity prices.

Yet there’s still so much cash in the system, it’s happy to park at almost zero percent in interest while inflation reached 5.4% in June.

One big reason may well be because wages are not quite keeping up, with all the tech giants announcing record profits waiting for somewhere to invest.

All of that suggests asset prices will go higher to readjust for the new fiat supply with Fed maintaining the emergency measures while China is seemingly moving towards monetary easing.