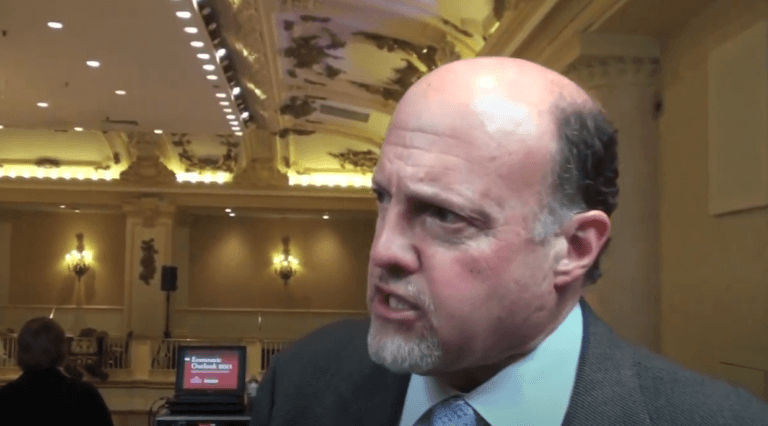 How Jim Cramer Got Into Bitcoin

Well, judging from Cramer’s comments in a recent interview, it appears that Cramer may have invested more money in Bitcoin.

The interviewer was Pomp, who had invited Cramer to appear for the second time on his podcast (Cramer’s first appearance on the Pomp Podcast was in episode #383, which was released on 14 September 2020).

Below are some highlights from Cramer’s comments about Bitcoin during this interview (episode #517 of Pomp Podcast).

The interview started with Cramer thanking Pomp for making him “a ton of money”:

“I did exactly what you told me… I went and called my CFO and I said ‘listen, I just talked to this guy Pomp’… And I said [that] I want half a million dollars in this [Bitcoin]… you can buy it over a couple of days, but I don’t want any longer that because this guy is the authentic deal… I want to thank you… because it happened… it happened just like you said. It also happened much faster than you said… I am very grateful.“

Cramer then talked about his disappointment with gold:

“I have for years said that you should have gold… but gold let me down.“

Pomp then asked if Cramer thinks people are going to “drop gold and buy Bitcoin.”

However, perhaps, the most interesting part of the interview was near the end when Cramer talked a little abut his “boom thesis.” In short, he said that in the U.S. he expected to see in the second half of 2021 the kind of economic boom that we witnessed in the 1990s, and that he believes this will be even “better” than what happened in 1946 (which was the start of a massive economic expansion that ended in 1953).

As for how his boom thesis relates to Bitcoin, Cramer said:

“If my boom thesis is true… you are crazy not to have Bitcoin… I don’t care if it is $70,000 right now. I’d be saying the same thing… The boom means Bitcoin.”

On March 3, Cramer talked on CNBC’s “Squawk on the Street” about the upcoming Post-Covid that he expects to see in the U.S. in the second half of 2021:

On April 15, Cramer revealed, while talking to CNBC’s “Squawk on the Street” co-host David Faber, that as the Bitcoin price has been going up over the past few months, he has been taking profits by selling some of his BTC holdings.

“I’ve decided to become an apostate… After you and I had that discussion of no-one ever selling Bitcoin… so I bought a lot of Bitcoin at $12,000… I know people gonna be angry me, but I paid off a mortgage yesterday with it. I don’t know. Is that dangerous, David? I actually sold some… from from the chart, David, I may be the only natural seller, but it was so great to pay off a mortgage… it was like phony money paid for real money, what do you think?“

He then excitedly provided further details:

“I sold all the way up… then I took that money… and David I paid off a mortgage, which was real money I got from a bank… so I now own a house lock, stock, and barrel because I bought this currency. So, David, I don’t know, I think I won.“

Cramer’s Says He Sold Most of His Remaining Bitcoin Holdings

Cramer’s latest comments about Bitcoin were made yesterday on CNBC’s “Squawk on the Street”, where Cramer said:

“Tom DeMark, who’s been the best. is saying… it’s got to hold $30,000, but there’s two headwinds, and one is I just think that when the PRC goes after something, they tend to have their way…. but then I keep thinking about the FBI and ransomware and what happened with Colonial [Pipeline].

“We know [about] Colonial. How many have we not found out [aboiut]? We know that then people must be paying ransomware. So how about if the FBI goes to see the IRS and goes to the Justice Department [and] says ‘we can’t control this, then they refer to the Federal Reserve. Federal Reserve doesn’t want Bitcoin. Then they decide… no more ransomware…

“Instead of thinking that Bitcoin should go up if it’s outlawed or if it’s made tougher to be mined, Bitcoin goes down as if people are saying I gotta redeem… How else could it be going down?… It should obviously go up unless there is a worldwide redemption… and Tether is deeply involved… and they have not really told us what kind of commercial paper backs them and yet they are one of the largest buyers and yet I can’t find anyone, any desk, that does business with them.

“So I’ve got the Tether weak link. I got what the heck was going on that this thing’s going down if it can’t be mined and I’ve got the possibility that Colonial isn’t the only ransomware. I’m saying that this is not going up because of structural reasons. And I know Tom DeMark… says ‘$30,000 intraday, look out, gotta hold, may be the buy point’… I’m not going there. Sold almost all my Bitcoin. Don’t need it.“