Home » Bitcoin » Cryptos Bounce Back For An Early Lead In Q4 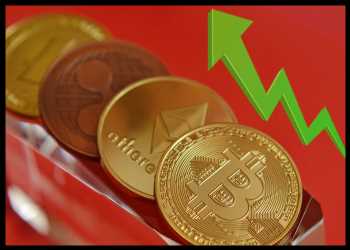 Crypto world seems to have ushered in the fourth-quarter in all fervor and valor. Most cryptocurrencies have rallied after Federal Reserve Chairman’s comments that they had no intentions to ban cryptocurrencies. The relief rally has invigorated the cryptocurrencies after a rollercoaster movement in much of September.

If market capitalization is the best big-picture barometer of the resilience and energy in the crypto space, the 11 percent surge in a matter of few days speaks volumes for the escalating investor enthusiasm. The market capitalization of all crypto assets including stable coins and tokens has increased around 11 percent from $1.9 trillion as on September 30 to $2.11 trillion currently.

Market leading Bitcoin (BTC) has seen its market capitalization swell from around $0.82 trillion at the end of September to $0.90 trillion now, implying market dominance of 42.5 percent and recording a growth of 9.4 percent in the new month. Bitcoin is currently trading at $47,649.88, registering a decline of 0.42 percent in the past 24-hours, but a growth of 8.75 percent over the past seven days.

Our customary analysis of the top-15 coins ranked as per market capitalization* shows that the ushering in of the new quarter has been not just market cap accretive but also hierarchy disruptive. 10 coins among 15 have undergone a change in rankings since our earlier review released last week.

The biggest disruption has been Binance Coin’s (BNB) clinching the position of the third most valuable cryptocurrency, consigning Cardano (ADA) to slot 4. BNB has surged more than 20 percent in the week in sharp contrast to Cardano’s (ADA) weekly decline of 1.47 percent. Cardano has slipped around 3 percent in the past 24 hours amidst reports that its traders in Japan are under scrutiny for tax evasion.

Likewise, “Ethereum killer” Solana (SOL) has broken into the top-5, relegating XRP (XRP) down by a notch to rank 6. With a 17 percent gain in prices over the past week, Solana’s market capitalization has increased to $49.9 billion, overtaking XRP’s $48.15 billion.

Solana’s rally is widely attributed to its cheap price, high speed and the resultant traction in DeFi and NFT ecosystems. Recent institutional investor interest too has contributed to its rally.

XRP shed 0.21 percent in a day and gained 7.61 percent in a week amidst a legal tussle between Ripple Labs and SEC that began almost a year ago on the issue of Ripple’s XRP cryptocurrency’s registration as a security.

In similar fashion, Terra (LUNA) advanced to 9th position pushing Avalanche (AVAX) by one step to the 10th rank. LUNA had on Sunday climbed to an all-time high of $46.09 and is currently trading at $45.81 amidst its recent upgrade to the Columbus 5 version that inter alia assured Inter Blockchain Communication (IBC) protocol integration, increase in throughput, enhanced security protection etc.

Likewise, Algorand (ALGO) moved up to rank 11 and pushed down Litecoin (LTC) to rank 12. Algorand had recently launched the Algorand Virtual Machine that promises transaction finality, enhances decentralized app scalability as well as allows for the development of complex smart contract-based applications in DeFi, the NFT marketplace, web etc.

Polygon (MATIC) also managed to move up the ladder, advancing to the 14th rank, pushing Cosmos (ATOM) to the 15th spot. Polygon (MATIC) prices jumped more than 13 percent over the past week after the launch of a $1 million mining program to build liquidity on Augur Turbo. Augur Turbo is a decentralized predictions platform with predictions spanning sports, politics, current events etc.

Among this top-15 league, almost all coins have gained over the past week, with the exception of Cardano (ADA) that has declined around 2 percent as well as Cosmos (ATOM) and Avalanche (AVAX) that have shed more than 3 percent.

The crypto world is increasingly becoming a marketplace of survival of the smartest, cheapest, safest and fastest. Today’s rally can be tomorrow’s dominance only if scalability, technology and usefulness blend with the attributes of cost, speed and security in a durable fashion.