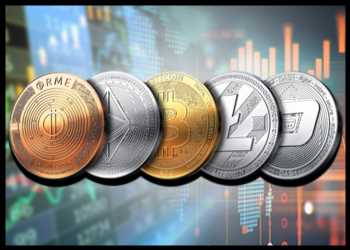 Cryptocurrencies rallied on Wednesday, despite a predominantly negative sentiment at the stock markets. Wall Street futures are trading in negative territory and so are the major European benchmarks. The Dollar Index strengthened to 102.36 whereas gold is hovering near $1853, in lackluster trade ahead of major macro-economic events. The European Central Bank would announce a review of its monetary policy on Thursday. The U.S. CPI data release on Friday is expected to set the tone for the Federal Open Market Committee meeting on June 14 & 15. Meanwhile, the Reserve Bank of India, hiked the key repo rates by 50 basis points earlier in the day.

Overall crypto market capitalization has increased by 2.95 percent to $1.25 trillion versus $1.21 trillion on Tuesday, $1.6 trillion a month ago and $1.5 trillion a year ago.

Open Interest in the Chicago Mercantile Exchange’s Bitcoin Futures dropped to 10990 on Tuesday, versus 11340 on Monday, and 11473 on Friday.

Open Interest in the Chicago Mercantile Exchange’s Ether Futures dropped to 3072 on Tuesday, versus 3341 on Monday, and 3302 on Friday.

LINK surged more than 13 percent in the past 24 hours following the publication of an updated staking roadmap. The staking is expected to enable a system of rewards and penalties that would incentivize the network’s proper operation.

Major cryptocurrency exchanges in South Korea viz Upbit, Bithumb, Coinone, Korbit and Gopax have delisted Litecoin (LTC) citing privacy concerns. According to Upbit exchange, The Act on the Reporting and Use of Specific Financial Transaction Information prohibited anonymous transactions. The delisting follows Litecoin’s MWEB upgrade earlier this year that made LTC transactions private, hiding some of the key identifiers.