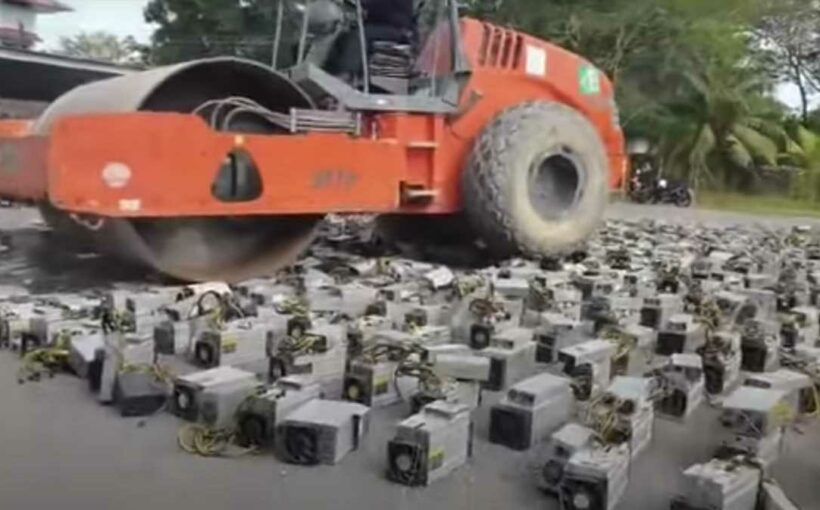 Malaysian authorities have thrown $1.2 million down the drain by engaging in a dramatic spectacle of comedic display in steamrolling more than one thousand bitcoin asics.

This is the first time such action has been taken as far as we are aware, with it unclear whether the authorities in the Miri city of 300,000 people quite knew what they were doing.

A video shows a steamroller going over the asics, presumably to turn them into granite? The asics are then a bit more flat with it unclear whether at the very least they sold them for scrap.

We presume they didn’t even know these are very valuable ‘computers’ with just one of them going for $10,000. They may have thought instead these are somehow bad electricity stealing devices and steamrolling them will teach them a lesson.

Because that’s one way of viewing these specific asics which were used to mine bitcoin through stolen electricity with eight people arrested.

“A total of six people have been successfully charged under Section 379 of the Penal Code for electricity theft and have been fined up to RM8,000 and jailed for up to eight months,” Miri police chief ACP Hakemal Hawari said on Friday.

They apparently stole some $2 million worth of electricity from Sarawak Energy Berhad (SEB), more than half of which could have been recouped by auctioning these asics instead of playing Mr Bean.

There’s no suggestion they seized any bitcoins either, probably because they have no clue what bitcoin is, let alone how to seize it.

A more informed authority would have probably found eth as well as other cryptos, all of which in combination would have paid back more than the stolen electricity, and so in the end the country would overall benefit.

But here instead they steamroll these bad boys, which is a bit peculiar because Malaysia is now fairly rich with a GDP of $360 billion for 30 million people, but they’re still a developing country below European levels.

Bitcoin in addition is perfectly legal there, classified by courts as a commodity, so this isn’t some gov policy but a police department coming across a new thing and so not quite knowing what to do with it.

Something that gives us a very vivid display of the increasing bitcoin adoption in the region as presumably these police boys will now realize they burned a lot of money, and so get to learn just what is bitcoin in the process.