Home » Bitcoin » No All Time High For Bitcoin Searches 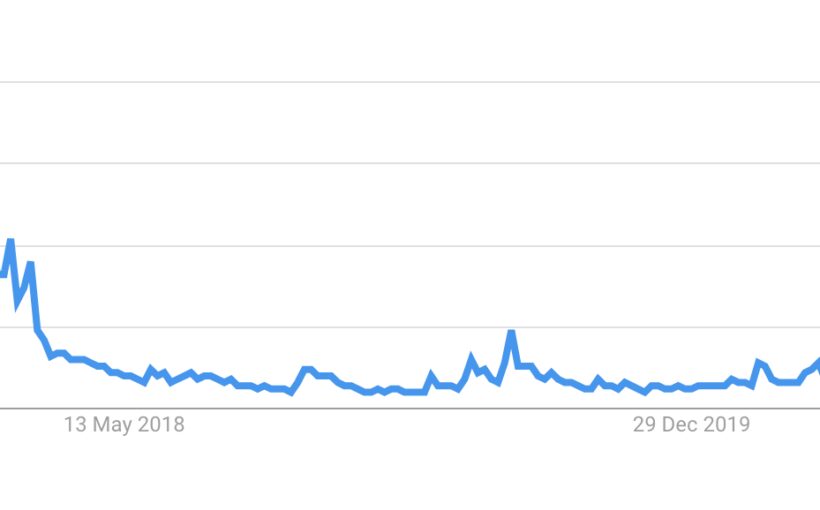 Despite bitcoin’s price at more than 2x its previous all time high of 2017, and at one point reaching 3x, Google searches for bitcoin have barely reached half its 2017 peak.

Currently bitcoin is at about 15 points out of its 100 peak in 2017, and throughout its rise since December 2020 it has reached only 53 at its highest.

Curiously however, the chart from Google trends as pictured above mirrors a bit the 2017 trajectory prior to it going parabolic in November of that year.

We can see it for example peak at 17 in May and August of that year, to drop at 9. This year it ‘peaked’ in Januaryand May, with it then going down.

Past performance obviously doesn’t predict future performance, so it remains to be seen whether this year it will also turn and go parabolic within a period of about two weeks.

But it may be that most Americans now know about bitcoin so they don’t have to google it to learn about it, and yet searches are still very voluminous even at this lower point, with bitcoin ranking significantly above eth for example.

So people that already know bitcoin may be searching about perhaps bitcoin news or exchanges or other activities. While newer ethereum may have more searches concerning what is eth, hence why it has significantly surpassed its previous all time high.

The recent peak here is in May when eth reached the pretty wow price of $4,400. A recent peak that may also be due to the wow-ness of its price, something that arguably bitcoin has not quite reached yet because $20,000 v $60,000 is not really quite wow.

$200,000 would be, and if it gets there, there most probably will be a new all time high in searches and perhaps even a parabolic one as that would be a very wow event.

But for now, it looks like the world is not yet very surprised. Which may mean bitcoin has still significant room for growth to at least the 2017 all time high for searches.