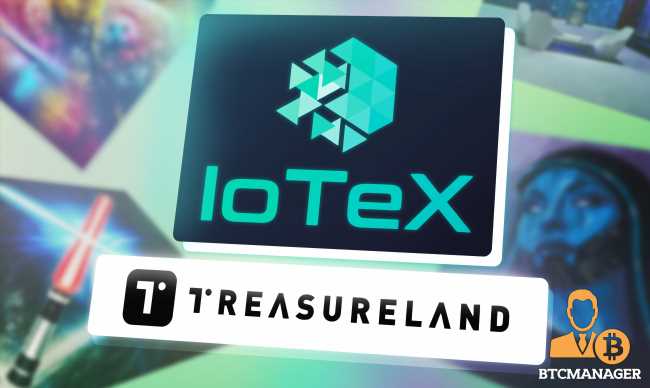 The NFT market has already seen significant growth this year. In Q3 2021 alone, the non-fungible token market trading volume surged seven-fold to nearly $11 billion from the previous quarter. The IoTeX–Treasureland partnership will boost the NFT market to new all-time highs in 2022.

“Treasureland is pleased to announce it has sealed a strategic partnership with IoTeX,” the NFT marketplace startup said in a public statement. “Both platforms will proactively join forces to push the growth of the NFT sector through interchain NFT transactions, NFT minting, and other use cases.”

Treasureland Market has built a unique frictionless trading platform that enables users to mint NFTs with just a click and have fun mining for gold in their marketplace. Users can also easily buy, sell, auction, and mine NFTs. The project’s ultimate goal is to “become the eBay” of the blockchain space.

“As such, IoTeX is the perfect ally for Treasureland’s multi-chain vision,” says its statement. The partnership includes both projects collaborating “to connect the IoTeX blockchain so that consumers may begin trading native IoTeX NFTs on the Treasureland marketplace.”

Treasureland —currently ranked as the largest NFT market on Binance Smart Chain by DappRadar— is on a mission to create the universal NFT marketplace where users can exchange non-fungible tokens from every blockchain network in the space.

Art Malkov, IoTeX Head of Growth, said both projects are paving the way for a more significant NFT market surge in 2022 by leveraging on each other’s uniquenesses and strengths.

“IoTeX is paving the way for a trillion-dollar machine economy in which users, not corporations, own their data, their smart devices, and the value they generate,” he said. “We have continuously delivered innovation and technology. Our blockchain is the fastest and most scalable with some of the lowest transaction fees in the space.”

“IoTeX has grown its ecosystem exponentially this year from a couple of dozen projects to nearly 130,” said Malkov. “It is currently one of the fastest-growing blockchain and cryptocurrency ecosystems worldwide.” Malkov praised Treasureland and said IoTeX is thrilled to see this burgeoning NFT marketplace working with the Silicon Valley, MachineFi focused company.

“You can expect more groundbreaking progress from IoTeX in 2022 as each year we have proven with facts, not promises, that we are a leader in blockchain technology,” Malkov concluded.