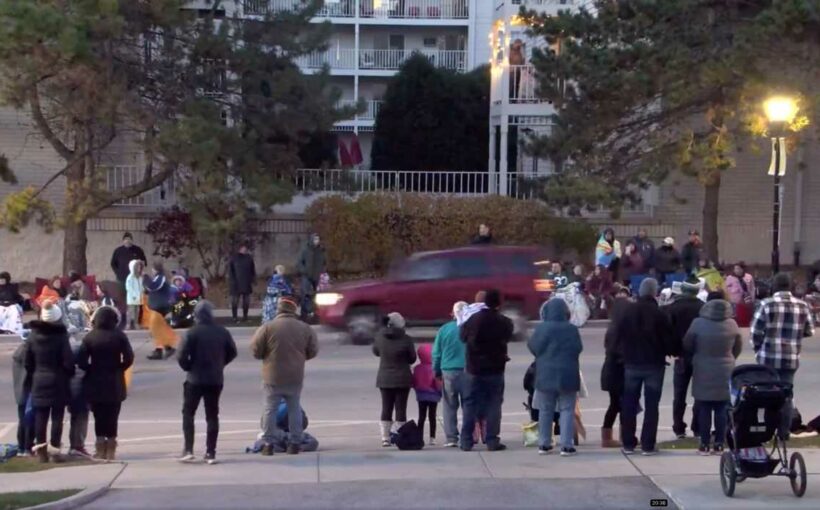 A joyous Christmas parade in Waukesha, Wisconsin, turned into a scene of deadly horror when a red SUV plowed into a crowd on the city's Main Street late Sunday.

At least five people were killed and more than 40 others were injured, according to officials in the suburban Milwaukee city. Those numbers may change as new information comes to light, they said.

Darrell Brooks, 39, from Wisconsin, was identified as a person of interest taken into custody Sunday night and is being questioned, five law enforcement officials told NBC News.

Brooks has not been charged with any crime in connection with the incident and police have not named him a suspect.

The exact circumstances surrounding the incident and what may have motivated it were not yet clear.

Waukesha Police Chief Daniel Thompson confirmed at a news conference Sunday evening that a person of interest had been taken into custody.

Four senior law enforcement officials had said that a person of interest who may have a significant criminal history was being questioned overnight, with investigators probing the possibility that the driver had been fleeing an earlier incident involving a knife fight.

Five sources in a position to be briefed on the incident said that at this early stage of the investigation, there was no connection to terrorism and no indication that it was in retaliation for the not guilty verdict Friday in the Kyle Rittenhouse trial.

An FBI spokesperson said that the bureau was aware of the event but that local authorities would lead the inquiry.

Video from the scene showed the red SUV speeding down the parade route, then barreling into the crowd while a band was playing.

The vehicle went through barricades set up for the parade before striking people, Thompson said.

An officer opened fire at the SUV in an attempt to stop it, said Thompson, who added that police were no longer searching for the vehicle.

On Sunday afternoon, spectators gathered along the street in downtown Waukesha to watch the procession of floats, classic cars and children dancing. Right before the incident, video from the scene showed spectators both standing and sitting in chairs, watching a marching band perform.

When the vehicle plowed into the crowd, spectators began to scream. In the minutes after it happened, people cleared the area.

A group called the "Milwaukee Dancing Grannies," whose members are grandmothers, said in a statement on social media that "members of the group and volunteers were impacted and we are waiting for word on their conditions."

"Please keep the Grannies, all those injured, and all those who witnessed this horrible event in your thoughts and prayers."

Parade attendee Jaymz Touchstone said he was watching his daughter's band playing when the vehicle "swerved around the big truck right behind the band and then accelerated through the band and down the street."

"I tried to pursue the car. I couldn't. I turned around and came back and started to render first aid to the people there," Touchstone said. "The kid that I was rendering first aid to … his feet were crushed. They ran over both of his legs. He hit his legs, got trapped under the tire."

Thomas Kluka, who said he goes to the Christmas parade with his family every year, said when he saw the SUV barreling toward him, he threw his daughter out of harm's way and the car came within 2 feet of him.

"I could've touched the car going by," he said.

Angelito Tenorio, a candidate for Wisconsin state treasurer, said he just finished marching in the parade with the Waukesha County Democratic Party when the vehicle sped down the route.

"People [were] running away from the scene, leaving their belongings behind, looking for their kids, family, friends," he told MSNBC. "It looked like there were folks on the ground lying who may have been struck by the vehicle."

Scott Greger, a Waukesha resident, said he witnessed the vehicle strike someone, continue and then hit a float.

"The red SUV came barreling down the street — very, very high rate of speed and hit a pedestrian," he said.

He said the SUV's presence was preceded by police sirens in the area.

Greger described the route as "full" with marchers and spectators. The event in suburban Milwaukee, billed as the Waukesha's 58th annual Christmas Parade, had been canceled in 2020 as a result of the pandemic.

Waukesha resident Jesus Ochoa, who attended the event with his wife and 3-year-old daughter, described how the parade continued marching in the moments just after the incident.

"It carried on because no one realized yet because the SUV, in the spot where we were, it didn't pass in the middle of the street, but it passed on a side," he told Reuters.

Area hospitals reported treating at least 28 people from the parade, including 15 who were taken to Children's Wisconsin in Milwaukee and 13 at Aurora Medical Center in Summit. Aurora said in a statement that three of those patients were in critical condition.

At least one Catholic priest, as well as multiple parishioners and Waukesha Catholic school children were injured, according to Sandra Peterson, a spokesperson for the Archdiocese of Milwaukee.

Roads in the area of the incident would remain closed, as would businesses, the city said on Facebook. Classes were canceled for Waukesha public schools Monday.

"I'm grateful for the first responders and folks who acted quickly to help, and we are in contact with local partners as we await more information," Wisconsin Gov. Tony Evers wrote on Facebook Sunday evening.

Evers ordered for flags to be flown at half-staff Monday as a mark of respect for the victims of the parade.

The White House is monitoring the situation, according to a statement.