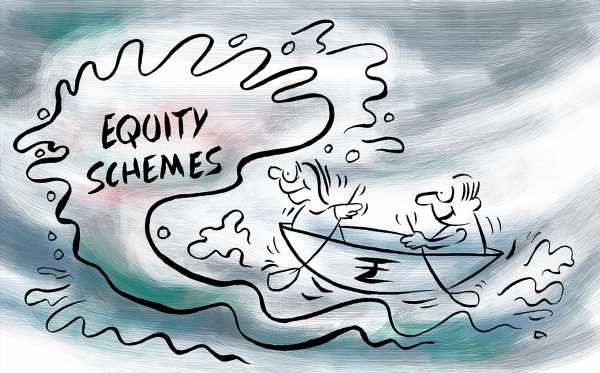 Equity flows turning positive could give fund managers firepower to invest in the markets.
brThis could come in handy as flows from foreign investors have tapered off amid rising bond yields in the US.
Chirag Madia reports.

There are signs that the Rs 31 trillion asset management industry has turned a corner in terms of investor flows into equity-oriented schemes.

Several equity sub-categories have seen an increase in assets under management (AUM) on a month-on-month basis, according to data from Association of Mutual Funds in India.

And this growth has come despite the markets ending flat last month.

Additionally, MFs turned net buyers in the cash market after nine consecutive months of outflows. In March, they were net buyers to the tune of around Rs 2,500 crore (Rs 25 billion).

Between June and February, equity fund managers have yanked out Rs 1.24 trillion from domestic stocks amid consistent outflows.

Industry players said several MF investors, waiting on the sidelines, got an opportunity to invest as markets came off by over 7 per cent from their peak.

Equity flows turning positive could give fund managers firepower to invest in the markets.

This could come in handy as flows from foreign investors have tapered off amid rising bond yields in the US. Apart from the large-cap category, several other top equity categories have seen their assets edge higher.

Speaking about the change in March, D P Singh, chief business officer at SBI MF, said: “We are seeing a change in the trend in March and people who were sitting on the sidelines have entered after correction in markets.”

The correction gave investors an entry, but the spike in volatility could discourage some investors, say industry players.

“The markets have cooled off a bit. However, the volatility has gone up. We are seeing the markets exhibit wild swings and move in a range-bound manner. This may not be a very encouraging sign. The rise in US bond yields and resurgence in Covid cases are major headwinds for the market,” said a top official with a mid-sized fund house.

He, however, said the rolling one-year returns for many schemes have been phenomenal and investors who invest based on past returns could get enthused to invest.